Is Ljubljana the New Berlin? 6 Reasons it Just Might Be

Ljubljana just might be one of Europe's coolest cities. These six tips will guide you to the best things to see and do in the Slovenia capital. 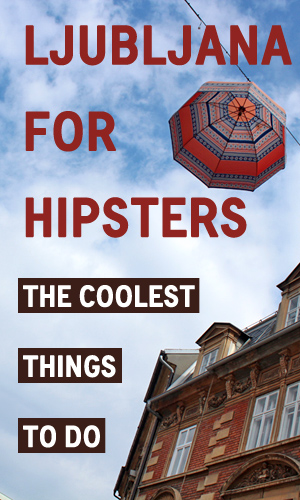 When I told a few of my Berliner friends that I was visiting Ljubljana, I got a mixed response. Some thought it interesting; others were curious how or why I would’ve decided to travel there. But those friends who had visited Ljubljana before — they knew what was up. And they had nothing but excitement for my trip.

Slovenia is one of the world’s newest countries, only gaining independence in 1991. But Ljubljana’s history goes much further. With its location on the edge of Italy, and nestled between the Adriatic Sea and the Alps – the city has long been conveniently placed for many of Europe’s most notorious conquerers. Napoleon’s armies marched through here and the Romans used Ljubljana’s strategic location as a stronghold, calling the city Emona (this year marked with a 2000 year anniversary)! Ljubljana has history.

But Ljbuljana is so much more than its history. As a relatively new nation, and a new capital, the city (much like Berlin) has had to reinvent itself. Thanks to a development scheme which saw the city’s river, Ljubljanica, come to life with new restaurants, bars and markets — Ljubljana’s downtown has come to life with an atmosphere full of languorous (but not lazy) life. Ljubljana has energy.

Why do I compare Ljubljana to Berlin? Most cities are hard to compare to one another, but we all know Berlin has its own special sense of style and atmosphere — one very unique to Europe (and maybe the world). But my extended weekend in Ljubljana only taught me that there’s quite a bit of cool in other cities as well. And in Ljubljana, there’s a whole lot of it.

The Coolest Things To Do in Ljubljana

Undoubtedly the coolest part of Ljubljana is the area referred to as Metelkova City. A former military barracks, it is now an autonomous region of Ljubljana. The Yugoslavia army once had its base there, along with a prison, but soon after Slovenia gained its independence, the area was squatted by artists. The area is now home to the city’s best boutique hostel and countless bars & clubs. It’s also where you’ll find some really unique public art and graffiti.

Visit Metelkova by day to check out the street art, or on Friday nights for the best nightlife in town.

Drink craft beer on the coolest tour in town

I’d never taken a beer tour before being on Iva’s “Craft Beer Tour” through Ljubljana so I wasn’t sure what to expect. I’ve taken brewery tours, but a tour just about beer? Never before. It was a casual walking tour and we visited four different bars to sample beer and some tapas in each. We learned a tiny bit about each of the breweries but what I enjoyed most was the company. This didn’t feel like a tour but more like an afternoon of hanging around with friends. Plus besides discovering at least two beers that I really fell for, three of the four bars were places I definitely was eager to return to–whether for their food, beer or atmosphere! It was the perfect introduction to the city and that special “Ljubljana atmosphere.”

Best way to get around? On a bike!

Ljubljana isn’t a big city and in fact I spent most of my weekend there walking between places. But next time (and there *will* be a next time!) I’ll definitely rent a bike. The city has plenty of bike lanes and the roads seemed relatively safe. Plus like many other cities around the world, Ljubljana has its own official bike share program. The first hour of the bike rental is free and you can register for a week to be able to use the bikes at your leisure for just 1€/week! More information at bicikelj.si.

As I mentioned earlier, I’d heard good things about Ljubljana before visiting, but something that everyone somehow missed out on telling me was how good the food was. My visit to Ljubljana was timed with the launch of Taste Ljubljana—an initiative by the official tourism organization to promote local culinary food and recipes. So during my long weekend in Ljubljana I had the chance to sample some of the best local cuisine – from cottage cheese pancakes (yumm!) to fried chicken and beef tongue… just about everything I put in my mouth while in Ljubljana left me hungry for more!

There are also countless quality restaurants in Ljubljana. It seems the locals know how to live the good life and are after fresh ingredients and quality food in their meals. My top three meals were at the JB Restaurant, Restaurant As and Gostlina Na Gradu. Look out for more about them later on in this blog.

TRAVEL TIP: Check out the Taste Ljubljana travel guide for free on the VisitLjubljana.com website. The free book and pamphlet includes recipes as well as restaurant recommendations on where to find local Ljubljana food dishes. More information on the official tourism website.

Spend your time hanging out by the river

Most cities with rivers running through them tend to focus a lot on the riverside. And Ljubljana is no different. Thanks to some political foresight, the area around the Ljubljanica River has been developed over the past decade to become the “it” place to be in Ljubljana. From markets to some of the city’s best bars and restaurants, everyone seems to spend their time along the river.

I love visiting art galleries in unexpected places. And I’m not sure why, but Ljubljana has more than its fair share of art galleries, photo exhibitions and museums for a city of its size. With a Ljubljana tourist card, some of the museums and galleries offer free admission, but some are free of their own right regardless. Here are my picks for the best museums/galleries:

Ljubljana is serviced by an international airport with flights to other European cities. However, it’s sometimes more convenient and cheaper to fly into one of the neighboring countries’ airports and take an airport transfer to Ljubljana. From Berlin, I was able to get a cheap enough flight on EasyJet direct to Venice, and then it was just a 2.5-3 hour transfer via GoOpti. GoOpti offer airport transfer routes between destinations in Austria, Croatia, Germany, Hungary, Italy and Slovenia.

I visited Ljubljana with the travel blog group The Travel Mob and with the support of Visit Ljubljana. More information about the #TasteLjubljana blog trip can be found here. Special thanks also to the guys from Luxury Slovenia for many of the recommendations here.