I’m going to try to write this one quick. This review of Beira-Mar has been sitting in my drafts folder for a week already, but I just couldn’t find the words to put down onto paper, but I’ll give it a try now.

Last Saturday, after watching 45 Years (a film that brought two awards to the two lead actors), my friends and I made our way to the showing of Beira-Mar. Like so many of the Berlinale films I went to this year, Beira-Mar wasn’t on my original list of must-sees—but I’m glad I was roped into seeing it.

The film tells the story of two teenage boys on a short journey of self-discovery. They each have their own issues and while on a short trip together to the Brazilian seaside (one of my favorite places to think, if you remember…), they must resolve them. Each boy needed to come to terms with his own problem.

From here on out, I may write some spoilers, so, uh, yeah—watch out. I’m sorry, but this movie just makes me want to talk.

Clearly, by this point, you’ve probably figured out that one of the boys in the film is gay. And what made Beira Mar so charming and so sweet, is the way that his “coming out” is told. For much of the film, you might assume he’s living a closeted life, but as it turns out—the boy is already out and his internal struggle is simply about telling his friend. Once the friend figured it out, though, he’s totally cool with it—and simply offers a cigarette. The coming out experience isn’t fraught with problems. And there’s little worry about it. It’s just the awkwardness between two teenage friends.

That’s what I loved about this film. This gay film doesn’t tell a bad story—there’s no struggle for equality, no serious drama about coming out. I appreciate so much of gay/queer cinema, but much of it tends to focus on extreme problems or extreme drama. Or stereotypes. But this story. This story does not do that. There’s a sweetness to the story, a youthfulness—and, importantly, also a realness. Not everyone has a bad experience coming out. And those stories are just as worth sharing as the others.

In the post-film question and answer session with the director and actors, there was a woman from the audience who did ask why they didn’t talk about the problems or politics of coming out, or of being gay in Brazil. The director responded that he felt it was important to tell *this* story. It was a movie he would’ve wanted when he was younger. Ultimately, that’s what I loved about this film. Sometimes it’s good to hear—and good to tell—a good story. There was drama in the film, of course, but it was soft and understated. A drama that was matched with the careful choice of colors throughout, of the music, of the sounds of a deserted beach town on a winter day.

Another point that stood out from the Q&A: The two directors/screenwriters, both young, explained that they needed to create this movie, to tell this story, while they themselves were still young (it’s their first film). And that’s an important point. Youthfulness is an often sidelined quality, but as I’ve learned over the past 10 days while watching multiple films dealing with the topic of youth, I’ve remembered just how important youthfulness is. Not just for telling a story, but as a quality of life. This movie, Beira Mar, tells a story of youth I can relate to (despite not being from Brazil). It’s also a story of friendship. But ultimately what I took away from the film was a respect for youth.

The director duo also explained in their post-film Q&A that the story is based on reality, that the characters were built off of some of their own experiences. Though they emphasized that it’s a story that shouldn’t be told nostalgically, hence the reason to create the film while still young themselves. It only makes the film’s story that much more real, that much more relatable. Even more so, because one of the actors was even discovered via Facebook. How’s that for a generational film?

Besides the storyline of Beira Mar, the film stood out for its overall quality. There were only eight actors in the entirety of the feature-length film. And with the white, blues and pale colors throughout, there was a sense of loneliness I think we’ve all felt as kids. This loneliness was reflected in the acting, as well. There were parts of the movie that were quiet, or still—and there were awkward silences—but it was never boring (kind of like my own youth). The silences seemed to have a meaning. Or at least, as an audience, you felt as if you were right there. The silences were easily filled with your own thoughts.

The film was shot in a very cool, very intimate style as well. There were very close shots, with some scenes even passing between in- and out-of-focus. During the post-film Q&A, the directors explained the meaning… The camera was meant to make the audience feel like a third person looking back on a memory. Even the blurriness was reminiscent of faded memories that often get filled in with half-forgotten stories. The intimate film style only added to the allure of the story.

This movie definitely was made for my generation—and I’m sure that’s why I felt so connected to it. I only cried once, and it wasn’t a hard cry. But it was because of understanding. I felt a connection to the characters (the film style helped with that). And I cried because of a closeness to the story.

If you’re looking for a sweet and tender story about two adolescents, a contemporary story that tells what it’s like to be a teenager solving relatively simple problems—this is your movie. It’s well worth watching.

Read more about the Berlinale International Film Festival on travelsofadam.com! 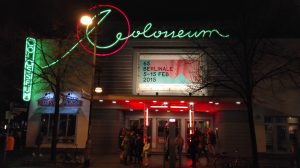