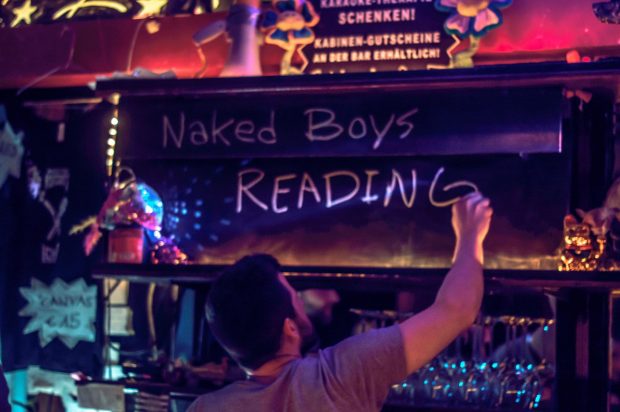 Last week I finally had the chance to attend one of the Naked Boys Reading events. The group started in Shoreditch (where else) but they’ve finally held their second event in Berlin in preparation for the gay pride weekend. The event, as you probably guessed, is exactly what it sounds like: it’s a bunch of naked boys reading. Actually, it’s just six.

For the record, the guys that read are the ones that are naked, while the audience is fully clothed (in some tepid sort of CMNM fetish). The Berlin event, hosted by local drag superstar Pansy and the London-based founder Dr Sharon Husbands, went off surprisingly well, in my opinion. The readings were curated by David Hoyle, a queer performance artist from the UK. Stories focused on the theme of “pride” and not just gay pride. There were readings about Kaiser Wilhelm, transgender activism, San Francisco and even some German poetry thrown in for good measure. I’ll be the first to admit that not all the readings were spectacular, but the atmosphere at the event was all I really cared about. And that atmosphere was pretty fantastic. The crowd was fun and giggly, the bar (Monster Ronson’s) was as quirky & cool as always and the drag star hosts kept the atmosphere lively and energetic.

And of course, while the fact that there were naked guys on stage was certainly appealing, the novelty wore off pretty quick. And after that it was really just about listening to some offbeat readings. Some were political, some were just kind of goofy, and while some of the readers were visibly nervous, others really knew how to take command of the crowd. There’s something exhilarating about watching a naked man try to win over a crowd with his words, with his speaking ability.

One of the most interesting performances of the night was, coincidentally, read by my friend Jared. Reading an excerpt from The Gay Manifesto by Carl Wittman (written in 1969), Jared’s passionate performance stirred up the crowd in ways the other readings didn’t. The Manifesto is a bit extreme at points, but, for being written in 1969, it was still surprisingly prescient and I could definitely relate to some of the ideas. Read the full manifesto here.

For me, the Naked Boys Reading event was less about the nudity and more about the spectacle of the performance. Of course, it’s the naked guys which draw in the crowds (and fwiw it was a mixed crowd, probably 60% gay guys and 40% women), but it was Pansy’s on-stage presence (and her co-host Dr Sharon Husbands), plus the readers’ performances, which really made the show. It’s definitely an event I’d attend again. 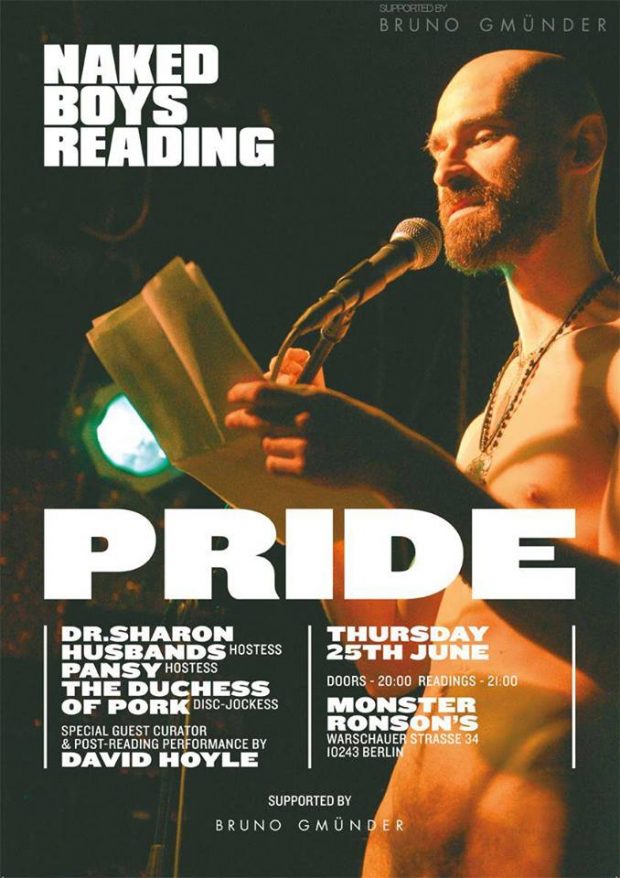 The next Naked Boys Reading event in Berlin will take place in October. But there are regular events almost every month in London, so check the NBR Facebook for the latest information. If you want to read at one of the events, it’s pretty easy, too — simply get in touch with them and express an interest. They’ll match you up with a date and a reading.