At the moment I’m here in Edinburgh, here for the crazy atmosphere during the month of August when a handful of festivals are playing. Maybe the most famous of the bunch, the Edinburgh Fringe, has been an eye-opening experience. A mix of professional and amateur, of street performers and actors, comedians and fire-breathers, cabaret dancers and sometimes just a guy in a thong. I’m absolutely blown away by this city, the people, the festival, the atmosphere. It all feels so authentic and real, so cool and clever and funny and sad and happy and scary. And thought-provoking. There’s the crazy and the weird, but also the professional and the legitimate.

It’s honestly like a wonderland here. Hard to capture. I’ve been sharing mini-reviews and updates on Twitter all weekend, but over the next week(s), I also want to share my thoughts and experiences from each of the shows that I’ve been lucky enough to attend.

I walked into the courtyard of the Pleasance Theatre, not knowing what to expect. This was my first Fringe Festival experience. I’d only just arrived in Edinburgh not more than an hour or two earlier and really had no clue what the Fringe would be like. I’ve heard about the festival for years, of course, and all I knew was that it was a mix of events ranging from random street performances to theater, with every type of actor/performer in the city, all presenting on a huge variety of sets and locations.

In the queue for Trans Scripts (ticket pre-purchased!), I learned (via Instagram, from my friend David) that the show had just recently won the most prestigious award at the Fringe, the Scotsman Fringe First Award. Hence the big crowds outside.

Once inside the upstairs theatre, I immediately got the sense of what the Fringe is about. Despite the big publicity and the award-winning show I was about to see, the theatre was small, hot and cramped. A fan was turned on in the corner to try and get some fresh air moving before the performance started. The rectangular room featured a minimal set, and just three rows of seats. It reminded me of the small community theaters that I’ve frequented around the world. And yet this was an award-winning show at one of the world’s most highly regarded performance-based festivals, and with actors who have appeared in Hollywood movies with countless film and TV credits. It all felt very…democratic.

The door to the theater closed and the performance started simply. Six women on stage, sitting and standing in various poses, with simple square boxes as the only props. Each women took turns speaking, telling small tidbits of different stories—all factual accounts. I sat there scribbling notes and quotes. Be a boy. So much baggage around sex. Transition is a confidence trick.

The beauty of the performance was the constant movement. Each protagonist was equally strong, and while their stories told individually would certainly be moving, told together they created this intimate conversation—not just amongst themselves, but with the audience as well. Their fluid movements, graceful and poised, kept the attention on their stories, only accentuated when necessary with grand gestures. Their stories were as diverse as they were. Stories of chuch, shock therapy, Madison Avenue, Jerry Springer, Cocaine and Halloween. And while it was very much about their own personal stories, they brought out the bigger picture, too. Talking about Stonewall and Christine Jorgenson and Sylvia Rivera, ethnicity, prostitution, politics.

The conversation ended with a strong, empowering message: “I am a woman of transsexual experience…We are the fucking embodiment of the American dream.” Trans men and women have been making headlines recently. Trans Scripts does an excellent job of bringing the topic to life, making it easy for anyone to understand and appreciate. I don’t think I’ve ever felt so comfortable, so empowered, so understanding.

Trans Scripts is playing daily at 3pm until August 31 at the Pleasance Theatre. Get tickets at www.edfringe.com. View the show’s official website at www.transcripts.org. Ticket prices from £6 to £9. 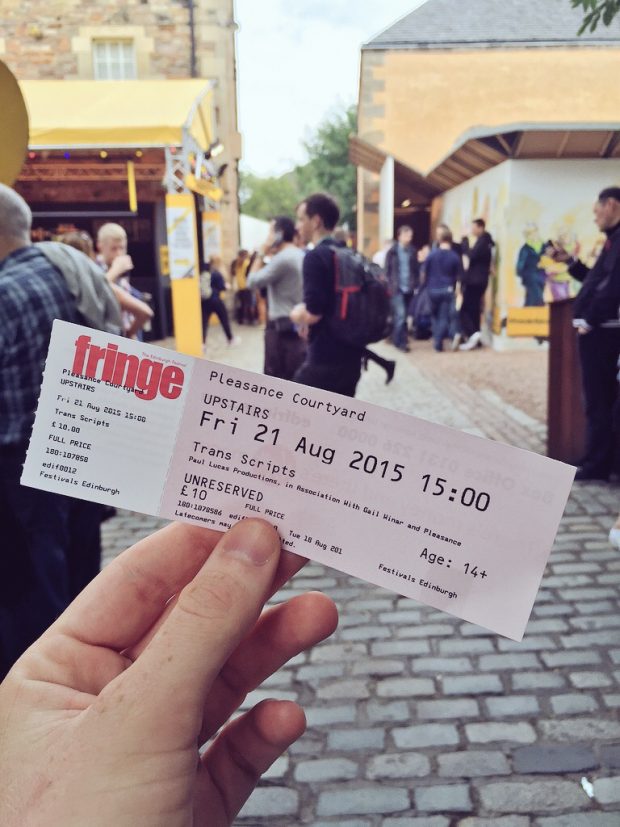 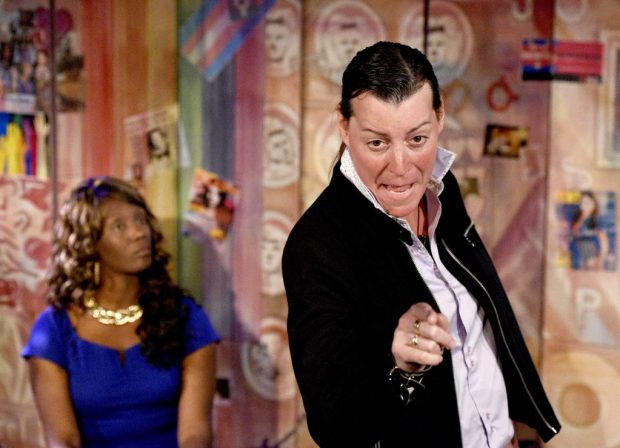 Special thanks to Edinburgh Festivals for their support during my stay in Edinburgh. Visit www.edinburghfestivalcity.com for more information and to buy tickets for festival events. More information about the Fringe Festival can be found on their official website, www.edfringe.com.