From snails in the paella to a beach vibe and city culture, Valencia has a lot to offer the modern tourist 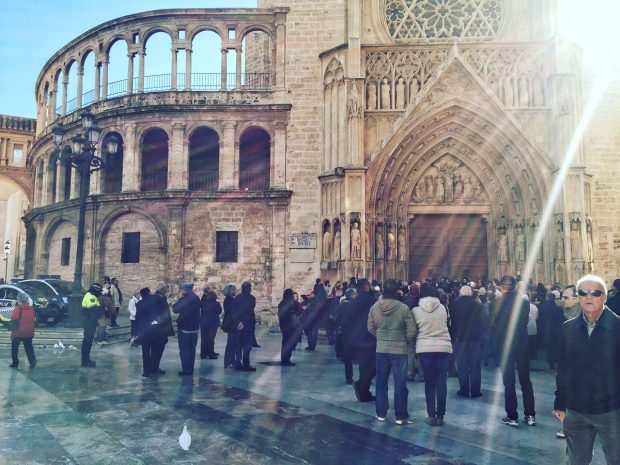 It’s no surprise that Spain is one of my favorite countries. I’ve visited approximately one million times and returned to different Spanish cities on multiple occasions. In fact, Valencia was one of the first cities I visited on one of my earliest trips to Spain. I first visited on a backpacking holiday. Over four weeks in Spain, I opted for one full week in Valencia to relax on the beach, enjoy some quality local drinks (looking at you, horchata) and ride a rented bike through the city’s most unusual park—the former River Túria.

During that first trip to Valencia, I also discovered something unique about the city. The fact that their local food was a little bit different than other areas of Spain, that their green spaces were bigger and easily accessible, that their architecture was both weird and majestic—the city captured my innate interest for someplace unique. I was mesmerized by the creativity, by the specialness of the city.

Stumbling from cool café to cool café, I found Valencia to be one of those cities that had all the trendy trappings of a big city, but approachable and easy-to-discover like a small town. Even as Spain’s third largest city, after Madrid and Barcelona, and with its prime location on the Mediterranean, it offers the same pleasures of the other Spanish cities but often cheaper and more affordable. Magic. 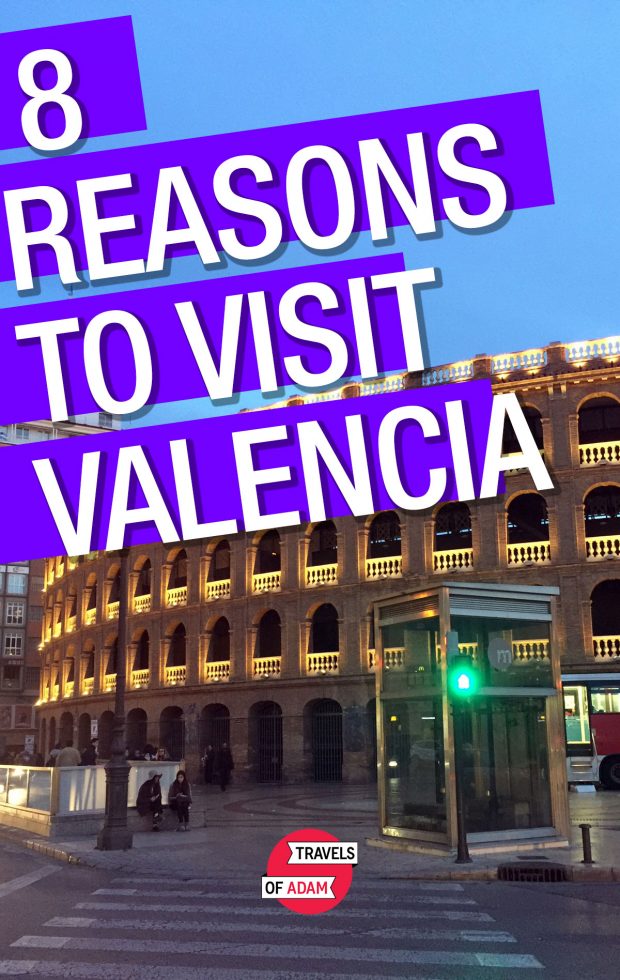 Maybe it’s the fact Valencia is an unpretentious city—one that sits in the shadows of Madrid and Barcelona but with an equally important place in Spanish culture. With its location between rice fields and the Mediterranean Sea, fresh food comes easy to this unobviously large city. That’s probably why Valencia is home to Spain’s largest fresh food market, El Mercado Central. And because the city lacks the pretension of other large European cities, Valencia’s best restaurants are accessible to just about anyone. It’s possible to get Michelin-starred food for affordable prices from some of the world’s most renowned chefs. What a bargain!

Try the Macellum Restaurant‘s tasting menu (served on beautiful plates and platters made of trees) for a romantic dinner, or the casual-but-cool style of the Mercat Bar (from a 4-Michelin-starred, Valencian chef) in Ruzafa. Ricard Camarena’s Canalla Bistro also runs some great lunch specials where you can sample his award-winning cuisine for under 10€ (try the kebab!). Or look for restaurants and local shops set up in the city’s many food halls and markets, like the Ma Khin Café in the basement of Mercado de Colón.

While Valencia’s most creative chefs are serving up new and contemporary meals at the city’s trendiest restaurants, the local cuisine still holds a special place here. Valencia is the birthplace of paella—that most quintessential of Spanish foods. With the nearby rice fields and the fresh seafood from the Mediterranean, it’s no surprise that the Valencianos put the ingredients together to make what’s arguably Spain’s most iconic food dish. Paella is a serious affair Valencia, usually eaten at lunchtime and shared between at least two people. The most typical Valencian paella includes meats like rabbit and chicken, plus snails and vegetables. Paella is widely available throughout Valencia (and Spain, for that matter), but this guide from Urban Travel Blog outlines some of the more popular local hotspots. In addition to paella, Valencia is famous for other traditional Spanish cuisine, including horchata and Agua de Valencia—a lethal cocktail of cava, orange juice, vodka and gin.

Valencia’s most famous tourist attraction is the weird-but-wonderful City of Arts and Sciences complex. The complex consists of several buildings for cultural and educational activities, including a science museum, aquarium, planetarium and IMAX cinema. Designed by local celebrity architect Santiago Calatrava, it’s perhaps the most iconic symbol of the city. Inside the Turia river bed (now converted into a park), the City of Arts and Sciences towers over the city as this strange, alien-like series of structures. It’s free to wander around and great for a selfie, but if you want to see the inside, you’ll have to book a ticket to one of the different attractions. 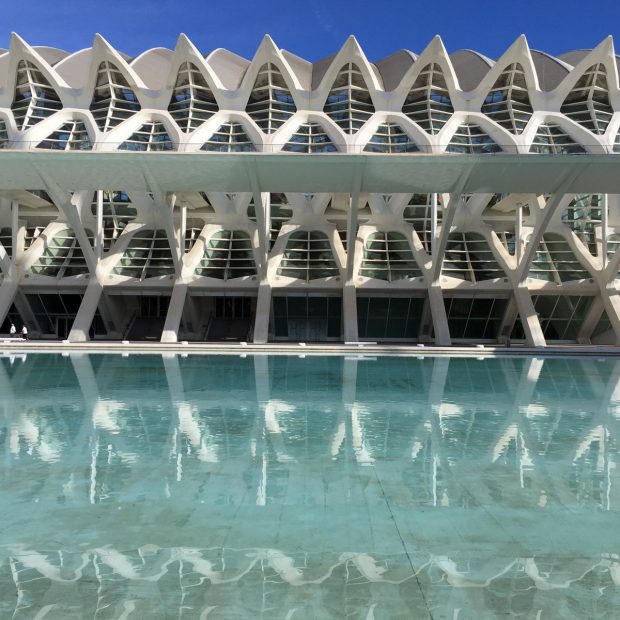 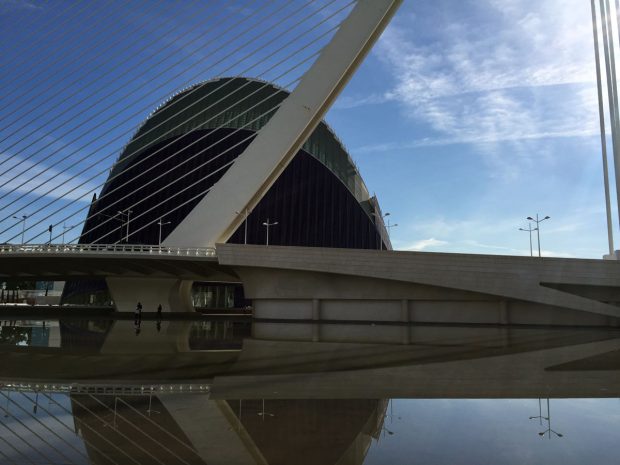 So close to the sea, Valencia is a relatively flat city which makes it quite easy for getting around by bike. But perhaps the most bike-friendly aspect is the fact that Valencia has turned its dry river bed into a 9-km green space through the city center, the Jardines del Turia, one of Spain’s largest city parks. The river was diverted after a disastrous flood in the 1950s and today the green space is home to sports parks, the City of Arts and Sciences, museums, children’s playgrounds and a nature park—making it one of the best spots in Valencia for cycling, running or picnicking. There are a number of bike-rental places in the city center, especially in the Old City. Try Solution Bike Rental for 10€/day, 24-hour rentals, or the city bike-share system.

Because of the city’s unique location near the Mediterranean, but not exactly *on* the Mediterranean, there are two very different vibes that you get when visiting. From the city center, near the main Valencia train station, to the beach is just a short 6km, easily accessible by bike, walking or on the public transportation. But in speaking with locals, there’s a bit of a divide between the city and its beach. It’s like having two cities in one, with a beach city and the full-on beach vibe (sandcastles and cocktails on the beach) to the

• • •
Traditional culture in a modern city

Like most Spanish cities, Valencia has its traditions and they’re taken very seriously. Each Spring, the Falles celebration takes place in Valencia with a series of neighborhood “burns” where monuments (Falles) are burnt in small-but-loud celebrations. The historic festival has apparently been going on since the Middle Ages. But Valencia’s traditional culture doesn’t just shine on this one week each year. Valencia’s historic city center, the Old Town, has been through a number of different rulers, from fascist times to the Romans and the Arabs. Each has left their mark, from the mosaics inlaid in buildings to the Gothic towers. But in true Valencian contemporary style, the streets of the historic center, especially the northeastern quarter nearest the Turia river park, have been painted over with large murals and artistic graffiti. You’ll also find Valencia’s contemporary art museum, the IVAM, home to traveling international modern art exhibitions and an extensive permanent collection of local and regional artists.

Because of Valencia’s convenient location near the Mediterranean Sea, between Barcelona and Benidorm, the city seems to attract year-round good weather. Even if the beaches aren’t popular in the winter, the sun still shines and there’s plenty of life in the city center to make it a great winter destination. In fact, the city’s architecture seems to reflect this pretty pale blue from the sea and the sky. Calatrava’s City of Arts and Sciences skeleton white design perfectly complements the pale blues from above (conveniently reflected in the reflecting pools throughout the complex). And the historic city center’s sandstone gates and palm trees look of summer all-year. 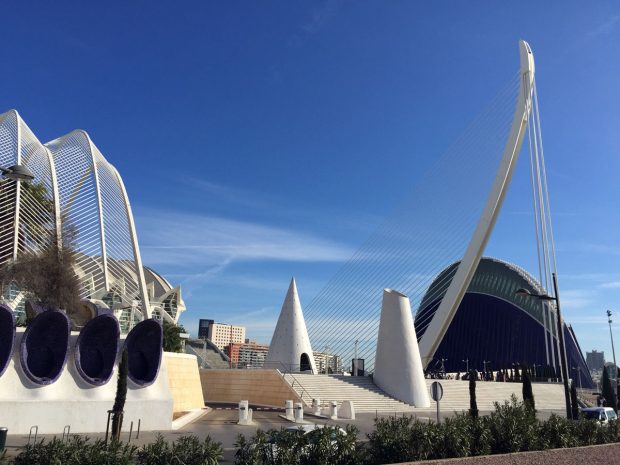 This is something I noticed on my very first holiday to Valencia back in 2010—the city has this creative energy and a vibe that’s hard to describe. There’s something special about a city that’s turned their river into a park, with its many sports and exercise areas, a bike and jogging path, museums and picnic areas. When it was decided to divert the Turia River, the plan wasn’t always to make it a public park. But, the people of Valencia rebelled and insisted on a public open space, rather than another highway. That spirit lives on in Valencia today and helps describe just how alternative and edgy this city can be. Today, it’s the Ruzafa neighborhood where this creative energy lives on—in the trendy lifestyle shops, the hipster bars and the late-night clubs. For some reason, Valencia is also a hub for Erasmus students in Europe, making it a fun and social city—easy to meet others and with a way-of-life that just seems to work with the culture of the people who choose to live here.

My visit To Valencia was part of The Travel Mob blogger press trip (in partnership withValencia Tourism). Read more about my trip to Valencia here.