Florida is a BIG state and with plenty of things to see and do, it's the perfect kind of place for a road trip. Here's what you need to know to make the most of driving in Florida

My third, or maybe fourth, day on the road and I finally reached the Florida border. Coming from Savannah, Georgia, I made my way down I-95 into Florida with little fanfare: my Google Maps app announcing “Welcome to Florida.” It was already dark, but I was relieved. The final stretch of my I-95 road trip from NYC to Miami (give or take a few hundred miles).

When I first announced I was going on this road trip—as a favor to my aunt who needed her car down south—just about everyone I knew warned me about Florida. “Florida is big,” they’d say. I know, that, of course, but I’d kind of forgotten. I’ve done one other Florida road rip about a decade ago. I drove from tip-to-tip, from Key West all the way up iI-95 and then across the panhandle en route to New Orleans and, eventually, Dallas.

I have a few distinct memories from that road trip—passing what seemed at the time, the Everglades, indistinct cities from the highway and a long (very long) dark road. Almost the entirety of our road trip back then felt like it was in Florida, and that’s what I was expecting this second time around.

And it kind of was.

After driving through Florida for D A Y S, here are my tips to enjoy your own Florida road trip. The things you need to know to make the most out of driving through America’s penis.

FLORIDA ROAD TRIPS
All the things you need to know

Google tells us that Florida is 65,700+ square miles with 20 million people. And we already know that this state takes up a lot of space in our news—that Florida man is fucking everywhere

But here’s the thing: because Florida is a peninsula, and because (arguably) its best bits are at the very tip, it just takes F O R E V E R to get anywhere in the state.

Driving in Florida also seems to just take forever not just because of the distance required, but because of so so many reasons. Not all of them bad, because truthfully, who doesn’t love a leisurely trip on the open road?

Having driven the vast majority of I-95 from New England to Florida, I can definitely say that I-95 is its most boring in Florida. Simply put, there are just fewer rest stops, gas stations, and other amenities along the major artery.

For some reason, after Savannah, there’s just not much along the highway. It’s a lot of trees and open spaces. That emptiness isn’t all bad, though. Of course, it means a bit less congestion, but unfortunately that doesn’t mean safer roads (see the next one).

I hate to make generalizations but after nearly 96 hours on the road and crossing 11 states along the way, the highway felt least safe while in Florida. The roads were actually pretty great (there are major renovations being done along I-95 to be completed this year), but the drivers—they were awful.

I was cut off regularly during my most recent 10-hour drive through Florida; drivers would ride on my tail and cross across lanes to get ahead. It was frightening and uncomfortable and required some serious alertness

And smooth! Most of I-95 was remarkably well-maintained and even with construction here and there, it was all clearly marked and felt safe and comfortable. The flat roads make it easy to move (sometimes too fast—watch out for the highway patrol!).

Along the interstate highways and the Florida turnpike, rest stops and travel centers were well-stocked and clean. For anyone traveling long distances, these are really useful and important, and Florida seems to maintain them pretty well. There were signs just about everywhere about nighttime security at every rest stop, for better or worse—a little bewildering how much of a point they made about it, but maybe that’s an issue.

6. The SunPass is really useful

The Florida Turnpike runs the length of the state and while your route is what’s going to play a role in whether you take it or not, it is a pretty useful throughway for much of the state. Getting a SunPass provides easy access to the Turnpike and it can be purchased at Florida welcome centers along the state’s borders.

The SunPass isn’t necessary for accessing the Turnpike as you can also get tickets and pay cash, but be warned that without the SunPass, some turnpike exits aren’t accessible. I’m not really sure why that’s the case, but I did spot at least one exit along the turnpike which was for SunPass users only.

7. There will be traffic

Oh my god will there be traffic. I don’t really understand why because it’s my understanding that most Floridians are pensioners, but rush hour exists in Florida and it is A N N O Y I N G. I know that’s probably universal, but the traffic around Fort Lauderdale and Miami was nerve-wracking. Luckily the weather’s good so sitting in the sun isn’t the worst thing.

Which brings us to one of the most important travel tips for Florida: PACK SUNSCREEN! The sun is strong in Florida (duh—it’s the sunshine state!), but don’t forget to use it while driving, too! Your car windows won’t protect you enough and the sun will burn. Be prepared and keep a small sunscreen spray in your car if you’re traveling Florida frequently.

Also: make sure to stay hydrated and drink plenty of water when on a Florida road trip. You never know how bad the traffic’s going to be, or how hot your car might get.

Speaking of the sun, don’t forget your sunglasses! I don’t know about you, but I frequently lose my sunglasses so during my road trip, I kept an extra air in the glove box, plus one in my bag, and another that I wore. I somehow managed not to lose any of them during this trip, but driving without them would have been a nightmare.

Florida is fucking big; we already talked about that. And as one of America’s most touristic destinations, there’s plenty to actually stop and see. I think?

Florida’s state parks are there to protect a lot of unique wildlife, and the big tourist cities like Orlando, Miami, and Key West all have some cool things to see. And of course there are the beaches! I stayed a night in Daytona where you can actually drive on the beach (for a fee) which is kind of fun if you’re into cars and don’t mind sand everywhere. (Trust me: a week in Florida and there will be sand everywhere; there’s nothing you can do about it.)

I rant about Florida quite a bit but I’ve been visiting the state regularly since I was a little kid. There’s always something new to see or experience, and even when there isn’t, the sun & sand more than make up for the annoying quirks of life in Florida. Now: if you need me, I’ll be at the beach. 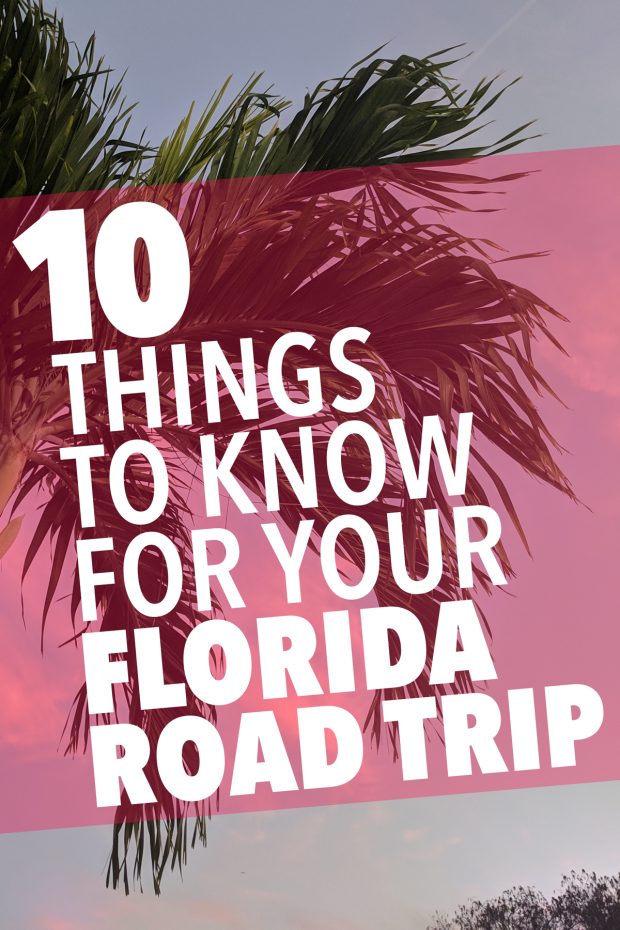