Right beside Berlin, Potsdam is an extremely old city that often gets overlooked and only considered for a daytrip from the capital. But as the capital and largest city in the state of Brandenburg, Potsdam has a lot to see and it can be a very worthwhile place to stay a couple of nights. Start here with my basic Potsdam travel tips, or jump down below to read my latest Potsdam travel blogs.

Potsdam is a great summer destination, since a lot of the sights worth seeing are gardens and palaces! Visiting in fall can be beautiful too, and winter with the Christmas markets (and maybe snow!) can be charming too.

Sanssouci Palace – Probably the most recongisable place in Potsdam, this UNESCO World Heritage Site has been restored to its former glory after damage in the Second World War and a lot of neglect during the GDR times. It was originally the country residence of Frederik the Great in the 18th century, and in its Rococo style, is reminiscent of the Palace of Versailles in France.

Holländische Viertel – Literally, the Dutch Quarter, this area of a few streets in central Potsdam was constructed in the 18th century by Dutch immigrant Johann Boumann with the intention of attract other artisans from the Netherlands to move to the area. The houses are all in the typical Dutch style and nowadays it’s full of cute little boutiques, antique shops and cafés.

Filmpark Babelsberg – A little to the east of downtown Potsdam is this fun theme park all about German film making. The first ever German expressionist film was shot here, and you’ll get to peek behind the curtain and get a look at how films are made!

Although it’s a relatively small place (and in fact still feels like a part of Berlin!), taking a tour around Potsdam will save you time and get you in to some areas of the city you might otherwise overlook, so it’s definitely worth you time to consider one. Take a look at this selection of Potsdam tours.

Potsdam is a small town and doesn’t have a gay scene as such. It’s only 20 minutes by suburban train to downtown Berlin, which doesn’t lack gay life at all!

Potsdam has plenty of hotels,but you should definitely consider booking in advance if you want to stay there rather than in nearby Berlin. I’ve found that using Booking.com, Agoda.com or Hotels Combined can be really useful for finding last-minute deals. 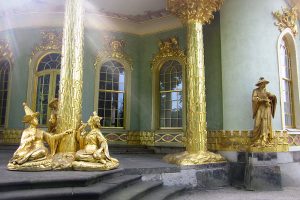 Barcelona, Potsdam and Brighton are all home to some important and extensive Orientalism & Chinoiserie architecture around Europe. 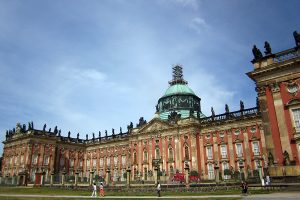