The capital of the south, Atlanta is a welcoming city with a lot of history and culture, making it one of the top destinations to visit in the southern USA 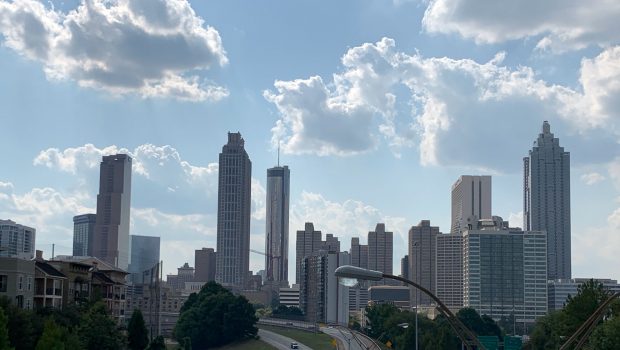 The capital of the south, Atlanta has a lot of history, but also a thriving contemporary culture. An international and regional hub, Atlanta was at the forefront of the 20th century civil rights movement. But its attraction today is in a blend of its unique culture, its southern heritage, and its youthful, energetic vibe. Start here with my basic Atlanta travel tips, or jump down below to read my latest Atlanta travel blogs.

Located in the southern United States (and often called the capital of the south), Atlanta is a great place to visit year-round, especially considering its importance as a business and economic center of the region. Because of its warm, year-long climate, though, the summer months can be especially hot.

Visit in the springtime or late summer for the most temperate weather—when it’s warm and sunny, but not blindingly hot. Some of the city’s biggest festivals and events take place during these shoulder seasons as well.

Atlanta Pride always takes place in early-to-mid October, when the Atlanta weather is still warm, but not too hot. Other big music festivals, such as the pop-heavy Music Midtown, take place in September.

Pemberton Place attractions — Located in the heart of downtown Atlanta, just across from the iconic Centennial Olympic Park, Atlanta’s biggest tourist attractions are in Pemberton Place, named after the pharmacist who invented the Coca-Cola soft drink (founded in Atlanta, of course).

The Georgia Aquarium draws visitors from around the world thanks to its impressive exhibitions and conservation work; it’s one of the world’s largest aquariums. The World of Coca-Cola Experience takes you on a journey through the history of America’s most famous export. Founded in Atlanta, the Coca-Cola drink has had a huge impact on our global culture, and the museum experience here in Pemberton Place is a fun and family-friendly way to learn more.

The National Center for Civil and Human Rights, in the same area, also tells the history of Atlanta and its global impact in relation to the 20th century civil rights movement, especially highlighting local and regional advocates for change, including Atlanta native Martin Luther King, Jr.

Atlanta BeltLine — In East Atlanta, the BeltLine is a green walkway that runs through several neighborhoods. With its mix of nature spots, running & cycling paths, and restaurants & bars, it’s a cool way to experience a lot of the city. Don’t miss the Ponce City Market, a small shopping center and food hall in a historic Sears building.

There are a lot of ways to experience Atlanta, and while it’s largely possible to visit on your own, it’s sometimes helpful to join a tour group to find more unique spots.

One of the best experiences in Atlanta is the Atlanta Movie Tours, where you can discover filming locations for many of the movies and TV series that have been filmed in Atlanta the past few decades. From fan favorites like the Marvel movies and even cult classics like The Walking Dead and Stranger Things, the Atlanta Movie Tours cover a bit of everything. It’s fun for locals and film-fanatics!

Outsiders and international visitors might be surprised to find Atlanta a hotspot for LGBTQ people, but because of its city size and urban vibe, it’s long been a spot for those looking for more freedom of expression.

As the “capital of the south,” it’s also attracted LGBTQ individuals from throughout the south looking for a welcoming city with a southern identity and culture. And because of the diversity and civil rights history of Atlanta, it’s generally welcomed everyone. The 2018 Queer Eye Netflix series also helped to solidify Atlanta as a gay travel destination thanks to the series featuring Atlanta prominently throughout.

A visit to the National Center for Civil and Human Rights offers the opportunity to learn about civil rights leaders and movements both local and international, including the modern LGBTQ rights movement.

Today, Atlanta’s LGBTQ city life is largely located in the Midtown area of the city. At the intersection of 10th and Piedmont Avenues, there’s even a permanent rainbow pride crosswalk. Atlanta’s Midtown area has a handful of gay bars, clubs, cafés and restaurants. The city’s free Peach Magazine lists LGBTQ events weekly and can be picked up in any of the city’s LGBTQ and LGBTQ-friendly locations.

Atlanta’s best and most convenient hotels are located in the Atlanta Downtown district. It’s easy to reach from the airport and close to all of the city’s biggest tourist destinations.

The American Hotel — Part of the Hiltons of Atlanta, The American Hotel is unique in that it’s a building with a lot of history. Recently renovated, the hotel was the city’s first modern hotel, opened originally in 1962 where it was the first hotel in downtown Atlanta to desegregate. The lobby of the hotel is dotted with historical photographs and memorabilia including copies of letters from its opening.

Despite its longstanding place in history, the hotel has all the modern amenities a traveler could want, plus extra touches of cool design features such as an Airstream trailer out by the pool.

Top Things to do in Downtown Atlanta

Read More about Top Things to do in Downtown Atlanta

Atlanta is home to thriving creativity and a cultural renaissance. Discover Atlanta’s hipster hotspots in this guide to the coolest things to do in Atlanta.

Famous for its history in the civil rights movement, delicious food, and southern hospitality, Atlanta has a lot of charm as an LGBTQ-friendly city