Senseware Exhibition at the Design Museum in Holon, Israel 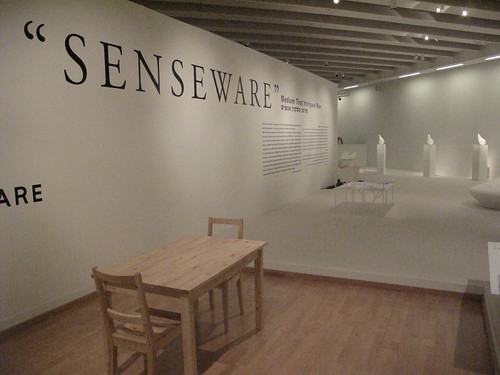 Last week I finally got to Holon to check out the new Design Muesum. I’d first read about it in Time Out Israel (quite possibly my favorite magazine series of all time) over a month ago, so it was nice to finally check out the museum.

The exhibit, titled “Toyko Fiber, Senseware,” was mostly about fabric and fiber. Everything was about touching (but don’t touch the actual exhibits!) and strange, new, synthetic fibers being used for unique purposes.

According to the exhibition brochure…

The aim of this exhibition is to deliberately bring a broad sweep of creators and technology people into contact with attractive new artificial fibers, encouraging them to think of applications that make the benefits of the material visible. Through that approach, the exhibition attempts to show ideas for the future of manufacturing, exhibiting new environmental membranes derived from artificial fibers in order to share them with the world at large.

The museum is rather small (but architecturally beautiful) so there wasn’t a lot of space but they managed to fit in a fair amount of lofty ideas. A lot of people don’t recognize the design value in engineering or industrial design—especially of seemingly undesigned objects. That’s the beauty of design, in my opinion, when it’s invisible. As any product designer will tell you, someone had to design a toothpick.

Some of the pieces in the Senseware exhibit were a bit strange, but that was probably the idea. Get people talking. And thinking. There were a handful of really cool, really fascinating objects, though.

And, one of the coolest pieces in the exhibit, a water-repellent fabric/fiber. They had this gently sloping platform nicely set up with magically appearing water droplets.

Check back here next week for some more information on the Design Museum in Holon, as well as photos of its beautiful architecture.

___
New to travelsofadam.com? Adam is a graphic designer traveling around the world in search of creative inspiration, tasty food & interesting people. Connect with Adam on

RSS for regular updates. Or get even more frequent updates via