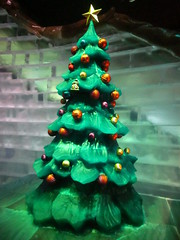 On part of my hometown tour of Grapevine, I visited the Gaylord Texan—a resort and convention center. I remember when the huge building complex was built a few years ago because everyone in town was talking about it. It’s your typical conference center except that it’s in Texas—which means it is even bigger. There’s a water park, a sports bar with a 52-foot screen TV and, during the winter holidays, an ICE festival featuring themed sculptures.

This year’s theme for the Gaylord Texan ICE festival was based on Shrek—one of my favorite kid’s movies. While it may seem absurd to have an ICE festival in Texas during December (when temperatures average above freezing), many people living in Texas don’t necessarily get the chance to experience cold weather.

So the Gaylord Texan brings winter to them in a tent set up outside the convention center. The tent is constantly cooled to remain well below freezing. (At a huge expense to the environment? Probably.) When I visited on a Friday morning, our guide informed us the temperature was a balmy 9 degrees Fahrenheit (that’s a -12 degrees Celsius)…with a wind chill. While, just outside the tent, the temperature was in the 50s (that’s 10 degrees Celsius).

Anyways, the sculptures were pretty cool (no pun intended). That’s probably because they were designed by some of the same skilled artisans from Harbin, China in the northeastern part of the country. If you haven’t heard of Harbin, I highly recommend you read a little bit about it’s amazing Ice & Sculpture festival held each year. Read more about the Harbin festival here. 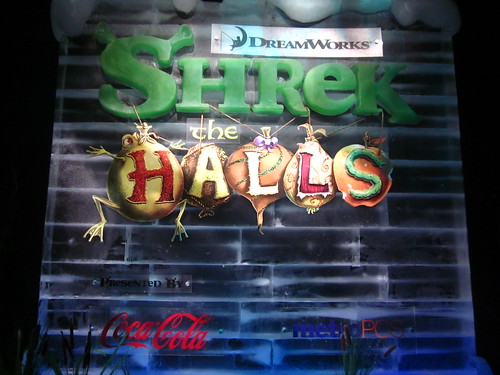 You can tell from this photo how most of the ice sculptures were constructed—with these large rectangular ice blocks. 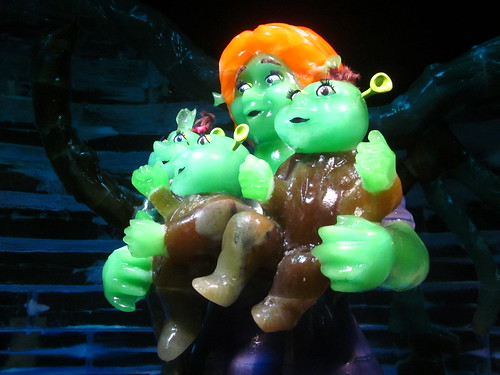 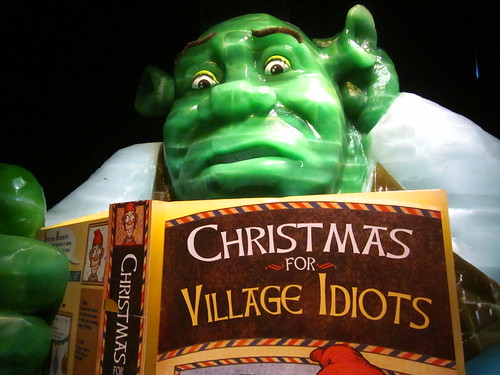 Almost everything inside the ICE festival was made of ice, though there were occasional props, as well. 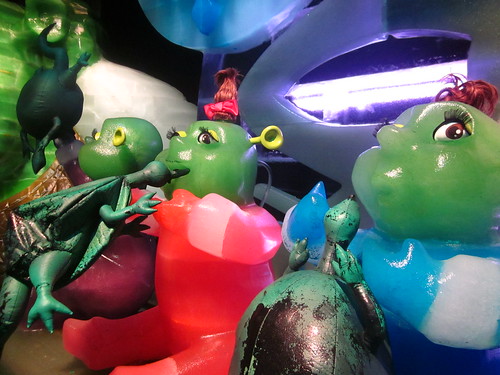 Those dragons playing with the little baby Shreks were inflatable balloons. I think you could even buy the same toys in the gift shop. 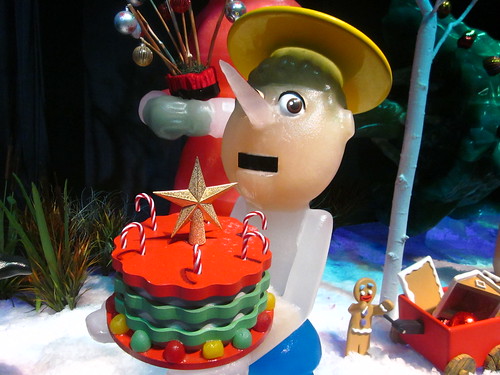 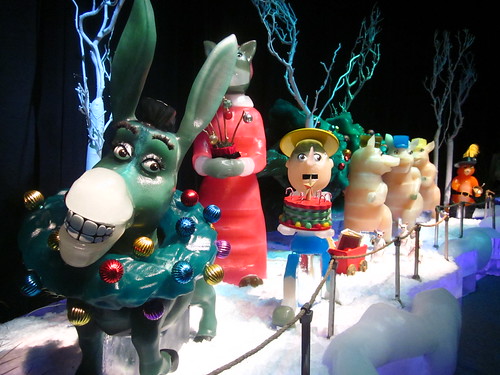 Sorry that it may be hard to determine the scale, but just so you know, these sculptures were practically life-size. 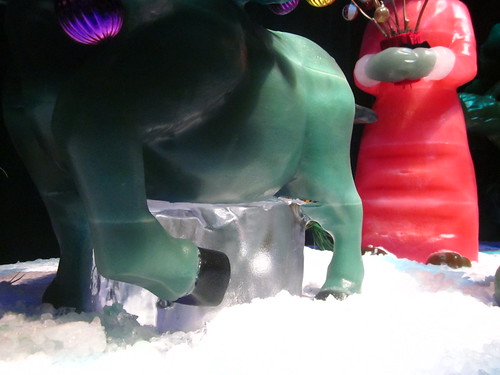 A little bit more detail into how the ice sculptures are made. Donkey is delicately built with a plain ice block for support. 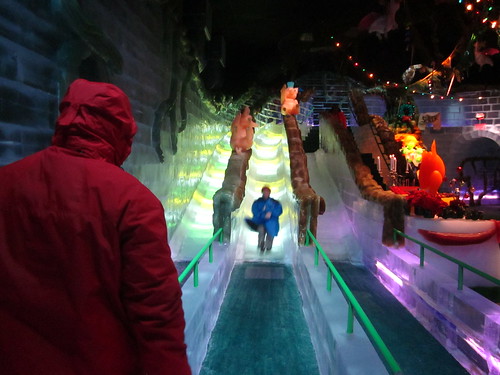 The ICE event also featured an ICE slide that was included in your admission price. It went surprisingly fast. Also, note the blue parka. Everyone was given one upon entering (maybe because us Texans aren’t so used to such cold weather). 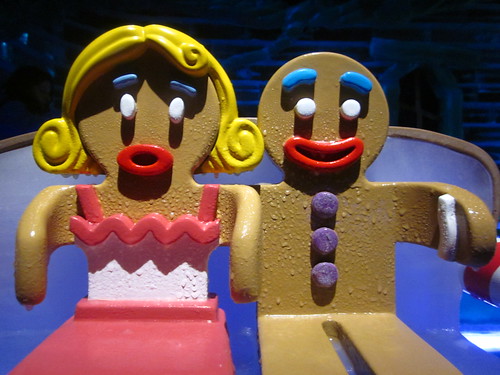 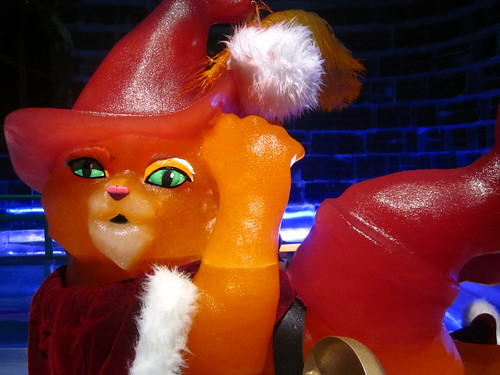 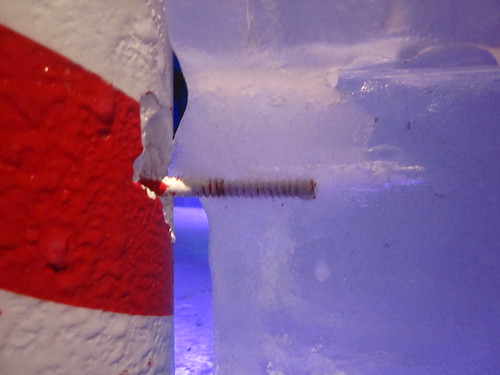 A screw keeps some of the blocks of ice together. 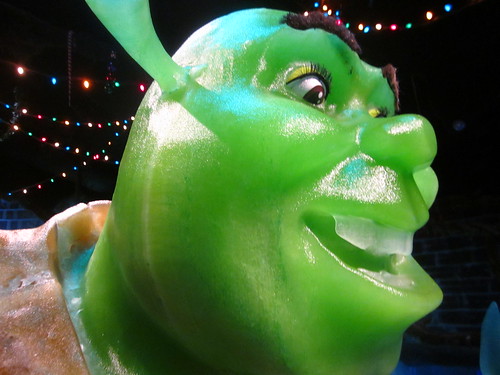 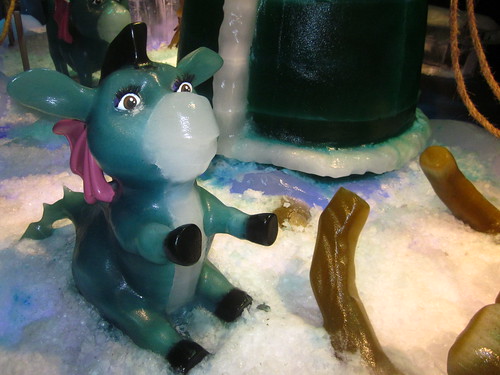 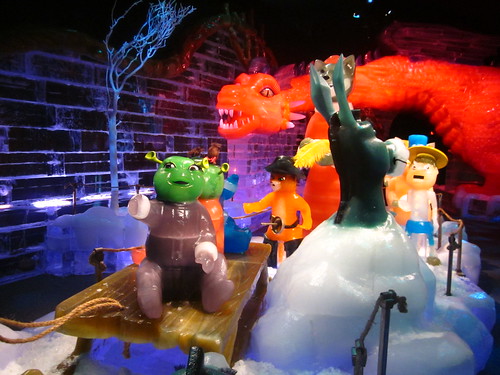 Dragon was impressively big—her long neck made one of the arched doorways you walked under. 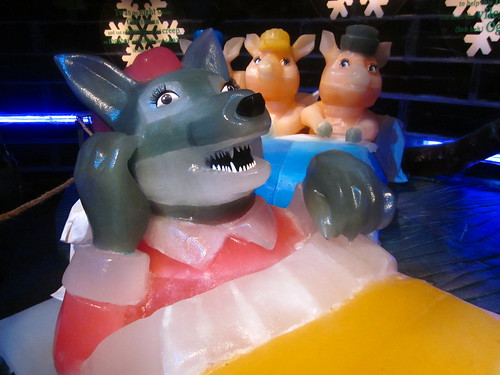 Looks like he’s talking on a cell phone, no? 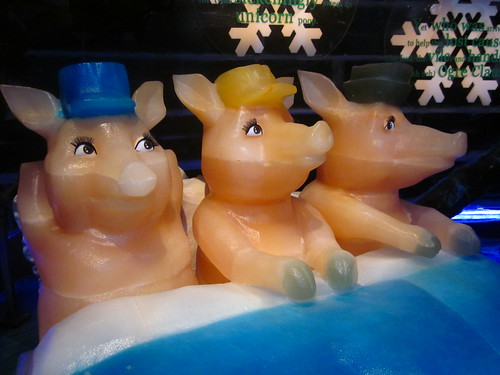 Shrek the Halls ended with the three little bigs in bed. There was one other room following this one with your typical Christmas manger scene.

If you’re interested in visiting the ICE! Experience festival featuring DreamWorks’ Shrek the Halls, tickets are from $15-27. The event will be open until January 3, 2012. More info online here: ICE! Experience at Gaylord Texan.

My visit to the Gaylord Texan was sponsored by the city of Grapevine‘s tourism board. All views are my own.