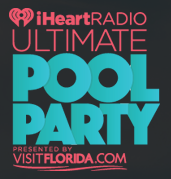 I’ve been to a lot of music festivals in my twenty-something life, and I’ve seen a lot of live music gigs—but last weekend’s iHeartRadio Ultimate Pool Party in Miami is sure to go down as one of the most memorable. Why? It’s the *only* concert I’ve ever been to while dancing in a swimming pool. And a pretty awesome swimming pool at that!

Besides the venue (again: a swimming pool!), the lineup for the 2nd annual iHeartRadio event was pretty sweet. Ke$ha and Pitbull (com’on people – this guy is awesome!) were the big names at the top of the bill, but I was equally excited about hearing the indie bands that played during the day. Krewalla and Icona Pop were particularly fun while I splashing up a storm in the pool. But the initial opening act from Jason Derullo really set a great tone for the day. At the end of his set he actually jumped into the water with the mic and sang from there!

An exclusive television broadcast of the two day event will air nationally in America on The CW Network on Monday, July 15, 8-10 pm ET/PT.

The Pool Party took part in two separate events on a Saturday afternoon & evening. During the day were the opening acts playing on a stage in front of the legendary Fontainebleau Pool. Most of the audience was either in the pool or watching from the cabanas & lounge chairs. And with all the event’s sponsors providing free swag throughout the day, there was plenty of entertainment in and out of the water. Visit Florida (who was also hosting me for the weekend) gave out dippin’ dots ice cream and an icy fruit juice to keep everyone cool. And these sunglasses which pretty much scream the “sunny-state-with-strangely-stylish-and-scantily-clad-sexy-Miamians.” Cool.

The Pool Party lasted most of the afternoon and thankfully the nice weather (hello there Sunshine State!) kept everyone energetic. The iHeartRadio DJs did a pretty solid job of getting the crowd pumped up in between sets. As far as the music goes, Krewalla and Icona Pop were my daytime favorites. Pop music without the pettiness. Krewalla’s song “Live for the Night” is a catchy pop song, but with these electronic undertones that add some sort of cred. And it’s sure to get your head bobbing.

In the evening, Ke$ha killed it with an amazing performance—naturally including glitter and whipped cream. But unexpectedly, Ke$ha’s performance also included animal costumes, a surprisingly lengthy dialogue on her love of balls (yes…those kinds of balls) and a Barbie convertible car. I can’t remember a concert I’ve been to that made me want to laugh, smile and be naked all in the span of minutes. Oh, Ke$ha.

The weekend at the Fontainebleau ended with Pitbull electrifying the crowd. He’s a Miami native and the city seems to love him. I mean, he’s pretty awesome, but this crowd was crazy-in-love! My friend and I opted to catch his set while dancing by the pool—just steps away from the crowd but with significantly more dancing space and fewer sweaty elbows.

I’ll end this post here before I start gushing anymore about my love for live music—yes, even pop music. I snapped a few photos from the iHeartRadio Pool Party on Instagram but to give you a much better sense of Miami’s coolest concert (literally), enjoy these photos courtesy of Clear Channel. Hit that play button on the Spotify widget above to listen to the bands that played and/or hosted the event and enjoy!

Where’s the strangest place you’ve ever seen a concert? I’ve been to music gigs in parks, festivals, railway stations, warehouses and plenty of other venues—but never an aquatic one! If you’re curious what a party in a swimming pool is like, you can watch the iHeartRadio Pool Party concert on TV. Details in the box below. And no need to tell me how worried you would’ve been about pee in the pool. That’s just something we all have to live with but it was totally worth it. And anyways…what’s a travel adventure without embracing a bit of public urination?

An exclusive television broadcast of the two day event will air nationally in America on The CW Network on Monday, July 15, 8-10 pm ET/PT.
ShareTweet
Bloglovin