On the Importance of Lost Travel Memories

This past weekend I saw the movie The Monuments Men. And besides the grammatically awkward title, I found the story compelling and interesting. And no wonder because I once had an intense fascination about that part of the World War II history. As an art history and design student, I always held a slightly morbid interest in what the Nazis wanted to do and (sometimes) ultimately did with remarkable art.

The movie, based on actual events, tells the story of the Monuments, Fine Arts, and Archives section of the Allies during World War II. They were tasked with preserving (and finding) lost art due to Hitler’s obsession with either collecting or destroying world treasures. I first stumbled on this particular history of the war years ago when I read the journalistic novel Is Paris Burning? — a compelling story about the occupation of Paris during the war and the city’s art treasures.

But what stood out the most during George Clooney’s Monuments movie wasn’t necessarily its story, or even its simple but stunning cinematography. It was one particular aspect of the story — the theft of the “Bruges Madonna.” This became an integral part of the movie, but I couldn’t care. All I could think was how I’d seen that very Madonna just two years ago. Having never known about its existence until recently, suddenly I’m watching a Hollywood movie that focuses a good amount of screen time on its history.

I can’t believe they made a movie about that.

That’s the kind of experience only aimless traveling gets you.

The Bruges Madonna is a marble sculpture from the 16th century, similar to the famous Pieta in that it’s also of Madonna and child. Sculpted by Michelangelo, it’s one of only a few works that’s actually outside of Italy. I wouldn’t have known that the Bruges Madonna existed unless I’d just happened to stumble upon it while visiting Bruges. I was there for a music festival and one morning, in my free time, I went sightseeing.

Bruges isn’t a terribly big city — nor is it spectacularly interesting. Perhaps its greatest attraction is just that it’s a very pretty city. Cobblestoned streets, canals, windmills and bicycles everywhere — this is your picture-perfect Belgian city. But tucked away amongst the pretty buildings is the Church of Our Lady. And somehow (I don’t know how), they’ve come to be the home of the very special Bruges Madonna. I saw it listed in a guidebook and after having seen first-hand Michelangelo’s Pieta at the Vatican, I knew this was a similar sculpture I needed to see for myself.

At the time, I didn’t find the sculpture particularly amazing. Maybe it was my mood, the setting, or the fact that it just didn’t touch me in a special way. I took photos while I was there (you see them here in this blog post) but other than that, I filed the travel memory deep into my mind. And I probably wouldn’t have remembered much of it until I saw the Monuments Men movie.

How strange and surreal it was to pick out an obscure object in a Hollywood movie. To be able to say: I’ve seen that! I’ve been there! Those kinds of moments are only possible when you’re willing to let yourself get lost, when you’re willing to let yourself have boring, inconsequential experiences. I maybe spent no more than 10 minutes of my life inside this Bruges church, and here it was a prominent setting, story and theme in a movie. Not all experiences when you travel are big or life-changing. But even those small moments have the power to reach far into your life—months or even years down the line.

God I love to travel.

And for good measure, some of my photos of the Bruges Madonna:

Looking for more travel tips & information on Bruges, Belgium? Be sure to check out my hipster guide to the city which includes restaurant recommendations and a listing of the coolest things to do. 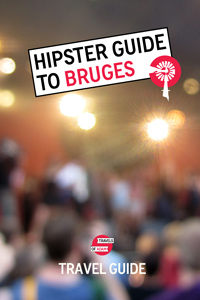