9 Musicians You Should Know from Reeperbahn Festival 2016 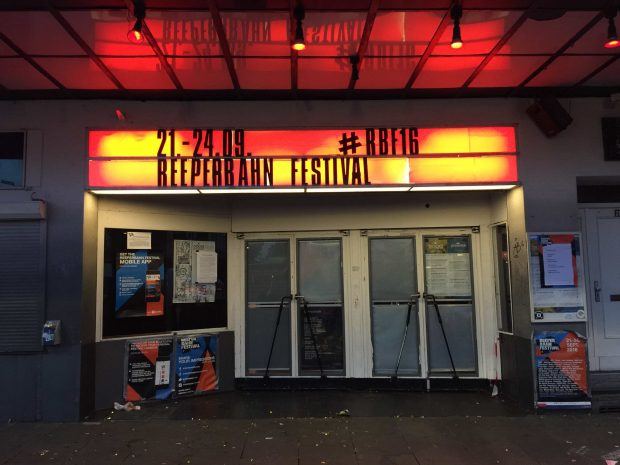 Hamburg’s annual Reeperbahn Festival has, for the past decade, been one of the music industry’s most important festivals in Germany. Inspired by SXSW in Austin, Texas, the Reeperbahn Festival mixes industry insiders alongside new, indie bands and crowds that flock to see the next new band…before they get big. It’s a breeding ground for inspiration, creativity and novel sounds.

When I arrived in Hamburg on the Thursday of the festival, it had already been going on for several days. There’s a tech aspect to the festival, with start-ups from the music industry showing off their goods and networking. I was in town for the music, though.

Trying to find a band to see during a music festival is always a challenge. Multiple venues scattered around the city make it that much more difficult, but at the Reeperbahn Festival, discovering new music seemed slightly easier than usual. The Reeperbahn Festival app was a lifesaver–offering poetic descriptions of every band, gig and performance. I essentially used the app to scan what was on at each time slot and then would randomly select what sounded most interesting by either the band name or the photo. A quick scan of the band description was enough to determine if it’d make my list.

I played the game of “gig roulette” randomly walking into some of the venues at times, too—just to see what was on. With a badge for the weekend, I could stumble in and out of venues (so long as there wasn’t a long queue) and just check out some new music, all while hanging out in Hamburg’s coolest music venues. The festival really gives you the chance to discover new music, more so than most other music festivals I’ve been to. Below are a handful of some of my favorite gigs and bands from this year’s Reeperbahn Festival.

9 Musicians You Should Know from Reeperbahn Festival 2016

One of Germany’s most popular pop groups, BOY played a midnight set inside a church during the Reeperbahn Festival. The band, headed by Sonja Glass and Valeska Steiner, regularly sell out shows in Hamburg and their set at the festival was no different. Their captivating pop songs are marked by charming vocals and a loving audience, only adding to the atmosphere.

Hip-hop artists and soul singer form Berlin, Chefket has collaborated with some of Germany’s biggest names in a new style of rapping—young, authentic and far from the gangster/ghetto rap from the ’90s. From Berlin, Chefket’s Turkish heritage adds to his youthful, poetic verses. I saw him perform live in the super-cool Mojo Club during this year’s Reeperbahn Festival. Inside an underground bunker whose entrance literally comes out of the ground, the club provided the perfect, circular space for Chefket’s lyrics and a crowd of young Germans pumping their fists to his free-styling lyrics.

Okay, I’ll be the first to admit that it’s this performer’s sexuality (gay) which first attracted my attention. Hip-hop and homosexuality aren’t usually two things that go together, and this 19-year-old gay German rapper has attempted to bridge that gap with lyrics and songs covering topics as varied as gender, politics, sexuality and activism. With mixes of trap, r&b and rap, Juicy Gay puts on an energetic show.

Singer-songwriter Jake Isaac infuses soul music with beats that you’d find it hard not to tap your feet to. His voice captures your attention, but the total package with sweet, soft lyrics, strong beats and soul make Jake Isaac a top performer—probably why his recent EP topped iTunes charts earlier this year.

I hadn’t heard of this band before the Reeperbahn Festival, but my UK friends have been raving about the band for months. The lovable quartet come form Kendal, UK and singer Hayden Thorpe gets crowds moving with his falsetto vocals and clever, artful lyrics. It’s true indie rock with elements of pop and piano arrangements.

Far from an unknown DJ act, Gold Panda (from the UK) has been making waves with their electronic beats. Their most recent hits infuse bits of Japanese minimalism with chill and urban sounds. I actually missed their act during the Reeperbahn Festival but caught them a few weeks later in Berlin at Berghain, where their music was paired with visual snapchat-style photography—flashes of urbanism, bright colors and big beats.

Hamburg-based, this small soul band has that kind of mesmerizing mix of modern vocals, nostalgia and an ability to transport your thoughts. Singer Milo Milone offers a beautiful set of vocals compared to equally powerful female vocalists such as Amy Winehouse. Songs seem to be full of emotion and the lyrics, written by Milone, are both retro and modern at the same time.

Scottish rock trio Biffy Clryro have been making waves with their indie music. Their British indie superstars headlining many of the UK’s best indie festivals, so to find them closing out a Friday night during the Reeperbahn Festival at iconic venue, The Docks, was no surprise. The energy of their live performances has made them iconic rock stars, and the raw & savage sounds from their hit album have defined them as leaders of the progressive indie rock movement.