I knew two things about Hamburg before I visited:

I’ve heard countless stories about Hamburg’s legendary Reeperbahn but without seeing it for myself, it was hard to imagine what it actually is all about. Turns out that it’s a healthy mix of exactly what I was expecting plus a few nice surprises. While several blocks along the Reeperbahn were pretty much as I imagined: drunk revelers from abroad and at home talking loudly, getting in fist-fights and sexualizing just about everything in sight, there were plenty of surrounding streets that were pleasantly surprising. 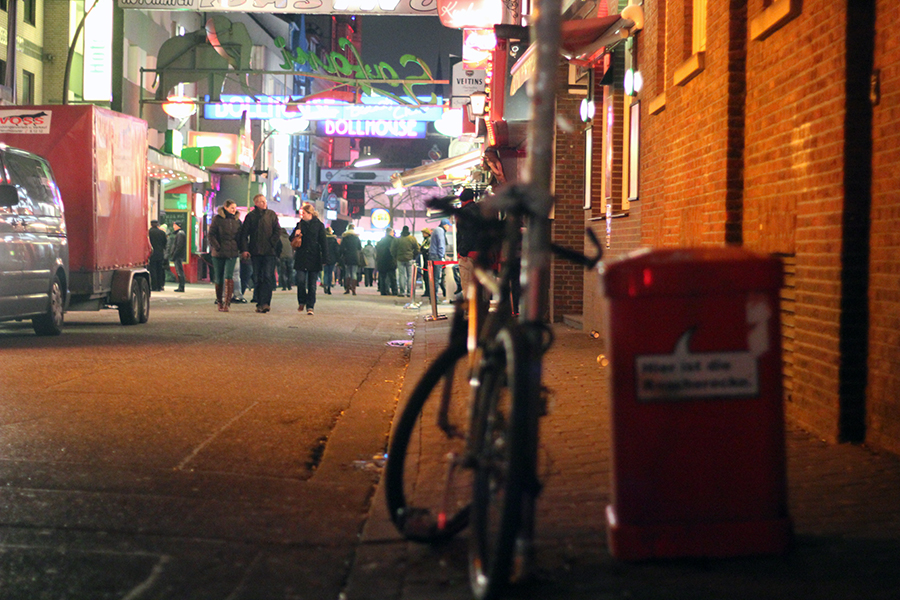 Well, basically it’s a street in the St. Pauli neighborhood of Hamburg. Hamburg has a loooong history and used to be a walled city, and the Reeperbahn was the street just outside one of the gates to the city. It was here where Hamburg’s sailors got to enjoy a bit of companionship. But it was also where the city’s rope-makers worked to produce the many ropes needed for the port city. (Reeperbahn actually translates to “rope walk”.)

Today the Reeperbahn is the heart of Hamburg’s Red Light District. There are a concentrated amount of strip clubs and sex cinemas (sex kinos) plus a healthy spattering of sex shops. Herbertstrasse is probably the Reeperbahn’s most famous street as it’s a one-block road barricated by wooden panels. I didn’t venture down Herbertstrasse myself but apparently it’s similar to Amsterdam’s Red Light District. This is the street that’s famous for not allowing women to walk through. Word on the street (heh) is that if women walked down Herberstrasse, it’d be unsafe because of the prostitutes vying for attention. 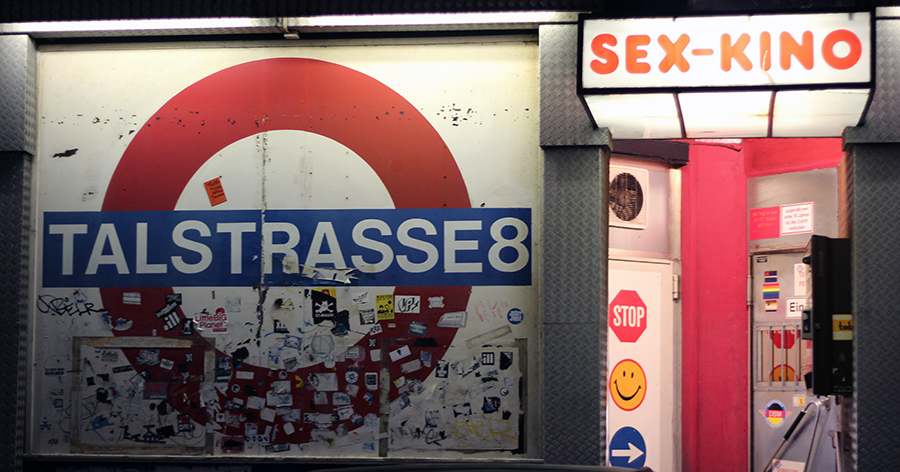 Hamburg’s LGBT scene seems to be scattered between the downtown St. George neighborhood and Talstrasse which runs perpendicular to the Reeperbahn. I only visited St. George during the day; the area is home to Germany’s most famous gay shopping chain store, Bruno’s and a few popular cafes and bars. On Talstrasse, the focus was definitely on SEX…and dancing. And pizza.

Hamburg’s gayborhood for nightlife is unquestionably centered along Talstrasse. From posh clubs like 3 Zimmer Wohnung to sex kinos and sex shops, Talstrasse seems to cover the full gamut. There’s also a late-night pizzeria (Pauli Pizza) to satiate more nutritious cravings. You can read more about the gay nightlife in Hamburg on my other blog.

Grosse Freiheit and a bit of Beatles history

It shouldn’t be much of a surprise that the street that ends (or begins) with Beatles-Platz, is also the one full of music and rock clubs. But like everything else along the Reeperbahn, there’s a healthy dose of sexuality added to the mix—this time in the form of Olivia Jones Bar. Oliva Jones is Germany’s most famous drag queen and her legendary bar & club is right on Grosse Freiheit. It’s across the street from the even more legendary Grosse Freiheit 36—one of Hamburg’s most famous music clubs, with a heavy emphasis on punk & rock.

The street is crowded with party-revelers all year long because even on a cold winter night when I visited, people were drinking out on the street. There’s a second smaller memorial to Hamburg’s influence on rock music on the wall next to Star Club. This music venue hosted legendary music acts from The Beatles to Ray Charles during much of the 1960s.

Where the young and trendy hang out

I think my favorite area along the Reeperbahn’s Red Light District was Hamburger Berg. Running parallel to Talstrasse it’s the street where you find more of the “hipster” bars. Pool tables and kicker (foosball) were in many of the bar windows, with indie music and boys in suspenders. My guess is that these bars are fairly interchangeable — I only went into one called Bambi, but with nearly 20 different bars on less than half a block, this is a street that could keep you going all night long.

Hamburg’s nightlife is fairly notorious among Germans but it was much better than I was expecting. Maybe it’s my middle-class Americana seeping through, but when I hear “Red Light District,” that’s usually not on the top of my travel radar. But in Hamburg, plenty of locals seem to be downright proud of the Reeperbahn’s lascivious (and fun!) atmosphere.

Have you ever partied in Hamburg? What was your impression of the Reeperbahn?