One of the most popular questions (here’s the full list, if you’re curious) I get from followers and friends is about my choice for staying in Berlin long-term. How did I choose Berlin? Why did I want to stay? Why haven’t I returned to the USA?

Considering the fact that Germany had never even been on my bucket list, when I landed in Berlin on a cold summer night in June 2011, I never really expected to stay long myself. And yet, as I’ve retold a hundred million times, that week turned into a month, that month into six more, and then, before I knew it, it was 2014. And now it’s almost 2015. And there’s no end in sight.

I found it hard to commit to Berlin at the time, that first summer. I had this deep, intense love for the city (and more than a few boys I’d met on that first one-week holiday), so it was only natural to stay. But to keep staying? That took some commitment. 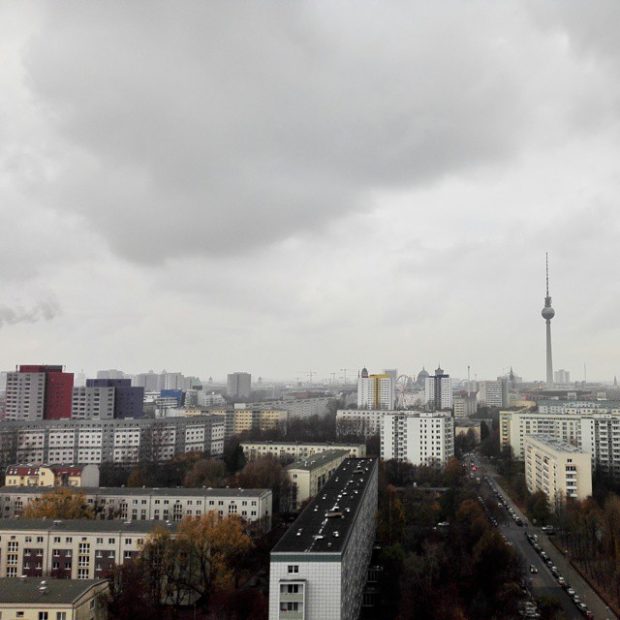 There’s that tower again! Berlin’s skyline might not be the biggest, but it’s certainly iconic and surprisingly beautiful

I didn’t always want to be an expat. In fact, I’m still not so certain about the word. But that’s just semantics.

I had studied abroad two semesters in college – once in London and once in Sydney – so I pretty much had the idea in my mind to live abroad since that point. I just didn’t really expect it to be a possibility. I remember my last semester at Boston University, I was furiously looking into *how* to get a job abroad, but there was so little advice out there. My university’s career counseling was also useless. They just didn’t think it was a possibility to live abroad and had hardly any tips, suggestions or even any recommended resources.

I was lost and just wasn’t at the mental capacity to figure it out on my own (nor with any money to serve as a safety nest if I chose to take the risk on my own). So instead I took the first job offer that came away. Thankfully it was a great job and I loved it. I tried to make it happen with a job transfer after a few solid years of professional work behind me, but as you can imagine in a big corporation, bureaucracy is hard to overcome!

So instead, I ended up taking my savings and spending it to travel around the world and then when I eventually landed in Berlin, with just a bit left of my travel funds, I met several other Americans living here and realized it was possible to actually make it happen all on my own. I gave myself one month to test it out. I sublet an apartment and then did as much networking as I could do until I had a job offer! It was just an internship but it was paid and it was an excuse to stay a bit longer until I could figure it all out more permanently :) It’s now been three years! 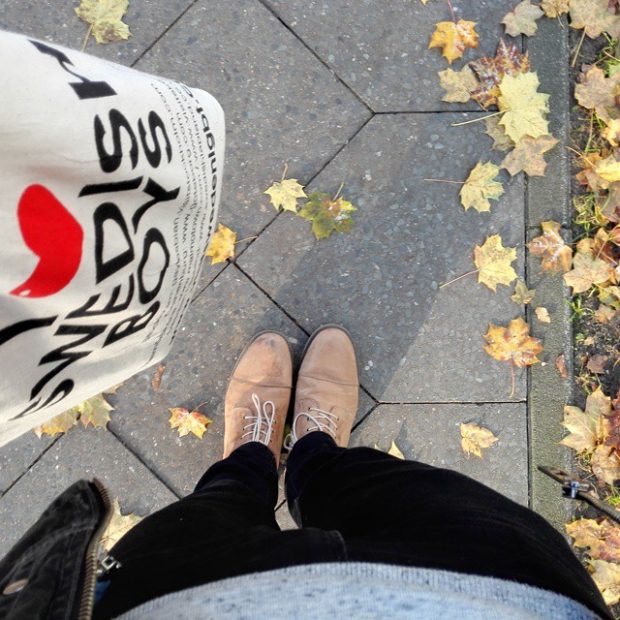 Walking around Berlin on a brisk autumn day

Even after getting that first internship abroad in Berlin, and those months of intense networking, I still found it hard to call Berlin my own. The city can be a tough one to crack. But finally, after three years here, I’m starting to feel that attachment. The pull to the city was always there — it’s how I ended up in Berlin after just a one-week holiday. But there was a constant push-and-pull between myself and the city up until recently. But once I started to remove some of the barriers keeping me from an extra-strong connection (the language, the people, the constant subletting of apartments), the city suddenly seemed to engulf me with a big, warm hug. 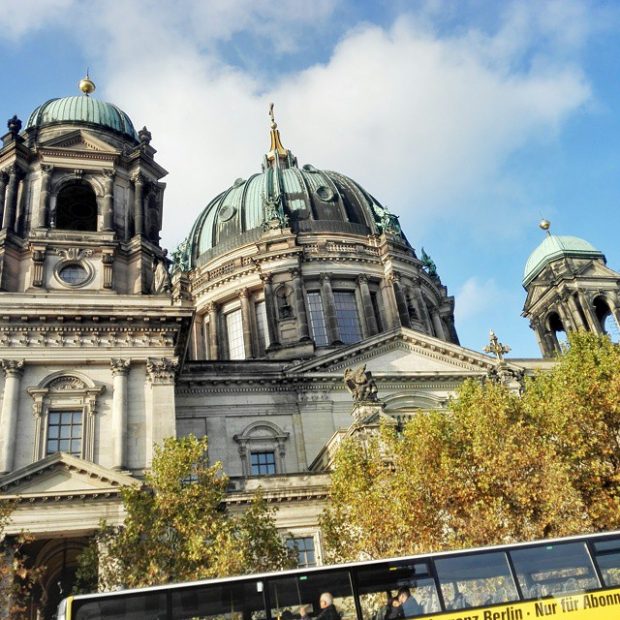 Berlin, Germany – so so pretty, don’t you think? Who wouldn’t want to stay here?!

I think some of the challenges I had in my first few years living in Berlin stem from the fact that I was afraid to call myself an expat, afraid to say that this place, this city, is where I would stay. My trip around the world from 2010-2011 (over 15 months!) had a lot of effects on my life and my philosophy, but one of the more lasting ones was this rather uncommon desire to stay uncommitted. While backpacking I made a point to live freely and spontaneously. And it was fantastic. But I also think that made things difficult upon re-entry into normal living situations. I didn’t notice it then. At the time I decided to move to Berlin, it felt completely natural. Yes, it was surprisingly easy. And yet there were several stumbles along the way and I know now, that had I actually previously planned on moving to Berlin, the integration would’ve been easier.

Sometimes it’s not easy to be an expat, especially when you didn’t plan on it in the first place.

I feel very lucky having been able to successfully integrate myself into Berlin culture, into Germany, into a new life and a new world. But I also feel that for those that wish to move to Berlin, there’s plenty that you can do to plan in advance to make your life as an expat easier.

If you’re planning to move to a foreign country, there’s one thing that I think you should do beforehand: research. Know your new city, know what the government is like, what the laws are like. How do you find that out? Most major expat destinations, countries and cities, have resources available usually written by private individuals and local experts. I suggest Google. But also: Facebook!

For Berlin, I’ve got a useful FAQ guide to some of the best resources for moving to Berlin. 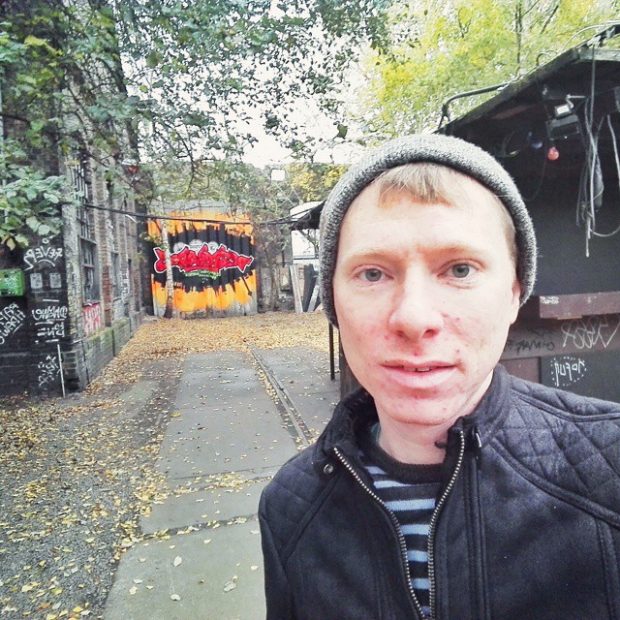 Early-morning selfie after clubbing – still holding myself together though

Facebook is probably one the tool that helped me go from being an “accidental expat” to a full-fledged human being living and enjoying everything Berlin has to offer. I found Facebook groups for just about everything I could need and it’s thanks to Facebook that I found many of my sublets, my current apartment, freelance work and more than a few friends. It’s also how I’ve found out about the countless cool events going on in Berlin.

Being an expat isn’t always easy. But it’s also (usually) a choice. Immigration is a complicated issue and for many people around the world, being an accidental expat is an extreme luxury — one I’m very thankful for. It’s why you see me trying to return the favor, trying to help others achieve their dreams. I know where I come from and I know where I am (and also, hopefully, where I’m going), so to be able to share this hope and this dream of living abroad, I’m very grateful. If you’ve ever been an expat, I think you’d understand how complicated but how wonderful the experience can be.

There are ups and there are downs, but ultimately the experience is one that will leave a lasting impact. I know now, as I sit at my parent’s kitchen in Texas (just on a short holiday – don’t worry! I’m returning to Berlin soon enough), that living abroad in Berlin has changed me in more ways than I can even imagine. I speak differently. I think differently. I act differently. I’ve fallen in love, accidentally, irreparably with a foreign city and a foreign home. But it’s home.

Most locals don’t care for Alexanderplatz, and a lot of tourists like it. I think there’s something really unique and interesting about the concrete mess of the area. Berlin feels like home.