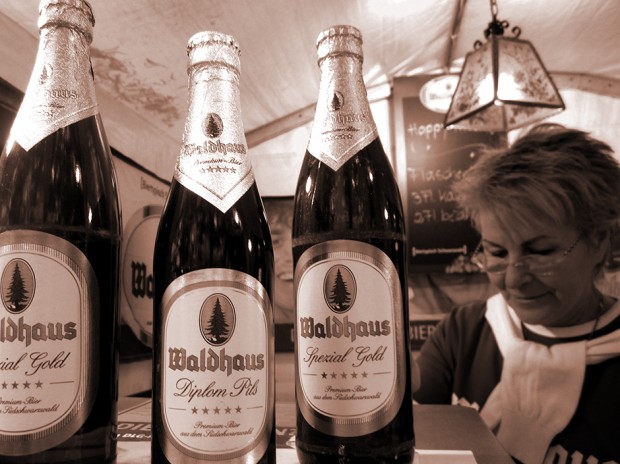 This past weekend was the 17th International Berlin Beer Festival. The 3-day beer festival takes place on Karl-Marx-Allee — a wide avenue that leads from Berlin’s Alexanderplatz through what was formerly East Berlin. With international beer brewers representing over 80 countries and over 2,000 beers, there’s plenty of fun to be had. The festival stretches over 2km on Karl-Marx-Allee so bring your walking shoes! I recommend starting at one of the end points (either Strausberger Platz or Frankfurter Tor) which are both easily accessible by u-bahn or bicycle. Then just start walking.

Stages featuring German folk bands, dancing acts and other ridiculousness are scattered throughout the 2km. Like any other German beer festival you’ll find plenty of people dressed up whether in silly outfits or traditional Bavarian clothing. Think of drindls and lederhosen. But please bear in mind: this isn’t Oktoberfest so don’t expect quite the same level of debauchery.

Affectionately called “Beer Mile” or Biermeile, the festival takes place annually on the first weekend of August. While German and Polish beers seem to be the easiest to find along the Biermeile, there are booths from as far away as Vietnam.