So, this isn’t a story I’ve shared in many places (even though I’m all over the internet). But in all honesty, it’s one of the most defining moments of my round-the-world trip that lasted from May 2010 to July 2011 (and then some).

Like any good adventure story, it’s got a hot Australian dude, a mysterious Italian woman, an ugly American and myself as well as fine wine, pancakes and a gay bar. It starts in Seville, Spain on a hot summer night… 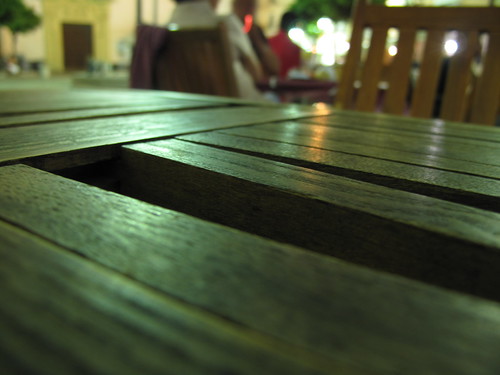 The month was May. It was only my first few weeks from leaving America and starting out on a RTW trip that would eventually lead me to the Middle East, India and Southeast Asia. But what would happen on this one (slightly absurd) night out of drinking, debauchery and deceit would have a lasting impact on the rest of my travels.

It started innocently enough at a popular backpackers’ hostel. After sharing dinner, several of us decided to visit a nearby tapas bar. Over tapas and cheap beer, the 28-year-old Australian architect convinced our small group to keep it up and continue on for the night. Seville’s nightlife is legendary among travelers & expats and many of our small group had yet to sample it.

As these things go, we were convinced to visit a gay bar, where there were potential promises for free drinks from a friendly bartender. Though we didn’t get the free drinks, the six of us enjoyed some pleasant conversation at a back table. That is until the Ugly American, a 30-something chef, got defensive about the difference between pancakes and waffles.

You see, with the language differences (Spanish, Italian, French and English were all represented), there was some confusion about pancake batter. No one really cared about the difference, but this Ugly American wouldn’t back down. In the end, some feelings seemed to be hurt among a few in the group. The Australian dude and myself secretly conspired to find a way to avoid the Ugly American for the rest of the night. (We were the only two who were really committed to a big night out in Seville anyways.)

So after calming some nerves and finishing our first (or was it the second?) round of beer, half the group decided to call it a night. The remaining four: me, the Australian, the Italian and the Ugly American. The Australian and I were glad we were able to convince the Italian girl to come out with us, but we were surprised the Ugly American wanted to join. He hadn’t gotten along with most of us and didn’t catch the less-than-subtle hints the Australian was dropping. (He had no shame.)

The three of us decided to find a way to lose the Ugly American. The thought was that if this was our only chance, our one-time opportunity for a great night out in Seville, why waste it trying to be nice to someone we didn’t actually want to spend time with? Sure, it would have been nice of us, but by being overly nice and exceptionally friendly to someone who didn’t reciprocate, what do we gain? Or what do we lose by trying?

And so we purposely picked a trendy club, hoping with all hope that our Ugly American friend wouldn’t be allowed in with his white tennis sneakers and cargo shorts. Spain has quite a bit of style (ie, the clothing shops in Madrid) and we were fairly confident we’d have to appear somewhat trendy and hip (words that didn’t quite describe the Ugly American) to get in. But as luck would have it, we were wrong. The doorman let our little ragtag group in. So, that brings us inside. It was early—and a depressingly empty club. We were less than excited. Here’s what happened next:

The Australian quickly ordered a drink, downed it in a single shot and then left us for the “bathroom.” The Italian, moments later, went outside for a smoke. It was then just me and the Ugly American. I knew what I had to do.

I downed my drink, mumbled something about the bathroom and then disappeared. I walked straight outside and didn’t turn my back—afraid of what I might see.

Just outside the club, the three of us met—we smiled a sad, strange knowing look. And then we ran.

We ran down the street, around the corner, through an alley, and straight into a tiny pub that we stumbled upon. We ran all the way to the back table in a far corner, laughing hysterically. Oh my god! What have we done?

I’m not exaggerating when I say that we ran. We ran down the crowded Seville street, not looking back. We literally ran into a bar, glancing around and ran straight for the back corner, behind a wall. We were scared and excited.

What did I learn from all this? Travel is what we make of it. When your existence in a place, with certain people, is so fleeting and temporal, there’s no time to waste. No point in wasting it. Make the most with what you’ve got and do what you’ve got to do. And so by running down an alley in Seville, Spain on a hot summer night, I learned that this trip, my travel adventures that were still to come, were going to be all about me.