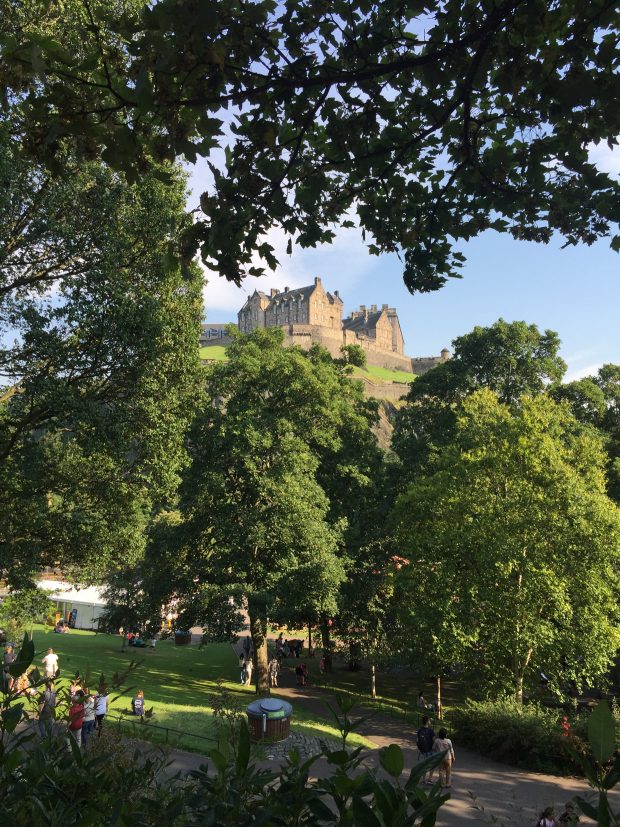 Edinburgh is unquestionably one of Europe’s most beautiful cities–the cobblestone streets, the narrow alleys, the old-town feeling. Edinburgh seems more like a 16th century kingdom than a 21st century metropolis. And yet the city somehow maintains its history in a modern way.

Overlooking the city, the Edinburgh Castle serves as a reminder of Edinburgh’s past, while domineering over the city’s present. In this Scottish city, history is everywhere. And this massive fortress, rich in beauty and in history, stands proud—visible from almost every corner of the city. The iconic landmark, sitting on a rocky cliff, serves as a reminder of Scotland’s history, but also a symbol of the city today.

Historically, Edinburgh Castle has been home to a number of defining events in Scotland’s fascinating history, with people living on the site for thousands of years. The castle has significant importance to Scotland’s war for independence. It’s the most touristed site and attraction in the city. Home to royals and militaries, prisoners of war and witches, the grounds offer an insight into another time.

As the site of Scottish royalty and military prowess, the Edinburgh Castle feels strangely surreal. An important, centuries-old castle in the center of a modern city. Unlike other historical sites around the world, the castle is still used today not just as a museum commemorating its past glory, but as a regular host for modern, contemporary events. History in Scotland doesn’t die; rather, it lives on.

This idea, this acknowledgment of the past and the prescience for the future are never more clear than during the annual Royal Edinburgh Military Tattoo—an annual series of Military tattoos performed by the British Armed Forces and International military bands. The Military Tattoo takes place at the entrance to the Edinburgh Castle every night, rain or shine, throughout the month of August. Something I learned the hard way on my visit because I seemed to show up for the legendary festival on one of the few nights this summer when it rained. And by rain: I mean a very serious rain. 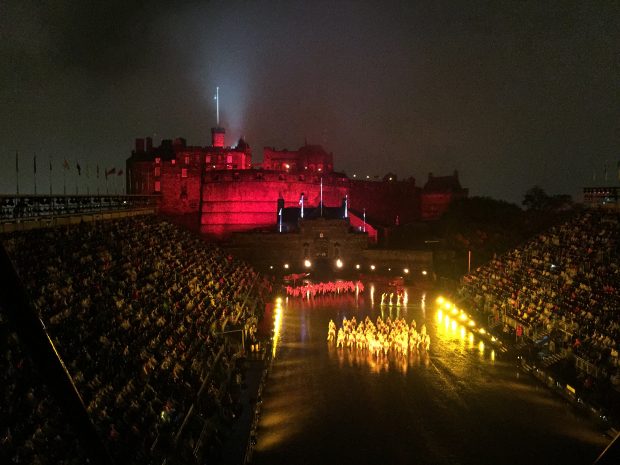 When I was planning my August trip to Edinburgh, the Military Tattoo kept coming up as one of the top suggested things to do. Now, I’m not one to usually enjoy these glorified performances of militaries, but while watching on a rainy Saturday afternoon, it was hard not to feel impressed. Thousands of people showed up, walking uphill to the grandstands (in the rain, no less!). An announcer introduced each of the military groups, ones from all over the world. Projected onto the castle were moving images, flags and other graphics. Lights, fireworks, dancers — it was a spectacular display.

I didn’t fully understand what a “military tattoo” before I visited. I knew it was supposed to be a performance of some kind, but the impressive acts from actual militaries around the world surprised me.

When the American military group came on, I couldn’t help but feel a strange tug of pride. Even more interesting was the fact that the people in the military bands and display teams were performing in the open-air, under a persistent rain. Watching them run across the performance area and to perform with such skill—it humanized the teams.

The entire experience felt like one of those one-of-a-time things. A man sitting near me, a local Scottish artist, had been several times before that same year. He was sketching the entire night and you could tell that the night’s performance was unique. Even while these military bands perform with exact precision, with the announcer’s rumbles overhead, there was a specialness to the night. When the fireworks finally went off, you could just feel that this was a special place. Up on the top of Castle Rock. Where armies have fallen, royals crowned, where people have lived and died. The Royal Military Tattoo was a reminder of all that, but also of what we are today: strong and vibrant, international and, though precision, still with a lot of character. 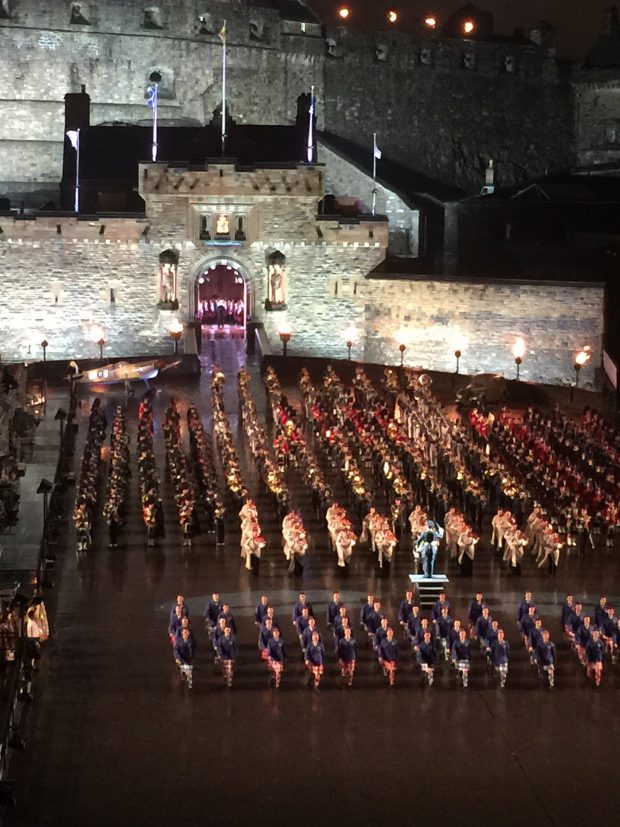 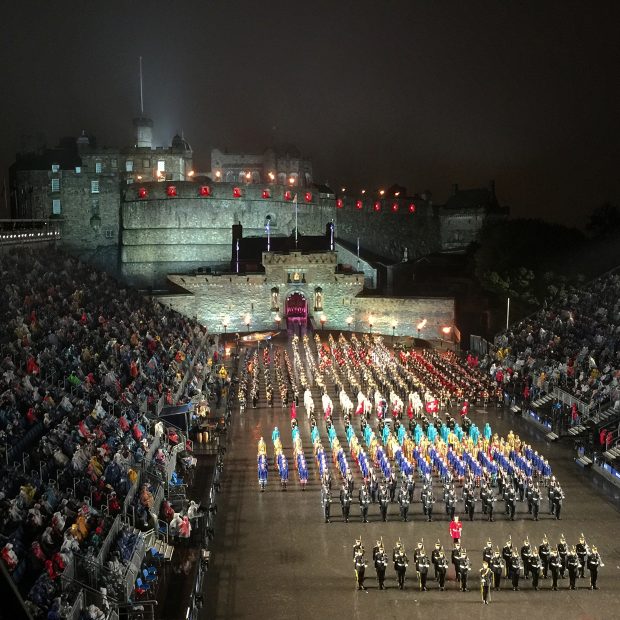 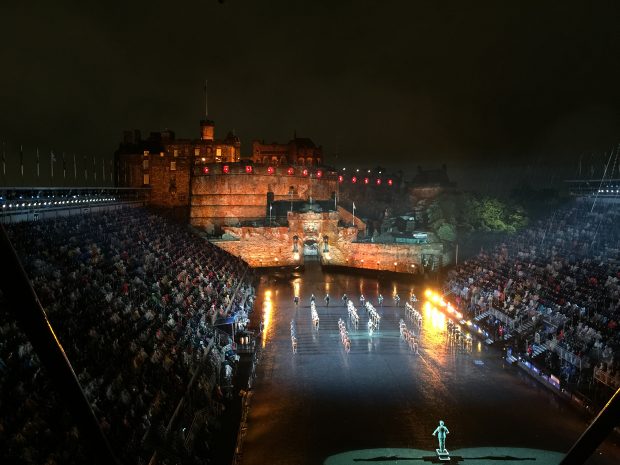 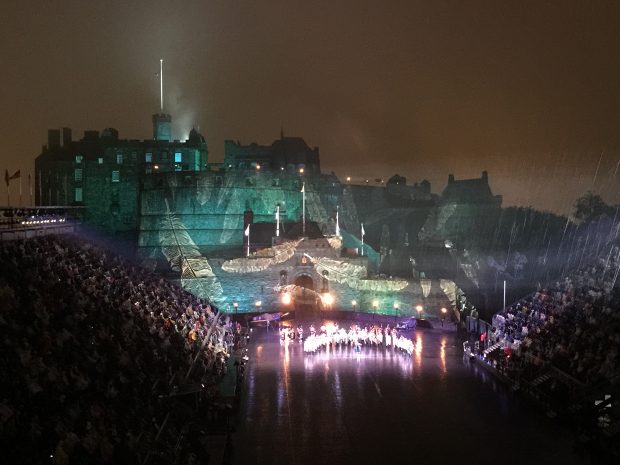 Learn more about the Tattoo on their official website, www.edintattoo.co.uk, or book tickets for the event (and other Edinburgh festivals) at www.edinburghfestivalcity.com