Travel blogs, photos and stories from one of Europe’s most vibrant and culturally exciting cities—Manchester 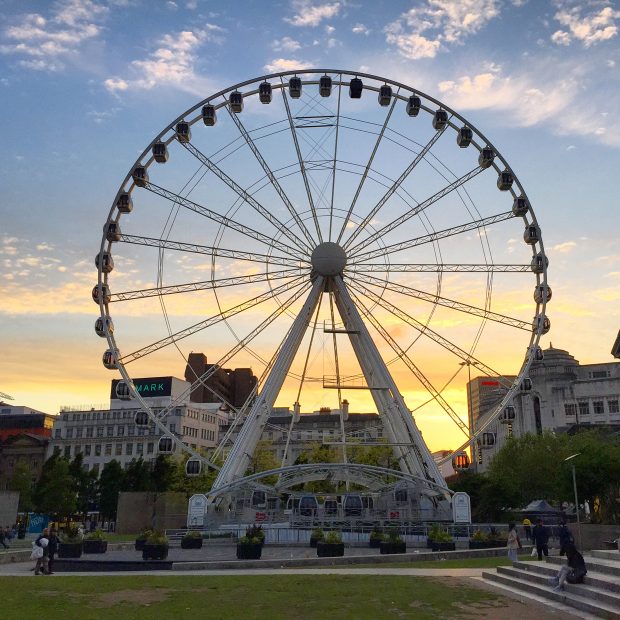 One of the most vibrant and culturally exciting cities in England, Manchester was once an industrial powerhouse and has now defined itself as an arts, cultural and music hub—with countless activities and festivals for every type of traveler. Start here with my basic Manchester travel tips, or jump down below to read my latest Manchester travel blogs.

The weather in Manchester is pretty mild all year round, with no much extreme. Nonetheless, summers are no doubt the nicest time of year to visit, but it may still rain at any time, so come prepared! It’s a big enough city that even if you visit in the dead of winter, there’ll still be enough cool stuff to do indoors — basically, visit Manchester anytime!

The city plays host to many festivals throughout the year, which can be worthwhile visiting for. For example, there is a Beer and Cider festival in late January, there are big Chinese New Year celebrations at the end of January or early February, the Parklife Festival, an outdoor music festival, every June, the Manchester Science Festival in October and the Doki Doki Japanese festival every November, among others.

Visit the Whitworth Gallery – Awarded the prestigious Museum of the Year award in 2015, this art museum has around 55,000 items in its collection including fine art, modern art (including works from the greats Van Gogh and Picasso), a textile collection, wallpapers, prints and sculptures. Great paired with a visit to adjacent Whitworth Park on a warm day, which has some sculpture scattered throughout.

Check out the Lowry – Probably the most popular tourist attraction in all of Manchester, the Lowry is a stunning architectural marvel with its glass and metallic surfaces and is set in a waterfront location in Salford Quay. A home for the performing arts, the venue has two theatres and studio space, and regularly holds different art exhibitions.

Explore the Northern Quarter – Once a run-down area of industrialized warehouses and ragtag squats, it’s now home to trendy shops, pretentious cafés and underground basement clubs. Many Northern Quarter bars and clubs double up as restaurants, cafés or even art galleries during day, turning into shabby-chic nightlife spots each night.

Although it’s a relatively small city, taking a tour around Manchester will save you time and get you in to some areas of the city you might otherwise overlook, so it’s definitely worth you time to consider one.

Ever since being immortalized by the UK TV series, Queer as Folk, Manchester’s Gay Village has helped to define the city as one of the world’s modern gay city hotspots. Centered around Canal Street, the Gay Village attracts thousands of visitors every weekend.

The city also has some important ties to LGBT history. These are a few of the best things you should know about visiting gay Manchester.

Sackville Gardens – There are three important memorials inside this garden, close to Canal Street, relevant to LGBT history that are worth visiting: the Alan Turing memorial, which is a statue of him sitting on a bench holding an apple, the biblical sign for forbidden fruit; the Transgender Remembrance Memorial, which is a 12 foot high sculpture carved from a piece of a sycamore tree decorated with butterflies; and the Beacon of Hope, a steel column sculpture that is dedicated to those who have suffered from AIDS.

Richmond Tea Rooms – Just upstairs from the Eagle, a men’s only bar, is a quirky cafe that takes its design inspiration from Tim Burton and Thomas Ott’s version of Alice in Wonderland. Here you can treat yourself to a proper afternoon tea experience or sip a drink in their cocktail lounge.

G-A-Y – A popular gay night club with cheap drinks and fun events like “Spanked Tuesdays” when all drinks are only £1.50. It’s young and fun, with the same type of crowds you can expect from London’s G-A-Y.

Manchester has plenty of cool and quirky hotels, as well as all the big chains you’d expect. They’ll likely get full when there’s a conference or special event in town, so definitely consider booking in advance. I’ve found that using Booking.com, Agoda.com or Hotels Combined can be really useful for finding last-minute deals.

Manchester’s hip attitude and creative spirit makes it one of the U.K.’s most vibrant, colorful and queer cities — read about my queer weekend exploring Manchester’s underground nightlife

Read More about A Night Out in Queer Manchester

The Coolest Things To Do in Manchester

From the city’s most posh but unpretentious hotel, to the tasty treats at a Northern Quarter restaurant, these are the coolest things to do in Manchester <3

Read More about The Coolest Things To Do in Manchester