Travel blogs, photos and stories from Greece — one of Europe’s most historically important destinations 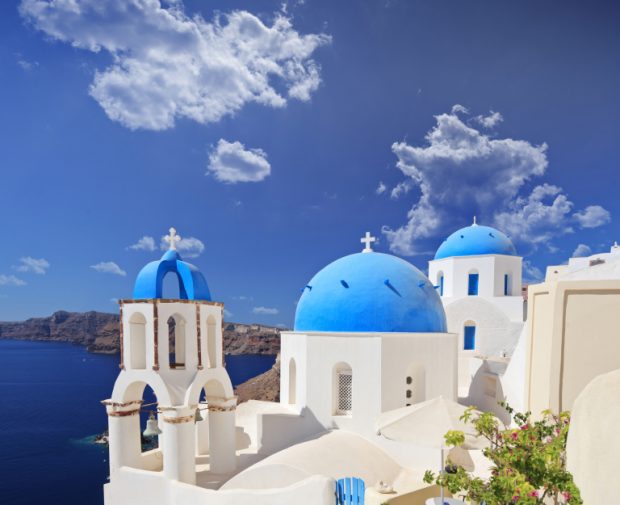 As one of Europe‘s most historically important destinations, Greece has its fair share of ruins and historical monuments. But there’s much more to Greece than just history! Start here with my basic Greece travel tips, or jump down below to read my latest Greece travel blogs.

Probably the best time to visit most parts of Greece weather-wise is in spring, early summer or fall when temperatures are high enough to enjoy the beaches but not unbearable and also during the time before and after the hoards of tourists visit in the summer. Visiting Greece at this time, you’ll avoid higher prices and more easily find space at the beach!

Keep in mind that a lot of things (monuments, museums, shops, restaurants) close over Easter, so visiting around this holiday might not be the best idea. If you’re planning to visit one of the mainland cities, more or less any time of year is a good time to go to Greece, as there will always be cool things going on in Athens and Thessaloniki.

Meteora – Known for its remarkable landscape and otherworldly rock formations, this is the site of a complex of Eastern Orthodox monasteries near the town of Kalabaka on the mainland. You could visit here as a day trip from Athens of Thessaloniki, but an overnight stay will give you a better impression of this unique place.

Thessaloniki – Greece’s second city in the north of the country is a surprisingly hip place. Like Athens, it’s a port city, but smaller and there are beaches right in the town. It hosts an annual international film festival, has a vibrant nightlife and plenty of cool bars, clubs and live music venues.

Because so much of Greece is seemingly made for tourists, there’s something for everyone on each of the islands and the mainland, too. Traveling with kids? Mykonos with kids is an option!

Taking a tour while in Greece is a great idea, especially if you’re a history buff and want to get the lowdown from someone who really knows their stuff! Also, if you’re just looking for the coolest places to hang out and don’t want to miss out on the latest spots, it’s a great idea too!

Definitely one of the most liberal countries in southeast Europe, Greece has made massive strides in LGBT equality over the last few decades, and as such traveling there as a gay person is relatively easy. These are a few of the best things you should know about visiting gay Greece.

Mykonos – Probably the gayest island in the Mediterranean, Mykonos has a reputation as a haven for gays worldwide. With countless gay hotels, bars, clubs, beaches, shops and businesses, don’t miss it if you want to be surrounded by men who like men.

Pride Events – Athens, Thessaloniki, Crete and Patras all have their own annual pride events, with Athens being the longest running since 2005. The others are all quite new and still growing.

With Greece’s recent recognition of LGBT rights, the Outview Film Festival visits Berlin in 2016 for a celebration of Greek gay films

With 32k participants, the 2015 Athens Pride festival for LGBT equality was the biggest one yet. Plus the theme “take a stand” was celebratory and political all at once.

Read More about Taking a Stand at Athens Pride 2015 (PHOTOS)