This past December, the Greek Parliament finally legalized civil unions for same-sex couples. These households are now eligible for a lot of–but not all–legal standards and protections already available to married opposite-sex couples. Although, admittedly, these steps toward some initial form of equality have been long overdue, this is a big step for a country that’s known for its (Greek) orthodox tradition and the widespread influence the church undeniably still enjoys in the realm of the Mediterranean country.

Greece was one of the last EU states to recognize same-sex unions and yet it has a long history with homosexuality. If you’ve ever looked closely at the ancient Greek pottery (black and red amphorae) often found in museums around the world, you’ll frequently find representations of homosexuality. In ancient Greek culture, sexuality wasn’t perceived as something defined by gender roles, but rather by sexual roles, so for a long time, homosexuality was often just a part of the culture—nothing out-of-the-ordinary. Then there were Greek gods like Sappho, the unofficial patron saint of lesbians, and the tales of Alexander the Great and his affairs with both men and women.

So when Greece legalized civil unions in 2015, there was an excitement and jubilation by the local community. I saw a bit of that when I visited during Athens’ gay pride last summer. As part of Greece’s celebration for equality, the annual Athens’ International LGBTQI film festival, Outview, is coming to Berlin. It’s part of the annual Greek film festival, Hellas Filmbox Berlin, taking place at the Babylon cinema in Berlin Mitte.

Outview has been conquering the Greek capital since 2007, promoting and celebrating the best Greek and international queer films, not only with screenings, but also with masterclasses and events taking place every spring with the participation of selected international guests and queer voices. In April, Outview will be celebrating its 10th edition, still under Katsikadakou’s curation, which relays on her background in photography, graphic and web design, and her unique perspectives on lesbian representation and queer themes. Her influence goes back to the early 1990s struggles for lesbian visibility, mostly through a series of cultural events known as “Cybedykes”. Katsikadakou is considered one of the first lesbian activists of the Greek scene, with her non-stop political and artistic activism since 1986. She is the head behind the website lesbian.gr, and the organizer of the first Gay and Lesbian pornographic art festival in Athens. Next week, Outview joins Berlin’s film scene to gives us an advance of the celebration, with three highly praised short films, introduced by the creator and director of the Festival, Maria Katsikadakou:

Here’s what they’re going to be showing…

A Box Made of Wood (Panayotis Kountouras)

In this short 20-minute film, Konstantinos lives his life freely in a body of his own choice while Vassilis returns to his parents’ home to make a new start. A wooden box safeguards the past of the two brothers torn apart by their mother. However, the sudden news of an accident tips the scales. The box has been opened. Vassilis stands up to his mother’s obsessions. He wants to get to know his brother for a second time.

The winner of Athens’ Outview Film Festival in 2015, Fuck Freud tells the story of a gay couple and a woman who gets involved in their lives, with all the feelings of mounting jealousy and hidden emotions.

The documentary Nana is the portrait of a seventy-year-old trans woman who lives in Thessaloniki. The combination of narrative, observation and archival footage creates an image of her past, as well as the challening everyday life a trans person faces in Greek reality. 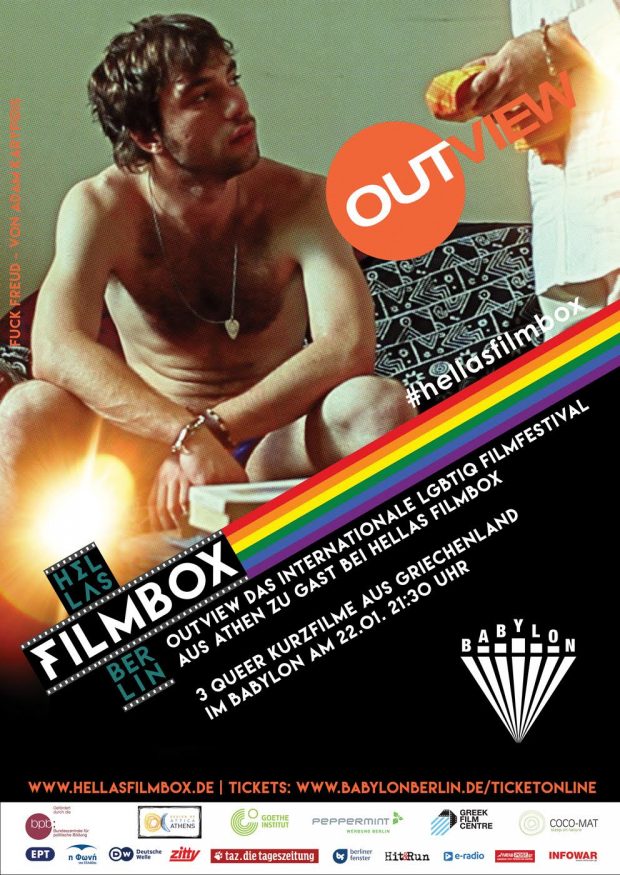 Hellas Filmbox Berlin is the first Greek film festival in Berlin, established in 2015. It highlights the remarkably artistic Greek film scene of recent years and presents it to a wider (and mainly German) audience, focusing this way on showing a different image of Greece than the German media has done in the past eight years. The films presented by Outview will contain English subtitles, though.

The Hellas Filmbox festival is essentially a platform for “New Greek Cinema,” not only providing insight into Greece’s current situation, the crisis, its people, inner conflicts and secrets, but also showing some films of the widely known “weird wave” of Greek cinema. Remember Dogtooth (Lanthimos) and Attenberg (Tsangari)? Both directors aren’t known for their mainstream blockbusters, but rather for their idiosyncratic, alternative and eye-opening films. Anne Thompson and her team just voted the latest films of both Greek directors (Chevalier, Tsangari and Lobster, Lanthimos) into the top 20 of the most anticipated films in 2016 on Indiewire’s TOH! blog. For a country like Greece this is a huge deal and pushes Greek cinema into the spotlight.

Rachael Tsangari’s film Chevalier is not only one of the highlights of the Hellas Filmbox Berlin festival, but will be having its Berlin premiere during the closing ceremony on the 24th.