The Greek capital is more than just ruins and history…though it certainly has  a lot of that too! It’s also a really cool city with lots of hip hangouts, fun art to see and great food. Start here with my basic Athens travel tips, or jump down below to read my latest Athens travel blogs.

Probably the best time to visit Athens weather-wise is in spring, early summer or fall when temperatures are high enough to enjoy being outside but not unbearable and also during the time before and after the hoards of tourists visit in the summer.

Note that Easter week is one of the most important holidays in Greece, and many people leave Athens to head to the islands at this time, so it could be a good time to grab a deal on a hotel in the city, but bare in mind that a lot of things will likely be closed at this time.

Acropolis – Probably the most recongizable landmark in Athens, the Acropolis sits atop the city’s highest hill looking down over everything else. So climbing up there will not only give you an idea of what this place was like in antiquity but also great views of the city.

Forum of Athens – This former gathering place, also known as the Agora, is spread out over a large space and gives you a feel for what the layout of Ancient Athens would have been like.

Temple of Olympian Zeus – Dedicated to the head of the Olympian gods, this impressive temple is a fun place to explore.

More Things To Do in Athens

Try the local food — Greek cuisine is one of the world’s best, and Athens is at the heart of a new culinary explosion. Neighborhoods like Exarchia are where you’ll find a lot of top-quality, low-budget restaurants. With the influx of so many tourists to Athens, many of Athens’ best restaurants are easy to find. Check out the Foodie Flashpacker for some local restaurant recommendations.

Explore the street art – Because of the many social movements that have started in Greece, the city of Athens is a hotbed for political discourse. That, in turn, has led to an explosion of graffiti and street art you’ll find all across the city (though especially in the Exarchia neighborhood).

Athens is a bit city, and there’s a lot to see, so consider taking a tour to get you in to some areas of the city you might otherwise overlook. Take a look at this selection of Athens tours.

Athens is a relatively friendly place for LGBT travelers, especially compared to other parts of south eastern Europe. The main gayborhood in Athens is called Gazi, close to downtown, but many establishments will not overtly mark themselves, with say, a rainbow flag, so it might not seem obvious at first. These are a few of the best things you should know about visiting gay Athens.

Sodade2 – The city’s most famous gay club, Sodade2 is spread over two floors and features mainstream as well as more up and coming DJs. Guarantees a good night out!

Alexander Sauna – This pleasant, clean and well designed sauna is large and very popular with locals. Set out over four floors, it has all the facilities you’d expect and friendly staff.

Athens Pride – During the city’s pride, most things pick up in the late afternoon with local organizations setting up stands promoting their diverse causes. There’s also a stage with live performers and speeches —including the official commencement of the parade from the mayor of Athens and things don’t shut down until almost 3 a.m.

Athens has plenty of cool and quirky hotels, as well as all the big chains you’d expect. They’ll likely get full when there’s a conference or special event in town, so definitely consider booking in advance. I’ve found that using Booking.com, Agoda.com or Hotels Combined can be really useful for finding last-minute deals. 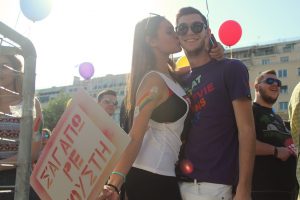 With 32k participants, the 2015 Athens Pride festival for LGBT equality was the biggest one yet. Plus the theme “take a stand” was celebratory and political all at once.