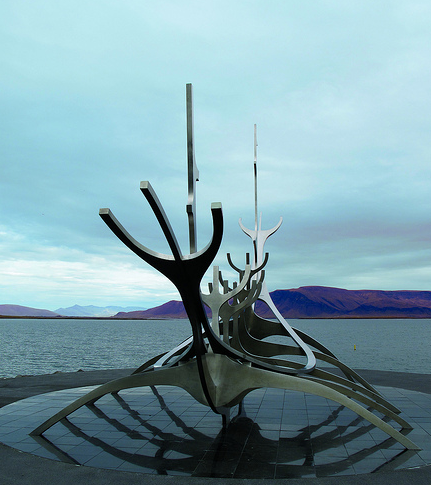 The capital of the Land of Ice and Fire isn’t necessarily the biggest, most cosmopolitan city you’ll visit, but it has a charm of its own. As the starting point for pretty much any trip to Iceland, it has some cool stuff to offer, you just need to know where to look! Start here with my basic Reykjavík travel tips, or jump down below to read my latest Reykjavík travel blogs.

Reykjavík’s weather is never predictable so come prepared! The city actually never gets that cold due to its proximity to the sea, but for the same reason, it can be extremely windy.

Coming in the summer, you’ll get barely any darkness at night due to its latitude, and conversely in the winter, the sun may only be up for 3 to 5 hours a day. If it’s a view of the Aurora Borealis, or Northern Lights, you’re after, September to January is the time to visit, though you’ll have to keep your fingers crossed for a clear sky.

Besides that, there are several annual events worth coinciding your visit to Reykjavík with. In late May, the Reykjavík Art Festival takes place, highlighting new performances, exhibitions and installations all over the city. In mid August, the Culture Night is a free, city-wide event of cultural programs from museums, theaters and other cultural institutions that ends each day with fireworks over the harbor.

In late October or early November every year, Iceland Airwaves is one of the world’s premier showcases for new music and features new and upcoming talent from Iceland and all over the world as well as established performers.

Check out the Icelandic Phallological Museum – Probably the only museum in the world displaying penises from mammals of all kinds and some weird and wacky facts about phalluses that you didn’t know you needed to know! This is one of Reykjavík’s oddest sights, and it shouldn’t be missed.

Climb the Hallgrímskirkja – For great views over the colorful rooftops of Reykjavík’s buildings as well as the mountains in the distance, head up to the top of the tallest building in town. This modern Lutheran church is also a pretty impressive feat of architecture in its own right and is an immediately recognisable symbol for the city.

Attend a music festival – Iceland is known for its contributions to the world of music, and what better way to experience this first hand than at an Icelandic music festival?

Although it’s a relatively small city, taking a tour around Reykjavík will save you time and get you in to some areas of the city you might otherwise overlook, so it’s definitely worth you time to consider one.

With almost a third of the entire population of Iceland living in Reykjavík, it’s no surprise that it’s the center of gay life for the country. These are a few of the best things you should know about visiting gay Reykjavík.

Reykavík Pride – The only pride parade in Iceland, which attracts almost a third of the country’s population each year, takes place every August and is a highlight of the city’s gay calendar. Not only is there a city-wide parade lead by the mayor (who often turns up in drag!) but many events, film screenings, workshops and seminars leading up to it.

Kiki – Reykjavík’s gayest club is rainbow themed (read: hard to miss!) and guarantees a fun and friendly night out dancing with good music.

Samtökin 78 – This LGBTQ center in downtown Reykjavík organizes demonstrations, vigils and other activist gatherings and is very much open to foreigners.

Reykjavík has plenty of cool and quirky hotels, as well as all the big chains you’d expect. They’ll likely get full when there’s a conference or special event in town, so definitely consider booking in advance.

Þingvellir (Thingvellir) National Park in Iceland When I visited Iceland in September 2009 (read how my trip to Iceland changed my life here) I did one of the popular day trips to all the tourist sites within a short bus ride away from downtown Reykjavik. I was reminded of the Golden Circle tour when I …

I’d like to write a post about how Iceland has changed my life (mentioned first here), but you’ll just have to wait until I find the right words. In the meantime, enjoy the beauty that is Iceland—in photos. Even if you’re hating on it now because of a little volcano named Eyjafjallajökull, there’s no doubt …

Read More about Iceland in Photos

My Travel Experience with Music in Iceland

In my Top 3 Travel Post a few weeks ago I mentioned that I listen to a lot of music. A big part of my travels usually involves listening to local music or at the very least paying attention to what others are listening to. When I studied in London I spent most of my …

Read More about My Travel Experience with Music in Iceland