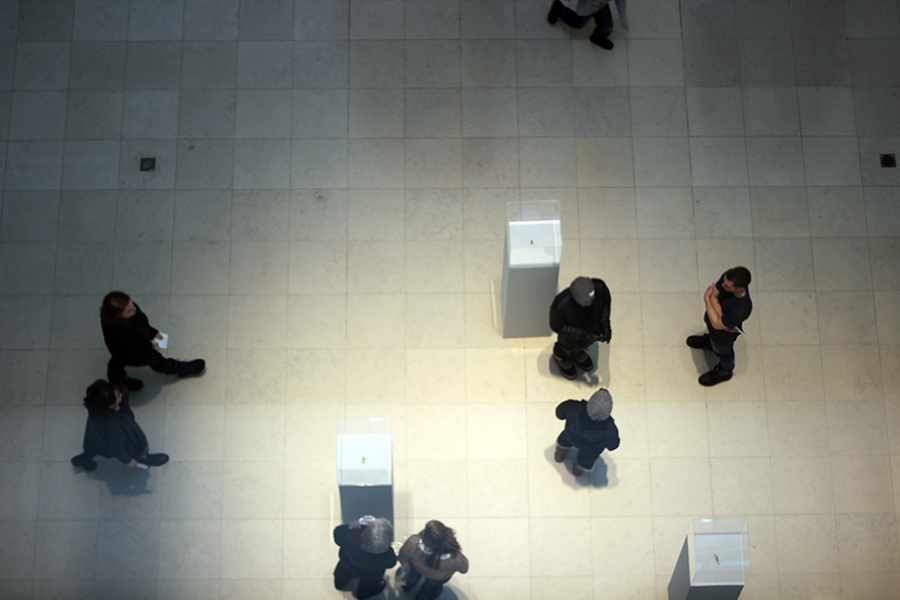 When  in Hamburg recently I saw a flyer for the Hamburger Kunsthalle‘s newest exhibit: Giacometti: The Playing Fields. Growing up, Giacometti’s sculptures were always an interest of mine so the museum exhibit was what drew me in. But it was actually what I discovered in the other parts of the museum that kept me in awe.

The Hamburger Kunsthalle is BIG—one of the largest in Germany, actually. The museum has entire wings dedicated to the Old Masters, to 19th century art and a cube (yes, a cube) filled with four floors of modern & contemporary art (Galerie der Gegenwart). The museum has several notable artists in its permanent collection—some of my favorite artists such as Caspar David Friedrich, Canaletto and Max Beckmann among many others. But it was while wandering the labyrinthine galleries in The Cube that I stumbled on one work that stopped me in my tracks. A piece by Sophie Calle and Paul Auster called the “Gotham Handbook.”

The piece is featured across several large framed displays of photos, text and notepaper which was part of the public exhibition. Essentially, the Gotham Handbook came about when Sophie Calle asked Paul Auster for a project. He gave her instructions to:

Calle was essentially directed to become an active participant in parts of daily life that we usually avoid. The story of the 7-day project is told through Calle’s diary and photographs. To “cultivate” a spot, Calle painted a phone booth in Manhattan and chained a folding chair to the booth. She also would replenish the booth every day with fresh flowers, cigarettes and snacks. For the other part of the project, she detailed the conversations and experiences she had with strangers and those that she offered sandwiches & cigarettes to each day.

I found the piece to be both inspirational and interesting—which is hard to do for many performance pieces later translated into a book or wall display. By the last few days of Calle’s social experiment, people were leaving encouraging notes and thank you’s tacked up to the phone booth (mixed in with some less-than-kind words). As someone who regularly promotes the idea of talking to strangers I won’t lie that this work was particularly moving. Plus I’m a big fan of believing in the genuine kindness of the vast majority of people.

If you’re looking for some inspiration in Hamburg, besides visiting the indie galleries & local shops, I definitely recommend the Hamburger Kunsthalle. It’s quickly climbed to the top of my favorite museums in Germany. Not only because of the “Gotham Handbook” but the wide range of European masters and open gallery spaces that make for a great, inspirational afternoon inside.