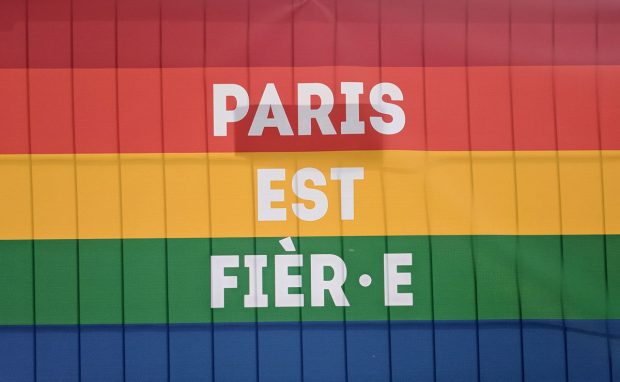 SPONSORED — This summer, the 10th annual Gay Games took place in Paris. Over 10,000 athletes from 70 countries competed in the event and thousands more of other paricipants swarmed the city. With 10 days of events, Paris (already the city of love) proved itself as a capital of LGBTQ culture. Sporting events, cultural activities, parties and festivals took place across the city during the games, with thousands of spectators and volunteers participating.

I had the chance to visit on a trip with Atout France and Visit Paris Region, and participate in some of the Gay Games events (and parties!). A weekend of love, diversity, croissants, and athletes—Paris never seemed so gay!

The Gay Games is a worldwide sporting and cultural event which actively promotes acceptance of sexual and gender diversity. With tens of thousands of LGBTQ+ athletes participating in the quadrennial event, it’s one of the world’s largest sporting events.

The first games were held in 1982 in San Francisco, and its American roots have always meant the Gay Games have had large American delegations (including a vast amount from San Francisco specifically), but still over 70 countries participated in the 10th annual games. 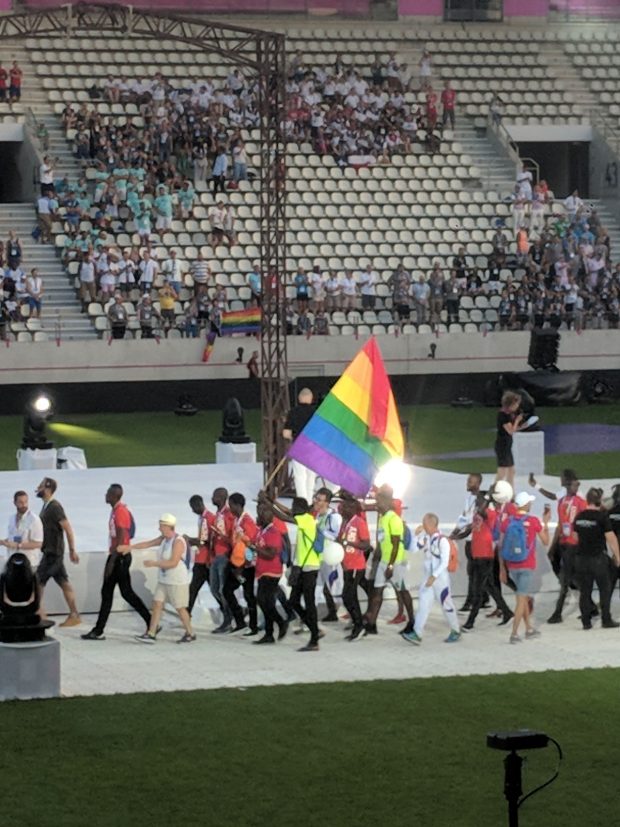 The 2018 Paris Gay Games (official website) were only the 3rd time they took place in Europe (having previously been in Amsterdam and Cologne). The 11th annual Gay Games will take place in 2022 in Hong Kong. 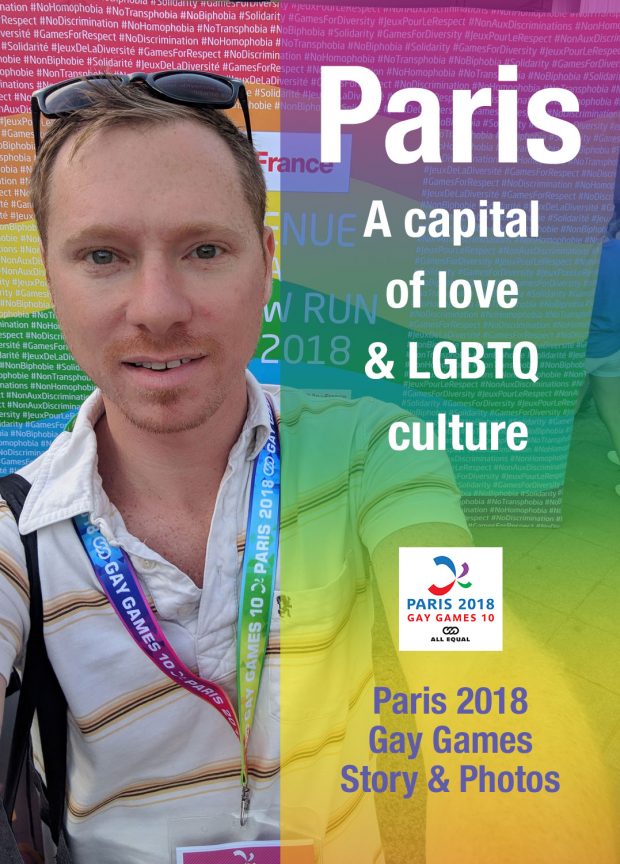 Highlights from the Paris Gay Games 2018

The 10 days of events and activities in Paris during the 2018 Gay Games were a celebration of love and diversity. Over 15,000 athletes, spectators, volunteers, and other participants brought a message of love and equality to the city of light. 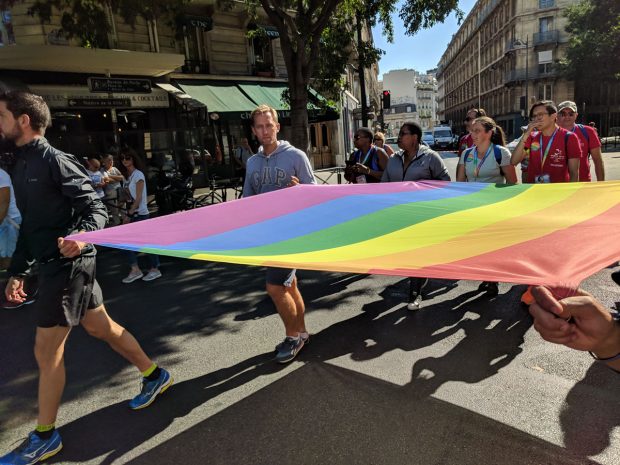 Since 1990, every Gay Games has included a memorial run to start off the week+ of events. The friendly and social morning event pays tribute to the memories of artist Keith Haring, lesbian activist Rikki Streicher, Dr. Tom Waddell, the founder of the Gay Games, and to all family members whom the Gay Games have lost, especially due to AIDS and breast cancer.

It’s often one of the largest events of the Gay Games and this year, the International Rainbow Memorial Run started in front of the Paris City Hall at Hôtel de Ville and went along the River Seine. 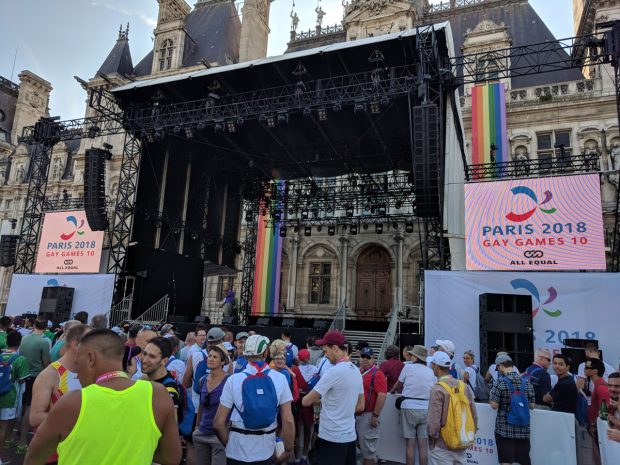 The event started with speeches from the Paris Mayor Anne Hidalgo—a longtime supporter of LGBTQ rights in Paris—and other local politicians and international visitors. A memorial quilt was displayed on the Hôtel de Ville plaza with guests invited to add names of lost loved ones. It was a moving event and an important way to remember the past while celebrating the future—the perfect way to start the Gay Games.

The biggest event of the Gay Games is the opening ceremony, which took place at the Jean Bouin Stadium, an impressive venue that filled up with 15,000 athletes and spectators. The march of nations into the stadium was a fun way to experience the diversity of the event.

With people visiting Paris for the Gay Games from over 70 countries, it was an ebullient event—crowds in the audience cheering and photographing whenever their country or city delegations entered the stadium. By the end of the march of nations, during which presenters interviewed select athletes, the stadium was buzzing with energy and the sun was setting. 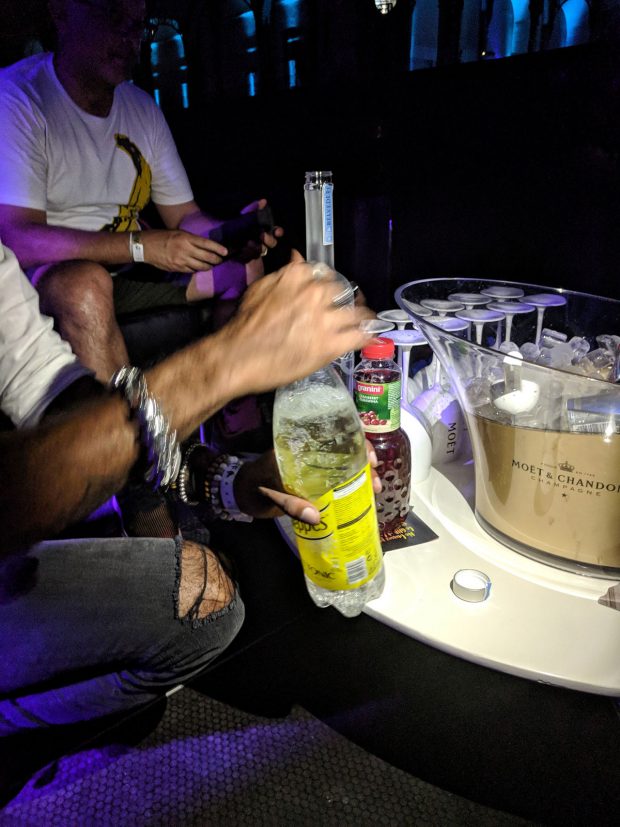 Following the Opening Ceremony, a gala took place at the beautiful Grand Palais, one of the most prestigious Parisian monuments. While it was a paid ticketed event, the Grand Palais didn’t take long to fill up with the international crowds visiting Paris during the Gay Games.

DJs played all night and with food and drinks available, it was a fun way to let loose before the games officially got started the next morning. While the Gay Games are about sport, it’s also an important event for celebrating LGBTQ culture, and the opening gala was a fun party opportunity to meet other participants.

Hanging out at the Marais 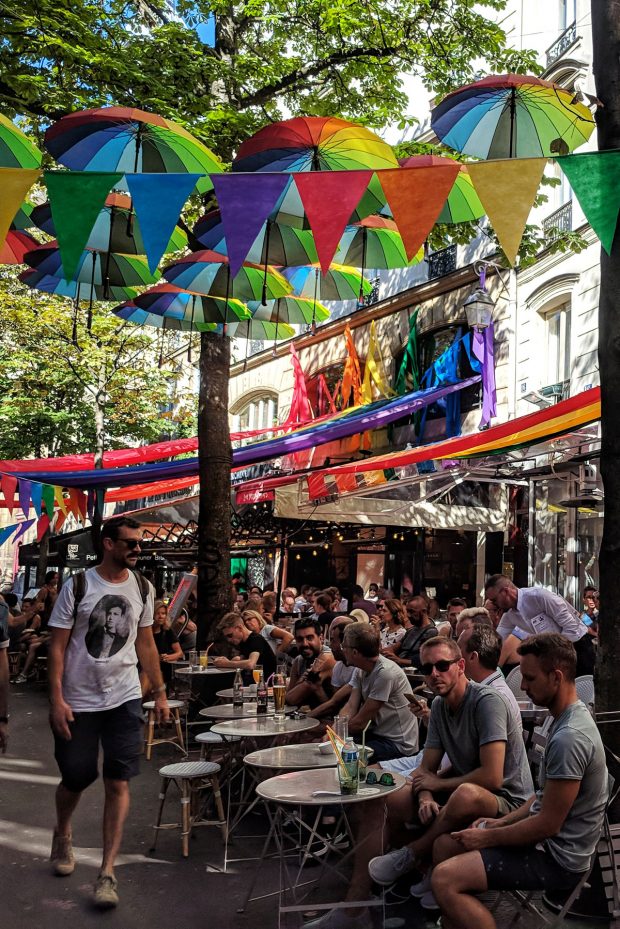 The central Parisian neighborhood, the Marais, is the city’s unofficial gay neighborhood and it’s where many of the after-hour parties and celebrations took place following award ceremonies and sporting events during the Gay Games.

For the weeks leading up to the games, and of course during the games, the Marais was a bustling meeting spot for everyone in the LGBTQ community. The LGBTQ community center showcased a queer photo exhibition and offered support and free travel guides for locals and visitors alike, and the bars and clubs hosted daily events and specials.

While the Marais is always super gay and super fun, during the Gay Games (with an extra 15,000 people in town!), it was especially hopping! Rainbow crosswalks, chalk drawings, and pride flags filled the streets. 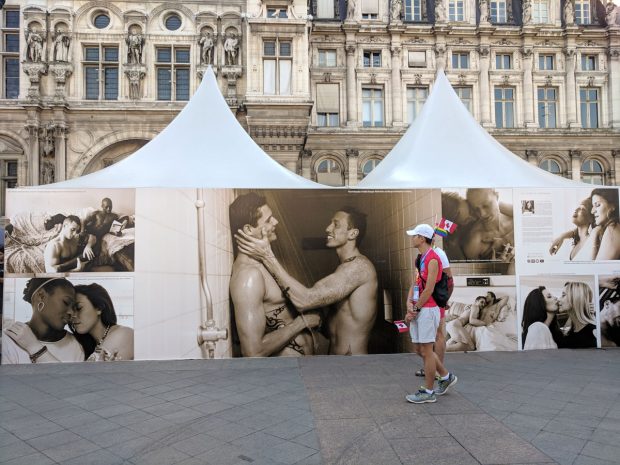 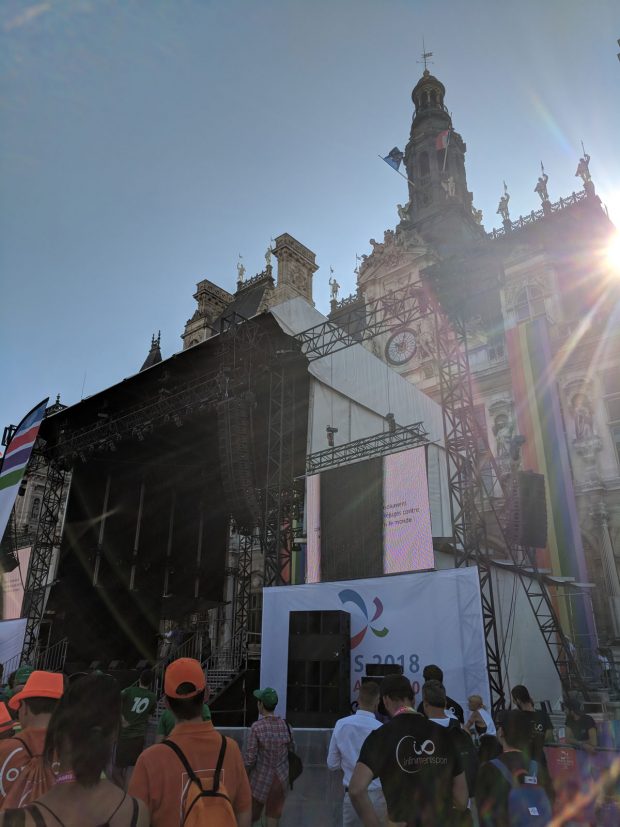 A sign of the city’s true dedication to its LGBTQ population, for the entirety of the Paris Gay Games, the city hall plaza at Hôtel de Ville hosted the Gay Games Village. Community support groups, activist organizations, and others opened stalls daily to serve as a meeting point for the athletes and other attendees. An outdoor bar and café provided sustenance when needed and regular speeches took place on the main stage.

And, of course, the sporting events… 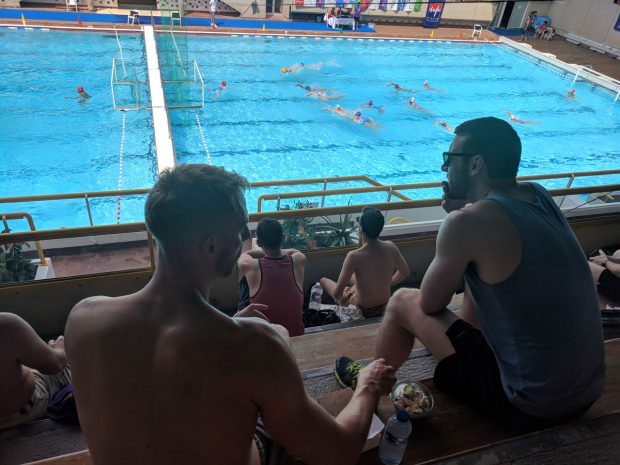 From cheerleading to water rugby, there were hundreds of sporting events. Attendance in the events was pretty straightforward. The Gay Games spreads a message that self-improvement is more important than your nationality or your performance, and that was reflected in the all-ages events.

The Gay Games message for support and diversity within the community was equally welcoming and inspiring. To see athletes of all ages participating and joining with one another for a wide variety of sporting events—it was one of the most comforting feelings to know that to be LGBTQ is to be part of a wider community of love and acceptance. 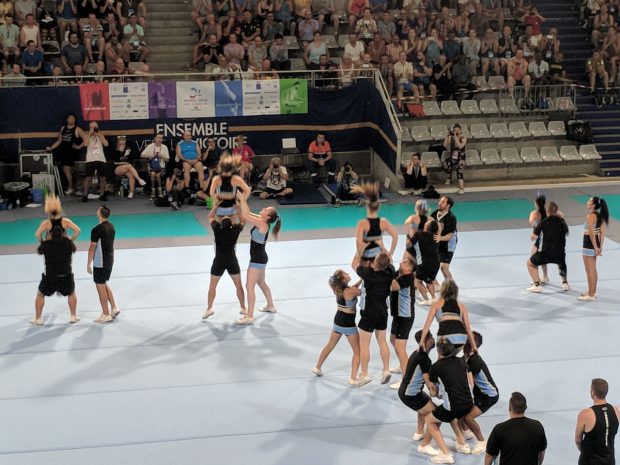 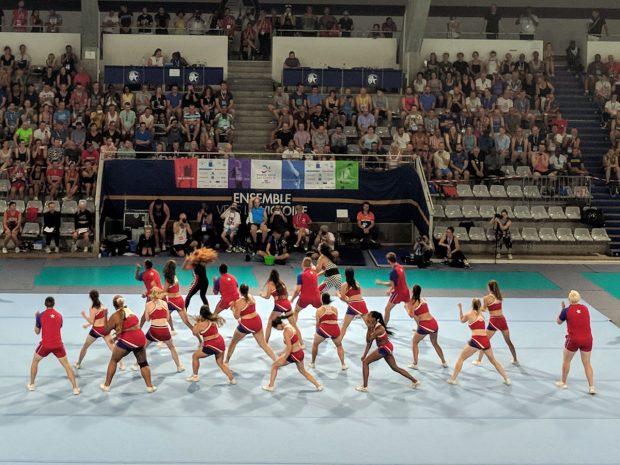 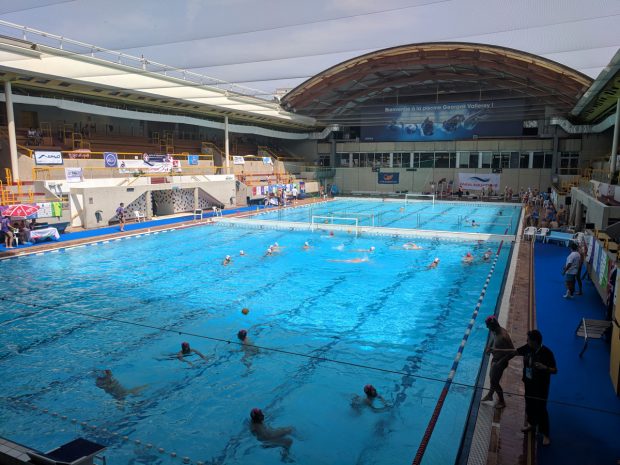 For more information and photos from the 2018 Paris Gay Games, visit this page.