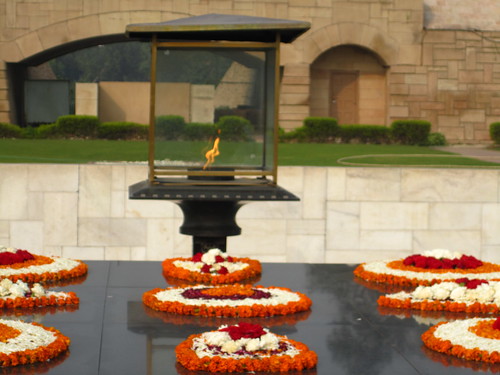 The Mahatma Gandhi memorial in Delhi, India was one of the few places in the capital city that I wanted to make sure to visit when I travelled around India last winter. Delhi has a lot of tourist attractions and the Raj Ghat area along Mahatma Gandhi Road is a great place to visit on tour of Delhi. The road (also referred to Ring Road on some tourist maps) follows along the Yamuna River. Along the Raj Ghat route are memorials to the deceased Prime Ministers of India.

My arrival in India in November 2010 was coincidentally timed with President Obama’s visit to India. Obama has repeatedly talked publicly of his admiration for Gandhi and his civil disobedience movement during India’s independence movement. So of course Obama visited the Gandhi memorial in Delhi as part of his state visit (though he wasn’t able to plant a tree in memoriam). It’s no secret that I have a passion for peace and an interest in societal issues around the world. So of course I planned to visit the Gandhi memorial as well. 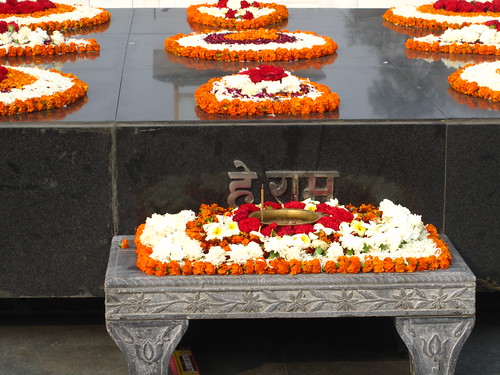 Close-up of the Gandhi memorial. The epigraph reads “Hē Ram” or “Oh God” (believed to be Gandhi’s last words)

While the Raj Ghat area is home to many memorials, Gandhi’s (the one actually called Rajghat) is probably the most popular. Like many holy sites around the world, you have to remove your shoes before entering. Raj Ghat is essentially a large park, but in the middle is an area walled off with lots of arches. There are quotations and translations written on the stone wall along the perimeter.

In the center of the square is a black marble platform which marks the spot where Gandhi was cremated. Many dignitaries leave flowers here and this is the main attraction of Raj Ghat. When I visited, there were continually small crowds who would follow the paths in the grassy square to this point and then respectfully visit the platform (which was roped off). An eternal flame sits above the shrine.

Raj Ghat is a place of extreme calm and quiet in the busy city of Delhi. The grassy areas along Ring Road seem to be a popular place for people to come and relax. I saw many young couples and families enjoying quiet picnics just on the outskirts of the memorial. 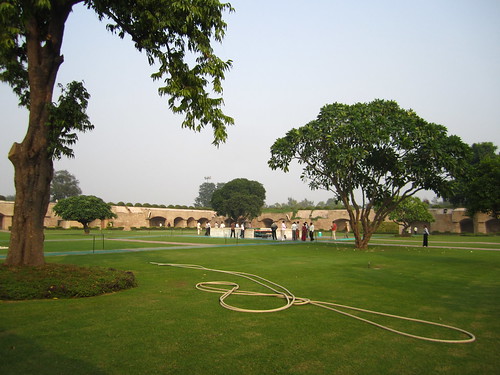 Inside Raj Ghat you weren’t allowed to walk along the grass. There were stone paths that winded through the courtyard.

One thing I found while travelling India is that many people share often what are very loud and very different opinions about any number of things—Gandhi amongst the best of them. Not all see him as a peacemaker nor agreed with his policies, as predicted. Understandable considering his impact on India’s history and often controversial views on nonviolence and other political matters. I spoke with some people who truly admired him and considered Raj Ghat almost a holy site, while others had little or no interest in visiting the Gandhi memorial. Democratic India’s founding father certainly arouses a lot out of people and, for that, I was deeply interested in visiting his burial place and discovering just a little bit more about Gandhi, his life and his role in India today.

If there is one thing I enjoy about travelling, it’s meeting interesting people and discovering the historical & inspiring ones as well. 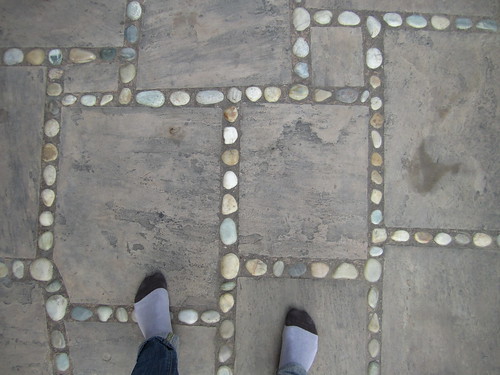 Inside Raj Ghat, you have to remove your shoes. There are places to leave them for free, or as is common in India, you can pay someone to keep them behind the “shoe check” desk to guarantee their safe return.