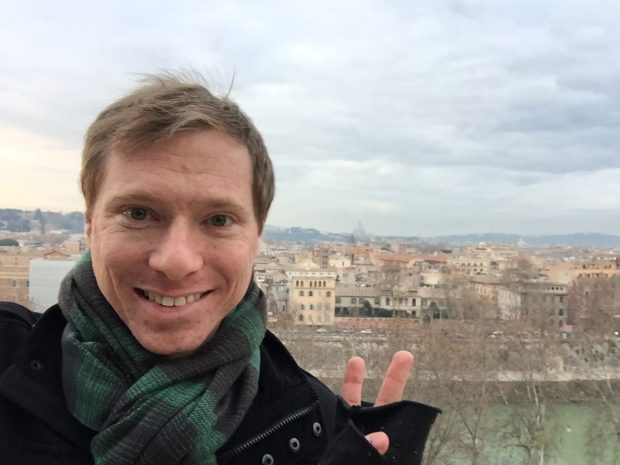 Rome in Winter – not so bad!

In 2015, Rome saw record numbers of tourists during the summer. And while that’s generally a good thing for the Italian capital, it also means long queues and large crowds in what’s increasingly a swelteringly hot season. So, rather than get my fix of Italian food, men and culture during peak travel season, I visited Rome a few weeks back—in January—when the weather was cooler but the queues were shorter. Here’s what you need to know about visiting Rome in winter—how to deal with the weather, and the benefits of visiting this time of year. 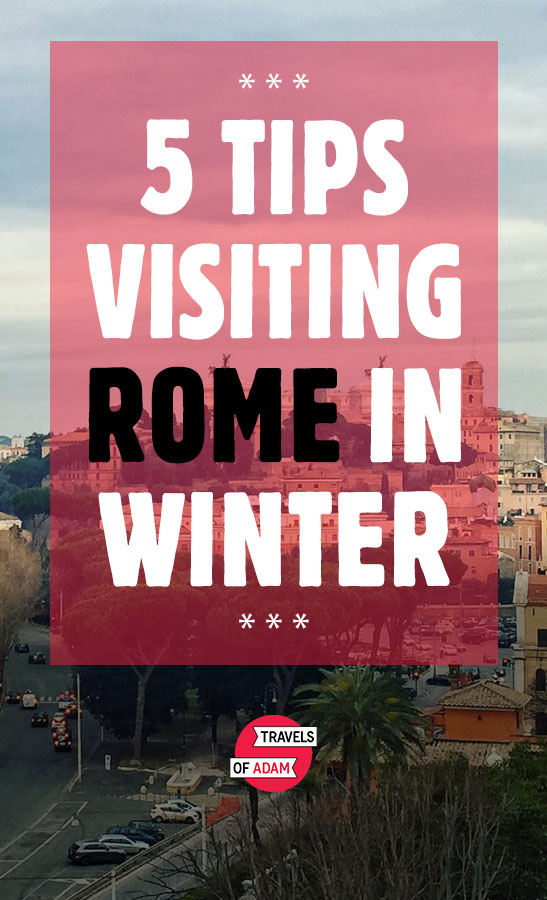 Rome in Winter—What You Need to Know

1. Take advantage of the shorter queues! 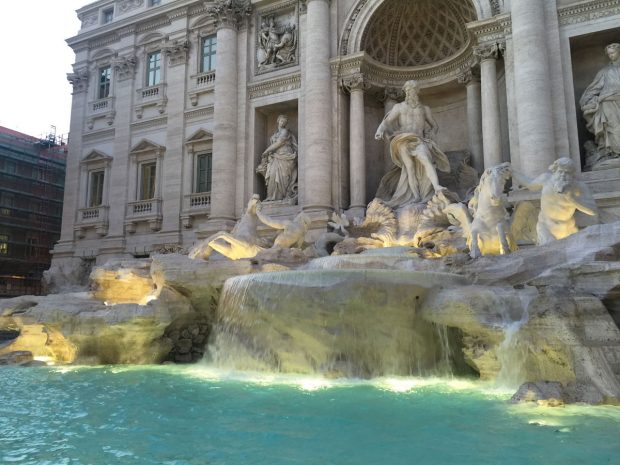 The Trevi Fountain just opened up after months of renovation — with very few people in sight!

This past December, Rome’s tourism numbers fell slightly from the previous year. Plus, with the winter woes, many tourists just don’t choose to visit Rome during the winter. Their mistake is your win, though, because Rome in winter is just as good as anytime of year. And you get the added bonus of smaller crowds and shorter queues. While in the summertime you might end up queuing up for hours outside the Vatican for a peek at the Sistine Chapel, in the winter, you can expect a much easier experience. And you’ll save some money, too! Many tour operators in Rome sell “skip the line” tickets, but in the winter, you just don’t need those!

Still, though, the Vatican is crowded year-round, so I’d suggest buying Vatican City Tickets to avoid the long line to get in.

2. Get great deals shopping in Rome…

After the holidays, Rome sees a number of great sales. While Rome isn’t the shopping capital of Italy (that title probably goes best to Milan), the Eternal City still manages to attract a huge amount of local and international brands. Lots of Rome’s cool, local designers and artisans are dotted throughout the Monti neighborhood, around Campo de Fiori in Via dei Giubbonari and around the Piazza Navona area in Via dei Coronari. You’ll find most major international brands (especially those with winter sales) along Via dei Corso in the city center.

3. It’s easier to get restaurant reservations 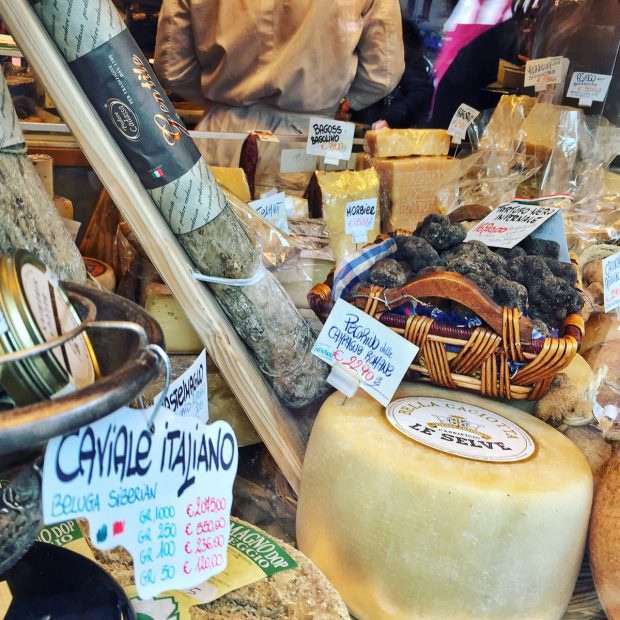 The Volpetti shop in Testaccio, discovered on an Eating Italy Food Tour, is one of the best places to pick up foodie souvenirs

Eating in Rome can be a tricky affair. It’s hard to know what restaurants are touristic, so it’s almost always best to ask for tips from a local. In my experience, taking a food tour is often the best way to learn about a city’s best restaurants—they often provide foodie maps which can help pinpoint the best places to eat in a city. And in the wintertime, reservations are just going to be that much easier to come by. In Rome, try the Eating Italy Foodie Guide for a helpful resource on the city’s best restaurants.

4. Tour availability is easier to come by! 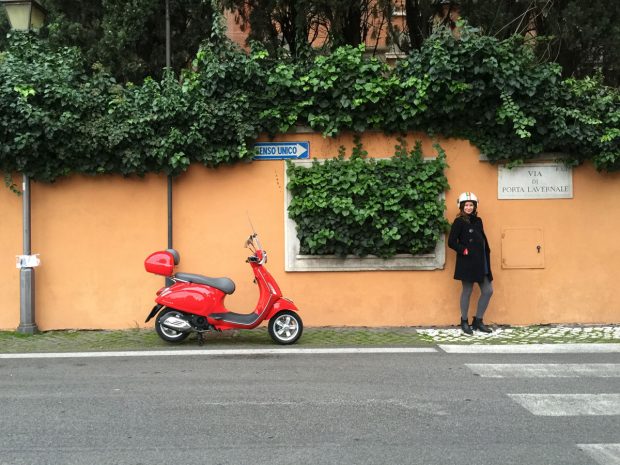 On one of the coolest tours in Rome with Scooteroma ❤

Rome seems to have a huge amount of cool tours on offer. And because of the comfortable weather year-round, it doesn’t really matter that many of them are outdoors. While some of Rome’s biggest antiquities, such as the Vatican Museums, the Pantheon and the Colosseum can be visited without a tour, Rome’s other attractions need a bit of guidance. One of Rome’s coolest tours is the small-group tours led by Scooteroma. On the tour, you get to ride on an authentic Italian Vespa scooter through the streets of Rome, stopping for food, tourist sites and incredible panoramic views.

Like any major tourist destination during peak travel season, it’s important to book in advance, but in the winter, availability is a bit easier to come by. (Maybe not for long, though, as I’ve just told you all how wonderful it is to visit Rome in the winter! Plus, this tour is super fun and cool, so make sure you book in advance!)

Because museums are so busy in the summer, it’s also easier to come by Palazzo Vecchio tickets and others. 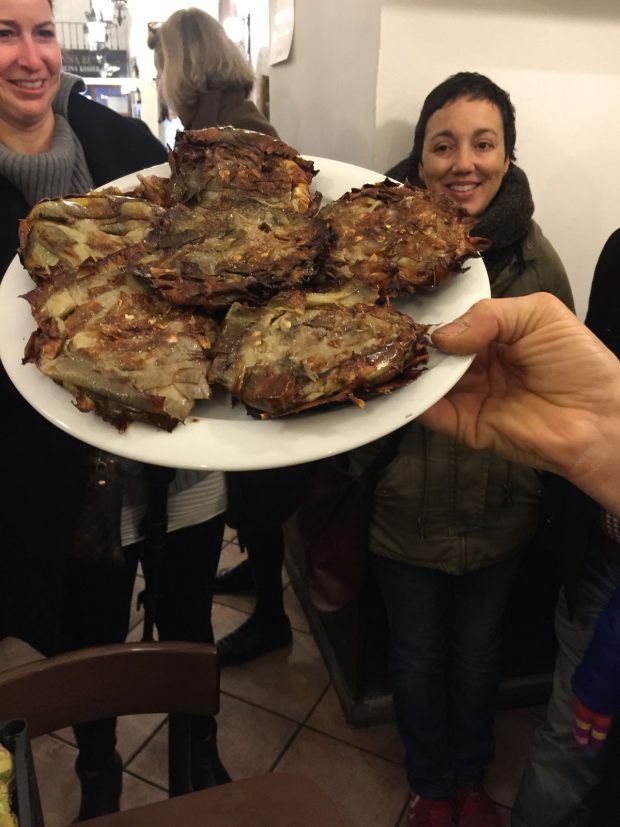 Jewish-style artichokes in Rome – best when they’re in season!

Rome has countless traditional foods, but one of the most popular Roman dishes is carciofi alla giudia and it’s best when artichokes (carciofi) are in season — in the late winter! Carciofi alla giudia literally translates as “Jewish-style artichokes” and is a true food speciality in Rome. The artichokes originated in Rome’s Jewish Quarter and are served deep-fried. They’re crunchy and delicious! Try them at Nonna Betta, or on one of the Jewish Quarter walking tours with Casa Mia Tours.

Need somewhere warm and cosy to stay while visiting Rome in the winter? Check out The Beehive—a stylish hotel/hostel located steps from the Termini station and easily accessible to Rome’s best tourist things to do. Their on-site café serves up an excellent organic breakfast every day, plus there’s a useful app with hundreds of local, insider tips available on their website. For more Rome travel tips, check out my full Hipster Guide to Rome with the best tips on people-watching, neighborhoods, nightlife, places to eat and more… 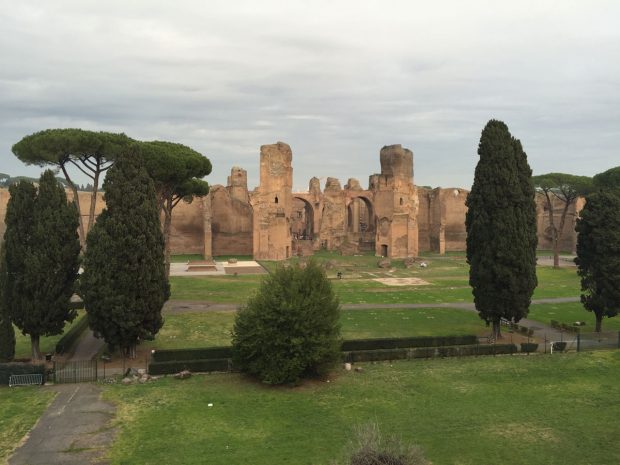 Notice how few crowds there are at Rome’s tourist sites during the winter! And the weather is actually pretty good, too!