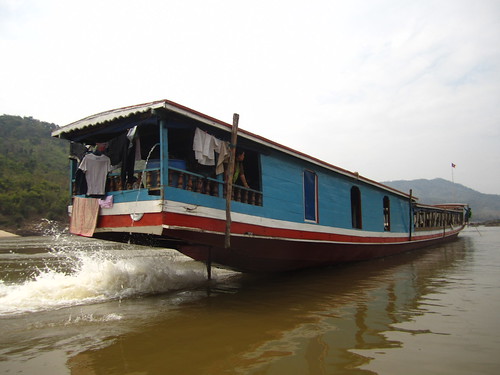 When my 30 days in Thailand had nearly come to an end, I had to decide how to leave the country. Many people make visa runs to Burma or to Laos, and seeing as how I’d heard such great things about Laos and I’m not quite up to traveling Burma, I opted to go east. I think a lot of people travel through Laos, simply to renew their Thai visas or to get to Vietnam, but really, this is a country you should see.

So, to get to Laos from northern Thailand, there is of course a bus, but there’s also the option to take a boat from Cheng Kong (on the Thai border) all the way to Luang Prabang in northern Laos. You can book either a slow or a fast boat, and every travel agency in the popular travel hub of Chiang Mai will book it for you. The slow boat to Laos takes three travel days from Chiang Mai; the fast boat takes two.

Taking the slow boat is not an easy decision. Because any Google search or Lonely Planet Thorn Tree forum search brings up terrible stories about overcrowded boats, uncomfortable seats and a lack of food & drink. I decided to risk it, though, because I had the time, and really, who doesn’t want to get on a boat?! 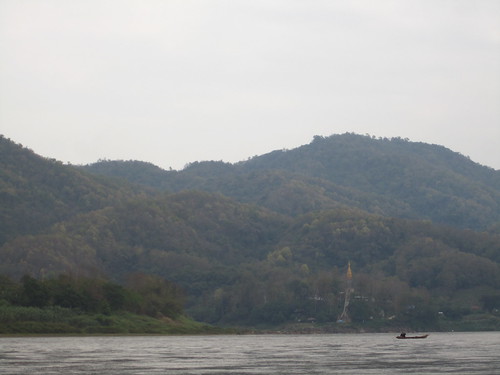 My slow boat to Laos was completely unlike every story I’d read about it online. Here’s how it worked for me (and I should mention, this was at the end of March which is kind of the “slow” season for travel in the region, so maybe my experience was exceptional):

I booked the three days of travel, including minivan transport to Cheng Kong, accommodation at the border and the slow boat from the border to Luang Prabang through my guest house in Chiang Mai. I know I paid way more than I needed to had I done it all on my own, but traveling alone, sometimes it’s nice to have everything taken care of for you. And this way, I was on a minivan with a bunch of other travelers all taking the same route. And many of us became good friends in a matter of hours and ended up hanging out for nearly a week once we were all in Laos.

So, my minivan was supposed to pick me up at my guest house in Chiang Mai at 9:30am. But that eventually turned into 11am and we weren’t on the road until noon. Along the way, though, we stopped at the White Temple and a cashew factory for lunch. Like I said above, the 10-person minivan was full of other travelers and we all got to know each other fairly well during the ride.

When we arrived in Cheng Kong, we had to split into two different guest houses. We’d all booked through different places and so 5 us went to one place, and 4 to the other. Dinner at the guest house was provided for free (a really tasty homemade chicken curry, rice & veggies). Cheng Kong was a pleasant enough town, and several of us went out for a few beers at a nearby bar ’til about 11pm.

Day 2: Crossing the border to Laos

Again, our breakfast was provided for free (fried egg, toast & a banana). Every guest house also seems to provide you with a packed lunch so long as you booked the whole trip. I got a homemade tuna sandwich; people who were at other guest houses seemed to get packaged sandwiches with a banana and juice box.

Breakfast was at 8:30 I think, and we were meant to cross the border at 9am. A truck drove us the 2 minutes to the border–the Mekong River. We’d previously given our passports to the guest house who got us our Thai exit stamps for 100 baht (I think) + the exit fee of also 100 baht. At the Mekong border crossing, our boat taxi took us the 4 minutes across the river to Laos. There you walk up a small hill and fill out the Laos visa forms. For a US citizen, the tourist visa is $35 for one month. Most countries are between $20-$35 and it’s much easier (and a better rate) to pay in dollars than any other currency.

A man met us at Laos immigration who was to take us to the slow boat. I ran to an ATM after getting my visa so I could get some local currency. There’s also an exchange counter at immigration. A short tuk-tuk ride later and we were waiting at a restaurant/shop for a handful of other travelers before our slow boat could leave. I’d recommend buying a sandwich and some chips because you’ll be on the boat for about 6 hours on this day, and there’s really not much else to do except talk, eat and watch the scenery. 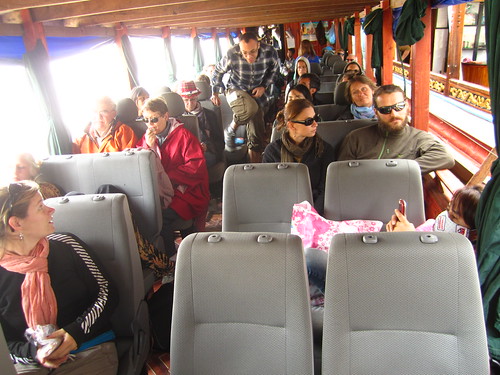 The boat was way nicer than I’d imagined with cushioned seats. Though it was a bit tight on the legroom, I definitely felt I didn’t need to buy the pillow that everyone had recommended I purchase. I was on the boat until around noon when we landed at Pak Beng, but not without a handful of stops to let off some locals. We also had to change boats at one point because there seemed to be some sort of problem with our engine. But it wasn’t much of a hassle and the next boat was much bigger, if not without less seats. But most people opted to sit on the floor anyways (that’s where the pillow would come in handy I suppose).

The scenery really is beautiful, though. 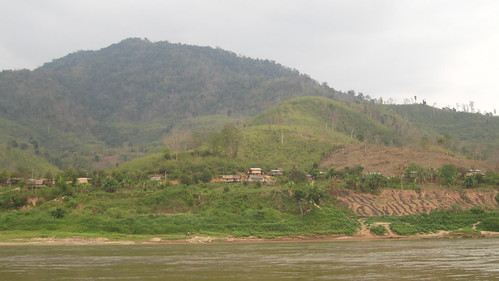 It was dusk at this point, so getting dark. About a million people will meet you at the boat to try and get you to their guest house. Lonely Planet’s guidebooks seem to tell horror stories of how dangerous this city is, but I didn’t hear one single bad thing or encounter any problem. Lonely Planet is great for fear-mongering.

A new friend from the boat and I shared a room with 2 double beds, a bathroom with a hot shower and fresh towels for 200 baht. Again, the Lonely Planet guidebook says that people won’t accept Thai baht here, but that’s a load of crap. Guesthouses seemed to prefer it.

Dinner and drinks with a bunch of friends from the boat, plus we happened to stumble on some sort of annual festival at the temple which was interesting.

Day 3: Getting to Luang Prabang

Though no one really specifically reminded us, we remember being told that the boat on this day would leave at 9am, and we’d be on it for 10 hours. In the morning, we grabbed breakfast, bought some food for the boat and headed to the dock. The boat left a little late. 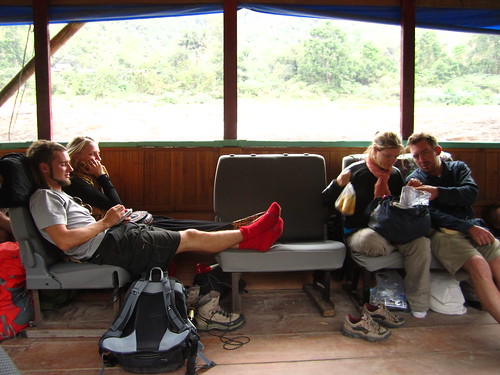 This was our third boat and it was definitely the nicest. Some people opted to lay on the floor again, but there were also plenty of seats – I had an empty one next to me. There was also hot coffee, tea & cool beer available for sale at the back of the boat. The weather was absolutely terrible this day–cold and rainy, and just about everyone was miserable, but had we had better luck with the weather, it would’ve been a beautiful day.

At around 7pm we arrived in Luang Prabang and everyone walked in different directions to find rooms (SpicyLao Backpackers is one of the few dorms in town and definitely has the most fun atmosphere if not the most dirty). Luang Prabang has ended up being my favorite city in Laos and the first night there didn’t disappoint. This city should be on your itinerary no matter how you get to Laos–slow boat or not. 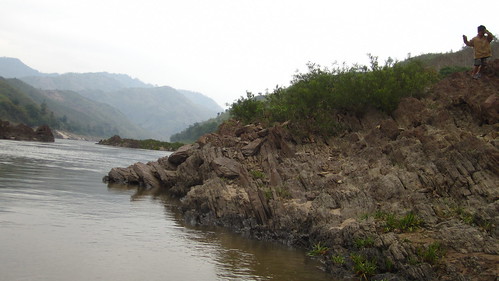