Sitting in seat 9E on my KLM flight to Berlin tonight, after the high from a weekend in Amsterdam, I just couldn’t deal. The flight had been delayed over an hour. I was sitting in an uncomfortable middle seat. I was sad; the day had been…meh. Taylor Swift came up on my phone — All You Had To Do Was Stay. I looked out the window, over the shoulder of my neighbor in 9F. (I’d won the armrest battle, by the way.) And I couldn’t help but smile. For the first time in a few hours.

Volume at full blast, I put the full 1989 album on. And all was suddenly right with the world.

“They are the hunters, we are the foxes, and we run. Just grab my hand and don’t ever drop it, my love. Baby, I know places we won’t be found, and they’ll be chasing their tails trying to track us down.”

Someone once laughed at me for listing to T Swift. I was hurt a little. Mostly annoyed that he thought his music taste was superior to my own. 1989 has become my go-to “cheer up” album. Maybe I’m just a stereotype, but I don’t care. Swift’s poppy beats and catchy lyrics get me every time. When her songs come on at the my favorite gay clubs, I jump, I throw my hands into the air, I sing along. It’s infectious, really. And that’s probably how, on this flight, I ended up staring out at nothing in particular, bobbing my head and imagining myself dancing for the full 55 minutes.

“When you’re young you just run, but you come back to what you need.”

Listen, I’m not stupid. I know Taylor Swift is a marketing machine. But she’s also a loud and vocal advocate for artist rights — and I can’t help but respect her a little bit for it. I know The Huffington Post and other online blogs love to poke fun (while so obvs gushing over her perfectly tailored celebrity lifestyle): stories about her Instagram, her celebrity friends, her shade.

There’s something so charming and fascinating about Taylor Swift and her carefully curated public life. And, like any other artist, that comes through in her music. I’m obsessed. She’s my idol. My spirt animal. My inspiration. 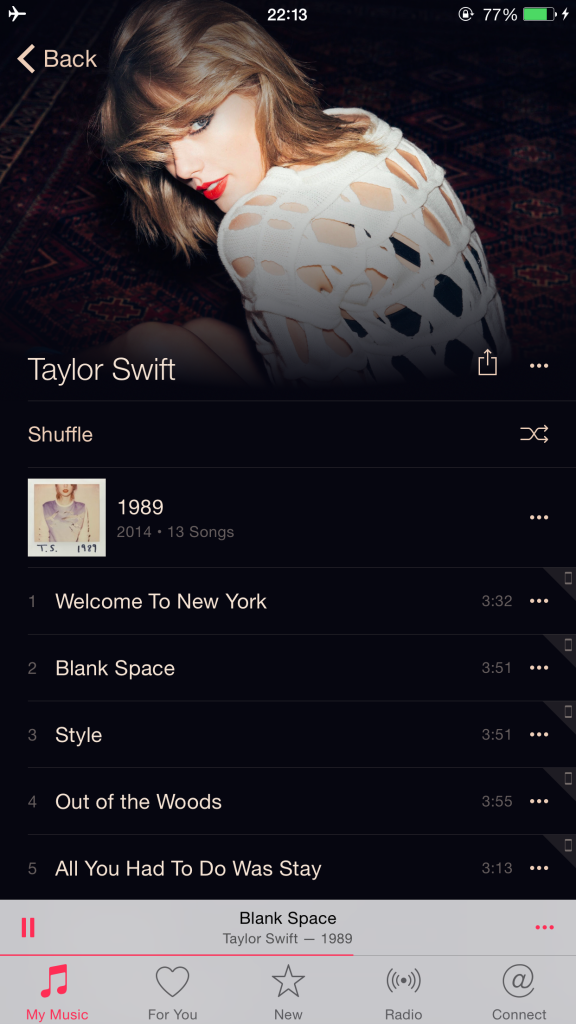 If you don’t already know it, Taylor Swift’s music isn’t available on Spotify — but the 1989 album is totally worth the cost. Get it here. Pack this album for your next trip and no matter how boring your flight is, you’ll deplane happy.