It’s Monday! Which means I’m starting my third week of Spanish lessons at the Clic Language School in Seville. I’m currently enrolled in a 4-week course so this is my mid-point. I thought I’d take a little bit of time to reflect on my time so far in Seville, on my language course, on my efforts at learning and what it all means.

My Time So Far in Seville

If you’ve been reading my daily travel diary (basically: my Tumblr blog called My Spanish Story), then you’ve probably seen that I’ve been busy having a good time here. I’m pretty happy to be learning Spanish in Seville because the winter here is mild to say the least! Sunday was 21°C (that’s 70°F) and the sun was out all weekend. I haven’t seen this much sunshine during winter since…I don’t know when!

A bit of winter sun just means that it’s easier to be outside exploring my temporary home. And because the Sevillianos here have been so friendly, it’s not so hard to meet people. There are two weekly Couchsurfing meetups in Seville and they’re really active groups. I’ve met some truly fantastic people in Seville which is going to make it all the more difficult to leave in a few weeks’ time.

Oh…and speaking Spanish here? First, I was afraid it’d be hard to understand the local Andalusian accent/dialect. It’s actually not as difficult as I thought it would be. It’s always been difficult to understand when españoles speak quickly because the words blur together, but in Andalusia they seem to drop off entire letters (gracias become gracia, for example). That’s fine by me because I’m probably making plenty of mistakes when I speak anyways, now maybe I just sound Andalusian! (Makes it easier when I can’t remember if a pronoun is masculine or feminine…) 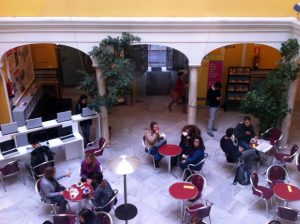 Inside the Clic language school’s building, just near Plaza Nueva in central Seville

I’ve now completed two weeks of classes at the Clic Language School. We had a test this past week so I’ve actually got a good sense of what my learning capability has been. I can say this: Es más o menos bien.

Actually…I did pretty terrible on my test, but that was because I second-guessed myself one too many times. The real moment I realized when my Spanish language skills weren’t actually AWFUL was on a night out bar-hopping in the La Macarena barrio (neighborhood). Over the course of the night, I met more than a few españoles who only spoke Spanish. Throughout the (very late) night, I definitely was able to practice a lot of real-life vocabulary. It’s funny…how when you need to speak the local language, it all just comes to you. I’m sure that if this had happened a month prior, though, without a daily 4-hour class to keep me practicing, hearing and speaking Spanish every day, I wouldn’t have ever been able to keep up. Sure there were gaps and holes in my vocabulary, but it worked all the same.

The famous clic language school — now where both my sister and I have studied Spanish! Learn more: http://www.clic.es

My classes at Clic have had their ups and downs. On my first few days in class, I was a bit worried that my level of Spanish (currently A2) just wasn’t up to snuff. But with time I seem to have caught up with the class. While there were seven students in the class when I started two weeks ago, now we’ve got 10. I’ve definitely noticed that things move slower with more students, but I actually enjoy the back-and-forth camaraderie that we’ve got going in class.

There’s a lot of humor mixed in with the learning, too. Our teacher, Ana Maria, is friendly and approachable. I feel comfortable asking her any of my countless questions (in Spanish, naturally): when do you use para or por again? where is the best tapas restaurant in Sevilla? what’s the economy really like in Spain?

Thankfully most of the students in my class are studying Spanish for more than just a few weeks. I think I might be there the shortest amount of time, actually, with four weeks in school. That means everyone’s pretty dedicated to learning Spanish which just makes everything that much more easier. If there were any passive students in the class, I think I’d be a lot less motivated than I currently am.

Just a bit of winter sunshine in Seville! ❤

On Learning Spanish in Seville

So far I’d say it’s been a success. It’s actually kind of funny. My first week here I was struggling to switch between German (alemán), Spanish and English. Every time I couldn’t remember my Spanish vocabulary, a German word would pop in. Or sometimes even worse: German grammar messed up my Spanish sentence structure. That’s because I’ve been using German as my only foreign language for well over a year, so I seem to default to it. It was a struggle to start thinking, writing and speaking in Spanish, but with 4-hours of Spanish class every day, I’ve managed to wipe out the German :)

Other than that initial struggle, I’ve just found I actually enjoy using what few Spanish words I know whenever I can. At various tapas restaurants, sometimes they offer me an English-language menu, but I flat out refuse to look at it. Instead I’ll use the translator on my iPhone. It forces me to learn (and re-learn) word-after-word, but otherwise how would I learn?!

After two weeks of classes, I can say I’m really grateful for this opportunity to learn Spanish. I know I’m learning things. And my appetite for learning hasn’t ceased. I’m going to classes, speaking in Spanish when I have to. I’m writing down words I don’t know. I’ve even watched TV a few times in Spanish, and Buscando a Nemo. It’s been a good two weeks. I can only imagine what my Spanish will be like in another two more!

For live, in-the-moment updates about my adventures learning Spanish in Seville, check out My Spanish Story blog.