Travel blogs, photos and stories from one of America’s greatest cities: Chicago, Illinois 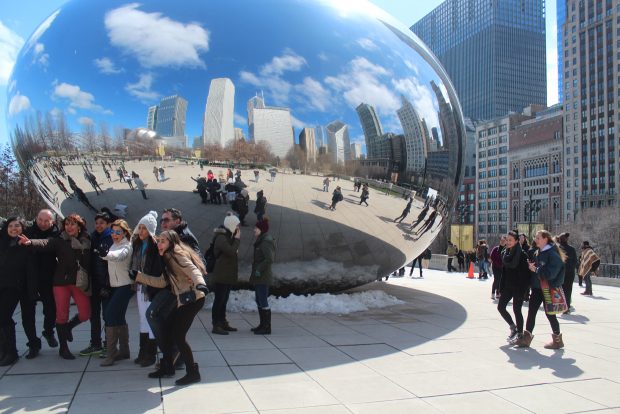 The Windy City, the third largest in the US, is home to a vibrant gay scene, excellent food, loads of cool art and tons of history. Don’t miss it! Start here with my basic Chicago travel tips, or jump down below to read my latest Chicago travel blogs.

The weather in Chicago can be extreme. In summers, it gets very hot while winters can be bitterly cold with heavy snowfall. In summer, things definitely get busier and prices rise slightly, so early fall can be a good alternative time to come to the Windy City.

And it’s not earned that moniker for nothing, it is indeed very windy, so be prepared! Regardless of the weather, though, Chicago is a booming metropolis (the third largest city in the US) so there’s always something cool and fun to do at any time of year.

Hang out in Logan Square – Chicago’s unofficial hipster neighborhood, this is a great place to eat out with many of the cafés and restaurants serving up cool fusion cuisines, a bit healthier and just as tasty as some of the more touristic downtown restaurants.

Visit the 103rd floor of the Willis Tower – Get a view from way above the Chicago streets in the second tallest building in the US and visit the Skydeck, where you can stand on the glass ledge that juts out from the building at 1,353 feet up and dare yourself to look directly down. What a rush!

Eat all the food – There are more than a few world-class chefs that come from Chicago and its midwestern home-cooked roots…though I personally preferred eating a lot of the city’s street food and cheaper eats. There are hipster neighborhoods, alcoholic slushies served in clubs and live music spilling out of every possible venue.

A tour can be a great way to experience a city like Chicago which has so much to discover. A guide will know exactly where to take you and you’ll end up seeing a lot more of the city than if you wander around by yourself.

Chicago is one of the gayest gay meccas in North America, if not the entire world! There’s so much gay life in the city that it can be a bit overwhelming in knowing where to begin looking. Boystown, is of course, the historically gayborhood, and still has a lot of fun stuff to offer, but there are queer venues popping up all over the city, especially in Pilsen, Andersonville and Wicker Park. These are a few of the best places and events you should know when visiting gay Chicago.

Roscoe’s Tavern – In the heart of Boystown, this place is a quintessential gay bar. There are random celebrations of the music of various gay icons from Madonna to Britney, as well as frequent live performances, often drag. It’s deceptively small from the outside, but once you’re in, it’s actually pretty big, and it’s very popular!

Reeling Film Festival – One of the longest running LGBT film festivals in the US, this takes place every September. Showing a large range of queer made films from around the world, it’s run but a not-for-profit organisation that serves the city’s independent film making community.

Chicago Pride – Dating back to 1970s, the city’s pride event attracts over a million people from around the country and beyond. It’s a city-wide event and a really magical thing to experience. Don’t miss it if you visit Chicago in the summer!

Read More about 5 Summer Festivals & Parties Worth Traveling For

I Went to Chicago and Ate All the Food

Photo essay & restaurant guide to Chicago places to eat & drink — With only a weekend in Chicago, and just 3 meals a day (okay—sometimes 4), I only had so much time to eat. But eat I did!

Road Tripping in Illinois – The Highlights

Read More about Road Tripping in Illinois – The Highlights

Chicago is cool. This isn’t just some boring midwestern city trying to be cooler than it is. This is a city that deserves much more hype than it gets.