I (heart) Berlin and Berlin’s epicenter is Alexanderplatz. It’s one of the city’s biggest transport hubs and though the main platz in front of the train station is often filled with festivals, carnivals and daily events, there are lots more things to see. Alexanderplatz is a great place to just wander around and get lost. I’ve always loved walking in the shadow of the TV tower. And I hear there’s a great cupcake shop nearby, too. 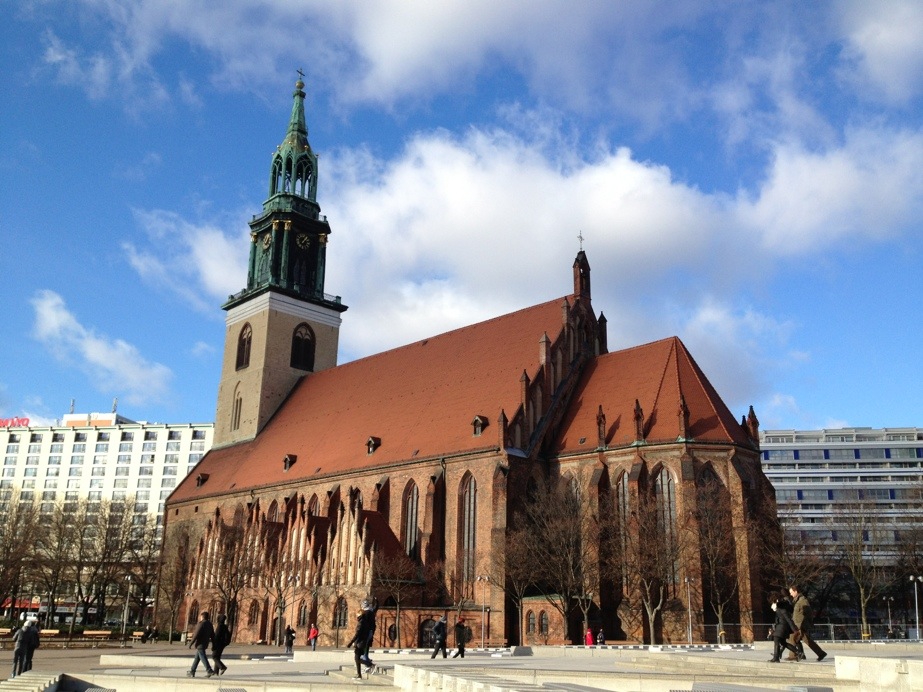 The Neptunbrunnen plaza in Berlin is one of my favorites—especially on beautiful sunny days like this one. The plaza, just south of Alexanderplatz (the main central hub of Berlin) is a great place to relax in the shadow of the TV tower. I was going to an Occupy Berlin demo when I took this shot in early January.

St Mary’s Church is believed to have been built in the 13th century. t.h.i.r.t.e.e.n.t.h. century! Sometimes in Berlin when I come across dates like this, it’s hard to imagine I’m actually in a city so old. I honestly just cannot imagine what the city would have been like. Is the place where I’m standing now—was there a building there? A flower market? Sometimes you have to stop and think about it before realizing how ancient and old a certain city or destination is. I continue to be amazed at the longevity of our world and our society! 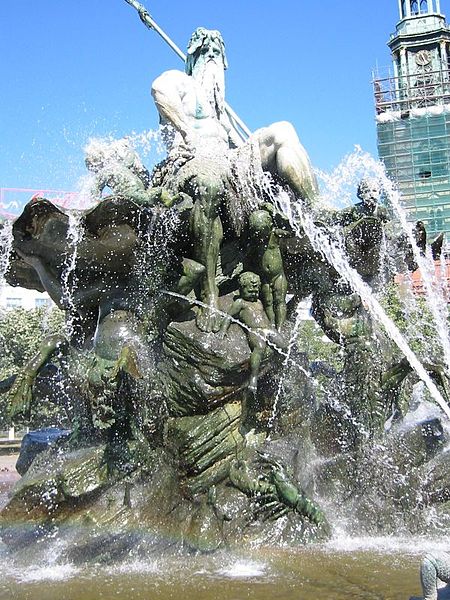 The baroque fountain in the plaza is from the end of the 19th century—a timeline I have a little less trouble understanding. The four figures on each corner standing around the god Neptune represent the four main rivers from the Prussian empire. Just goes to show that water and nature will outlast us all. There may not be a Prussia anymore, but the Rhine River still runs strong.

The Neptunbrunnen fountain is a popular meeting place. Major protests and demonstrations will usually use Neptunbrunnen as a meeting point. I’ve heard of several marches that start here at Neptunbrunnen and make their way to Brandenburg Gate. It’s not a long walk but it’s not a short one either.

Neptunbrunnen wasn’t always located in its present spot. After the war, the fountain was re-located from inside Berlin’s Royal Palace to the open-air plaza near Alexanderplatz. Still a fitting location, however, as it stands in front of the über-socialist TV tower. 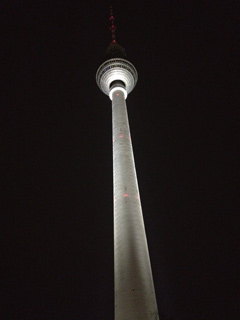 One of Berlin’s most iconic symbols, the fernsehturm is Germany’s tallest structure. Built by the GDR in the 1960s, the television tower has since become a symbol of the city. I saw some hipster chick with the Berlin skyline on her forearm and the most obvious bit of the tattoo was obviously the TV tower. I won’t lie that I had an urge for a similar tattoo.

You can go up inside the TV tower but it strikes me as a bit too touristic. Plus, it’s the city’s most iconic symbol. Why would you want to be all up inside that? Then it wouldn’t be in your photos. That’s why when I was playing the Berlin tourist last summer, I chose to go up the Berliner Dom (that’s the Berlin Cathedral) instead. From there I had a perfectly lovely view of the city, which includes the Fernsehturm as every photo of Berlin should.