Rome, that eternal and blissful city, is not always the easiest place to find good accommodation. Because of the incredible amount of tourists who visit day in and day out, standards don’t have to be so high for the city’s many cheap hotels. Most are located near Rome Termini station making them convenient. If you’re flying into Rome, chances are you’ll still be taking the high-speed train connecting the city with the airport, and trains from throughout Italy and even all of Europe stop at Termini. It’s like a beating heart for much of Europe’s railway network.

Budget hotels and hostels are scattered in the several blocks surrounding Rome Termini station. The Yellow Hostel is located a short 5-minute walk and was easy to find. Upon looking at it from down the street as I approached, I was immediately hesitant. From the street, it looked just like all the run-down 3-star hotels and cheap, backpacker-unfriendly hostels that I’d just walked past. But as soon as I entered the reception area, I knew this was a different kind of hostel. What a relief! 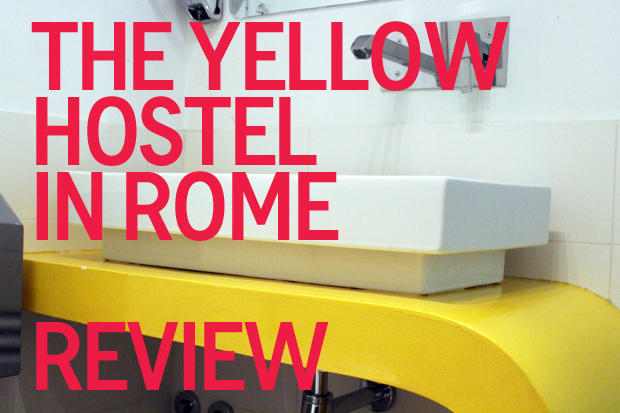 The very first thing I noticed upon entering was a sign that said “love is love” and had some little stick-figure drawings of couples holding hands. It wasn’t Valentine’s Day or anything, so I was a little confused…but it was nice to see some overt gay-friendliness. European hostels can often feel like an almost exclusive heterosexual-normative world, so when they go out of their way to show all-inclusiveness, I’m all for it. Way to go Yellow!

Check-in at the hostel was at 1:30pm, so I was a little early when I arrived. No problem, though. They gave me a keycard to access the upstairs lounge and with their free wifi which worked throughout the building, I was set. The luggage room was accessible with the keycard which made me slightly nervous, but the receptionist told me they’d never had any problems.

When I was hanging out in the lounge, the room was noticeably 40% gay. A big-screen TV was playing some crappy movie and a punk-rock guy was chilling out on the couch (obviously a bit haggard from the night before). It was sociable enough and the restaurant downstairs was crowded with other backpackers on Skype and hanging out or having lunch on the outdoor sidewalk patio. 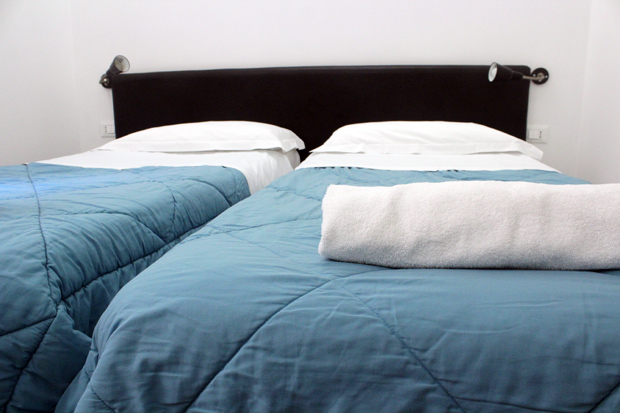 My room was pretty basic. A private double. But the bed was super comfortable (really!) and the private bathroom was colorful. There was even a mini-fridge in the room which is handy for those that order one too many pizzas.

The only problem I had was with the wifi in my room. It just didn’t work despite saying there was a strong signal. Thankfully I wasn’t spending much time in my room anyways, so I didn’t need it much, but, as always, it would’ve been nice to have. The hostel had advertised itself as a “Twitter” hostel and there was a sign on my bedroom door about how I could tweet to them with any issues, but they actually never responded to my tweet. Kind of disappointing because I thought it would’ve been a great initiative.

Would I stay there again? Yes! I didn’t get the chance to see the dorm rooms so can’t really share an opinion on them. 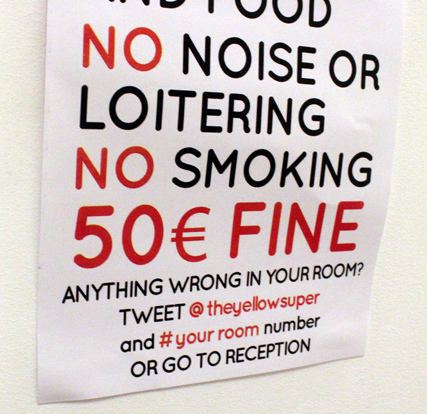 I tried the Twitter Concierge but it didn’t work :( My recommendation is to just go to reception

I reached out to Yellow Hostel about staying for one day in Rome and they were quite friendly. They provided me with a private room for the night for the purposes of this review. All opinions are my own.