Home » Films » Some Rambling Thoughts on Living the 20-something life 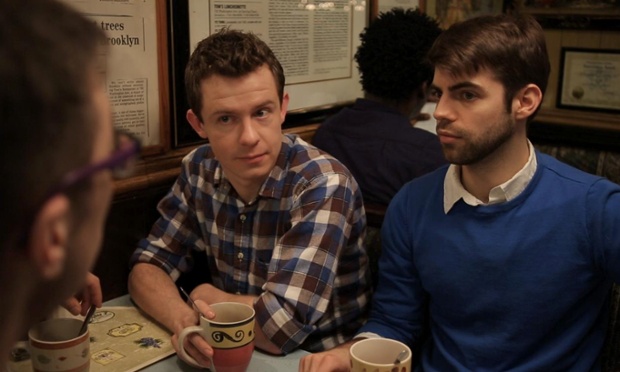 Puzzled looks on characters from the web series, The Outs—about 20-somethings living in Brooklyn

I’m feeling a bit funny today. Whether it’s because of the grey sky outside my window, my mind aflutter with ideas, or simply because I’ve been laying in bed for over an hour distracted by one too many emails, I don’t know. Ich weiß es nicht.

Yesterday was one of those days where your mind is racing and you’ve got a million little ideas floating around—none of them will stick, likely, but it’s nice to have them, to collect them. Thoughts of the future, my goals, my seemingly non-existant plans for a future. I don’t know about you, but these are things that pop up in my mind all the time. And while I’m always trying to physically do things to achieve them, more often than not I just circle back around—lost and as confused as ever. And that is what’s about to happen with this blog post.

Is there anything worse than an elder (and by that I mean, anyone a day older than me) looking down upon you and treating you like a fool? Simply because you’re younger and therefore must be more naive? We’re supposed to treat people with respect, but so often I find people who don’t treat the younger generations with any modicum of respect. Simply providing veiled wisdom wrapped up in a friendly, “I know what’s best for you” tone. And I’m not talking about grandfathers and grandmothers. Everyone wants to impart their wisdom on a different generation. From the 30-somethings looking down upon the 20-somethings, the yuppies upon the hippies. And so on and so forth. Of course, it’s not all bad. And some people want the advice. But it’s that tone. That “I know you more than you” tone that destroys.

So how do I fight it? I listen to my peers. Maybe some call it peer pressure. And maybe it’s a bubble, but hey… we can figure this out together, can’t we? Sure it can be dangerous if you hang out with dangerous people. But it can also be beneficial if you’re brainstorming life, thinking about the world, with those that share your passion. This comes up all the time when backpacking. I remember weeks of sitting on Indian beaches, meeting and talking with travelers from the world over. We may have been different ages—from those in college to 40-somethings—but we were all on an adventure. We were looking for answers. Asking questions and listening. Not willing to say “this is the way” but instead we were thinking.

Thinking is a thing I really love to do. Perhaps I spend too much time thinking and not enough time doing. And that’s something I plan to work on. But for now: we’re thinking.

TV shows like ‘Girls‘ (I know, I know – I’m sorry for bringing up the series that everyone loves to talk about) seem to embrace this thinking mentality. It’s what attracted me to the show in the first place. It’s no surprise that it’s written by a 20-something because it pretty much captures the crazy thoughts and ideas going through my mind. I mean, it’s a TV show so some of it is exaggerated obviously, but the mood and atmosphere of the show certainly match the mood and atmosphere of my life. Or at least of the life I’m working on building today. It’s no surprise that there have been so many reviews and criticisms of the show as much as of the writer. Girls pretty much dares to speak for the 20-somethings today—something no one else is going to do for us. And it does it pretty well, too.

There’s another show I watched recently: The Outs. Again, it’s written by a 20-something in Brooklyn. It’s about—you guessed it: 20-somethings in Brooklyn. But this web series (available for free in its entirety online) is different. The show got its successful start through Kickstarter last year, and then hit the tipping point when it reached the gay media. I like it because its characters are ones I can identify with, but also because the characters seem as dysfunctional and confused as the actual people I know in my life—to a much more real degree than in Girls.

What keeps me enamored with these 20-something TV shows is that they’re not written by some stuffy person looking down upon my generation—but instead they’re from my generation. Listening to characters talk about not having enough money, about “blogging” (is that all we 20-somethings do these days?) or bitching and whining—this is my life. And I suspect it’s also a part of yours.

I realize I may not be on the side of the majority with this one, but I appreciate the inward-looking nature of my generation. I’m proud of the fact that I don’t know what I’m doing and that I’m trying to figure it out.

Maybe I’m just some punk kid (not a punk, fyi). One of these days I’ll finally figure out what I want out of life. And maybe then I’ll stop asking questions (don’t count on it). But for now, I just want people to stop telling me what to be or how to act. I am me. And I’m okay with that. I’ll figure something out.

Anyways…I’m rambling. You should just watch this web series. Because it “gets” me. And I get it. Plus each episode is full of sexy Brooklyn hipsters.

The Outs: State of the Union from The Outs