Los Angeles is the ultimate playground for adults with its warm weather, eternal sunshine and seemingly endless amount of good-looking guys. Of all my trips this year, the one week I spent in Los Angeles was one of my favorites—one week exploring Los Angeles’ tourist sites, the bars, the clubs, the beaches and the boys. So many boys.

They say LA is full of beautiful people, and they’re not wrong. Even if it seems the locals spend all their time hanging out by hotel pools, on the beach or at the gym, (which I’m still convinced is true), Los Angeles somehow still parties hard each and every night of the week. Sunday Funday is a legitimate weekend event in Los Angeles. And whether you spend it sitting around the hotel pool drinking Micheladas or bar-hopping in West Hollywood, there’s no shortage of great bars.

The city is full of wayward drag shows, uppity cocktail lounges and glittering dance floors. Eccentricity is the scene’s VIP pass of choice. You might expect Los Angeles to have a cookie-cutter gay scene, but as I discovered this year, that’s far from the true. From the hipster neighborhood of Silver Lake, to the hotel bars and the gay ghetto in West Hollywood, Los Angeles has a bit of something for everyone. 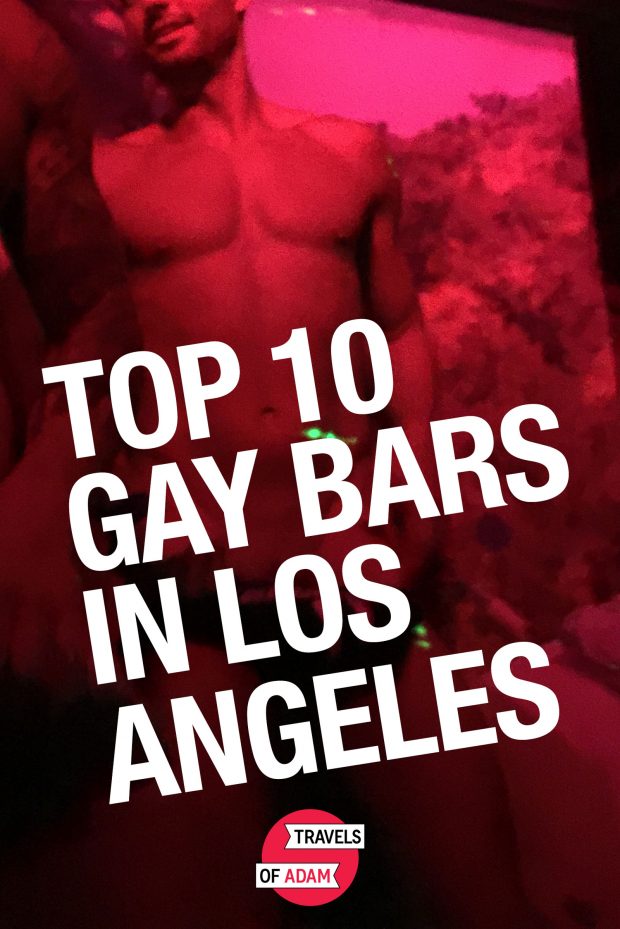 This is THE gay club everyone knows. Join thousands of gay partygoers every Thursday night for an all out bash unlike anything else in the area. Located at the Avalon Club on Vine Street, Tiger Heat turns a massive dance floor into a rave-like experience. Definitely great for the younger crowd as Tiger Heat is 18 plus. Complete with go-go dancers and music video projections, this hotspot is also known for attracting celebrity talent. Amid the Lady Gaga lookalikes, there might just be the real thing. Party starts Thursdays at 10 pm and runs until 3 am. What you do after that, though, is up to you.

Every city has one, leather/daddy/ fetish bar. They’re all across the country and all in the name of the patriotic eagle. Eagle LA is most certainly one of the hottest in the country. With late-night crews that have seen it all, this gay bar comes with its fair share of history. Carrying the torch for LA’s longstanding leather community, Eagle has become the epicenter of all things smooth, black, and shiny. This place is for the older generations and young guns that can hold their own. Things get tamer on slower nights with pool, cool drinks, and some good old conversation. Don’t be shy. Everyone is here for the same thing: a good time.

By far one of the most laid back gay bars in West Hollywood, Gold Coast is not your average LA hotspot. It’s has a Cheers feel where everyone knows your name. Down to earth with friendly vibes all around, Gold Coast is a bit of a dive but in a good way. The drinks are strong and at a good price. It’s less shenanigans and more of a place to strike up a conversation and throw a few back.  You’ll find a mix of ages and interests here. It’s just a great place to relax and unwind.

Nearly nude men as far as the eye can see! Micky’s is newly renovated and full of style. This West Hollywood dance club comes with plenty of personality. Crushing tunes and endless dancing makes Micky’s one of the most eventful gay clubs in town. This is really just a place to shake your booty. It’s screaming room only and always decked out for celebrations. You’ll love the drag shows and the sexy bartenders. The party keeps going until 4 am, much later than most. All in all, it’s the best place to party.

What list would be complete without The Abbey? Known as an institution of gay culture throughout West Hollywood, this place has everything you need for a great night out on the town. Relax in the outdoor cocktail lounge or dance on the bar. It has an anything goes type of attitude. Plus, they have delicious bites for the dining crowd. It’s absolutely worth a peek if you’re in the LA area. The history alone is worth the trip.

This one is definitely for the history buffs. It’s been open for as long as anyone can remember. Located in West Hollywood right on Santa Monica Boulevard, Mother Lode is a laid back place that borders on the definition of dive. You’ll find a rustic interior with some great tunes (mostly from the ’80s and ’90s) and a casual, comfortable atmosphere. The drinks are affordable and strong—and the bartenders are friendly, making it a great place to end a long night out.

The most “hipster” of these LA gay bars, Akbar in Silver Lake has a simple but strong ethos. All ages and interests are welcome—with very little pretension. The dance room in the back of the club is small, but gets a crowd on the weekends. For somewhere different than the West Hollywood scene, Akbar fills an important niche in gay Los Angeles. Definitely a cool hotspot worth checking out.

Rage has to be one of the most rambunctious choices on this list. It’s equal parts restaurant and nightclub. You can get greasy favorites such as a hamburger and fries and signature cocktails. But the second floor is mostly about strutting your stuff. This is a place where everyone likes to let loose. There’s usually something happening every night of the week, so it’s easy to just show up and make new friends. Skip the food and come for the themed parties like Gameboi Fridays (Asian pop) or Tuesday night drag shows.

Fubar puts you right in the heart of the action. With pounding music, risqué clothing and lots of hormones, this is the place to be in West Hollywood. Themed nights come with plenty of surprises and guest appearances. It tends to get pretty packed on weekend nights so be prepared to sweat and get close. It’s definitely a great place to meet someone, as you’ll find all ends of the spectrum covered. It’s just out of the way to be one of the coolest places in town.

As one of the classiest mentions on this list of LA’s best gay bars, the Upstairs Bar at the Ace Hotel is an absolute beauty. Recently renovated and serving delicious Middle Eastern cuisine, this is a great place to enjoy a gorgeous view from the rooftop and lounge in a peaceful, upscale environment. It’s quiet enough for a casual conversation with a friend. You’ll find all of the most posh clientele here. With its unusual décor and rapid word of mouth, it’s quickly becoming one of the hottest places in the city.

For more Los Angeles tips, check out my mini gay guide to the City of Angels — including restaurant, hotel and cultural recommendations.