Since 2009, the ILGA-Europe has released an annual ranking of European countries and the legal and policy situations for LGBTQ people in those countries. The 2018 Rainbow Index and Map (released today) examined the laws and policies from 49 European countries using a set of 58 criteria.

Ahead of the International Day Against Homophobia, Transphobia and Biphobia (May 17), the Rainbow Map provides a useful resource for understanding the LGBT rights situation across Europe. And the rankings provide valuable insight into how the politics of Europe have shifted in the past year. Unfortunately, what today’s news shows is a slow-down on progressive policies. A lot of these countries still have a long way to go for full-equality for their LGBTQ citizens—an important note to remember.

The 2018 Rainbow Europe Map and Index reveal that fewer countries are moving up the country ranking; many are stagnating, including countries that are traditionally perceived as equality frontrunners. Malta takes the top ranking for the third year in a row with a 91% rating, while Belgium inched up to a second-place ranking (with a 79% rating) thanks to updated legal and gender recognition procedures. 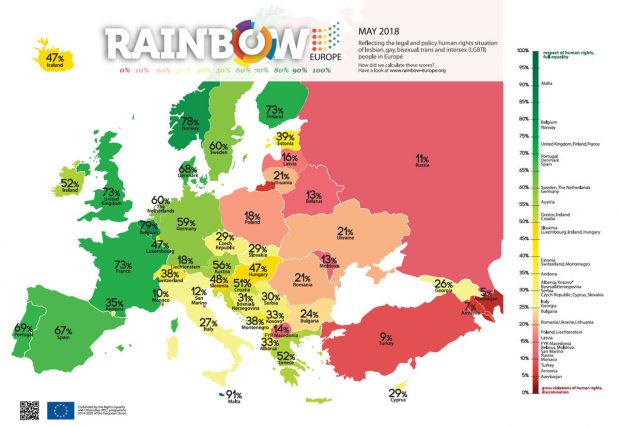 The top 10 LGBT-friendly countries in Europe

Interestingly, while Malta continues to feature at the number one spot for LGBT-friendliness, other countries that are typically viewed as progressive are not among the Rainbow Map’s frontrunners—including the Netherlands which actually dropped outside the Rainbow Europe top 10. (Germany doesn’t even make the top 10 list even with their recent LGBTQ-friendly laws and policies enacted in the past two years).

How ILGA-Europe ranks the countries

In order to create the Rainbow rankings, ILGA-Europe examines laws and policies from 49 countries using a set of 58 criteria and sub-criteria. These criteria are divided between six thematic topics: (1) equality and non-discrimination; (2) family; (3) hate crime and hate speech; (4) legal gender recognition and bodily integrity; (5) civil society space; and (6) asylum. 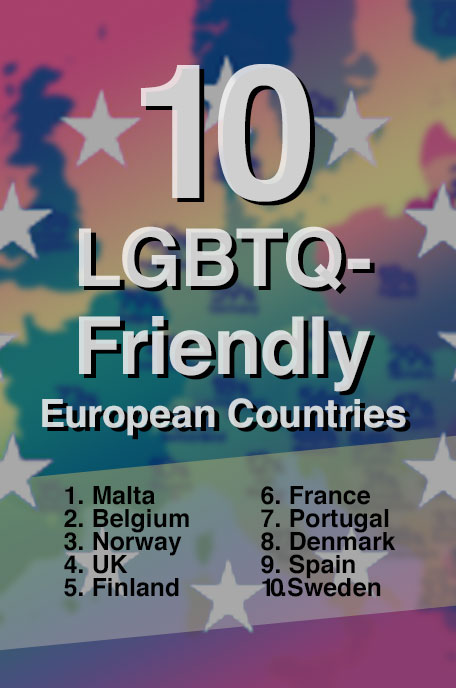 ILGA-Europe is the European Region of ILGA, the International Lesbian, Gay, Bisexual, Trans and Intersex Association and is a driving force for political, legal and social change in Europe and Central Asia. ILGA-Europe represents 500 member organizations in 45 European countries. View the complete Rainbow Index and Map with additional data points here. 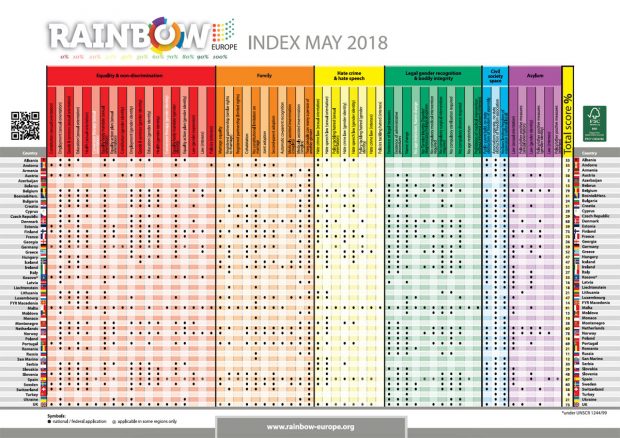