When I first stepped out of the airport in Phoenix, Arizona, the heat hit me right away. It was a stifling 37ºC and that desert heat would persist for the entirety of my weekend. Famous for over 300 days of sunshine, Phoenix is tucked in a desert valley with a sprawling population across several cities making up the metropolitan area. It’s one of the fastest growing regions in the United States, and thanks to a young population, a longstanding art scene, and a unique setting in the desert, the greater Phoenix area is increasingly recognized for its cool and unusual things to do.

Sure, it’s also a bit conservative (hey, Arizona), but the state capital is surprisingly hip and the gay scene is increasingly ranked among America’s best. My super gay weekend in the city was just like a stereotypical gay weekend out in other more traditionally gay cities. Lots of boys, art, late-night romps and wild adventures: Phoenix — it wasn’t what I was expecting!

The Weekend Guide to Phoenix

Set in the desert, Phoenix and its surrounding cities offer a number of different outdoor activities (especially great in the winter, though available year-round). Arizona Outback Adventures (AOA) run day tours of hiking, mountain biking, stand up paddle boarding and kayaking in the Phoenix and Scottsdale area. Look out for species native to the region such as the Saguaro cacti (a symbol of Arizona), roadrunners and even wild horses. If hiking isn’t your thing, Hot Air Expeditions run hot air balloon tours through the Sonoran Desert (in both morning and afternoon, depending upon the time of the year)—the perfect kind of romantic desert activity! 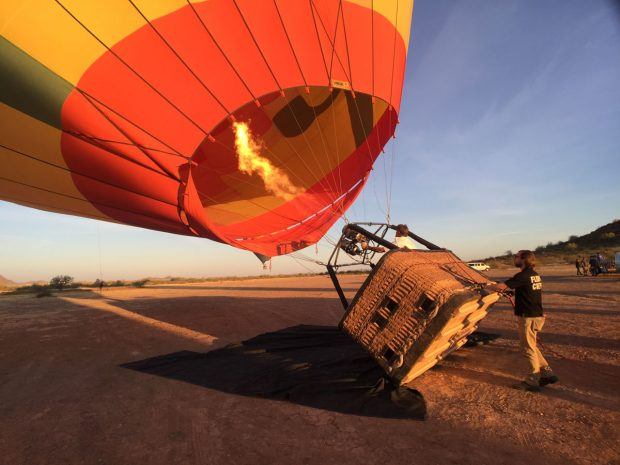 Hot air ballooning in Arizona over the desert

The Sonoran Desert, which cuts into Phoenix, is one of just four deserts in the United States and is home to the Desert Botanical Garden – one of the world’s largest collection of arid-land plants. A collection of artworks by legendary glass artist Dale Chihuly stand at the entrance to the botanical gardens, near a cute café and gift shop where you can buy your own desert plants (the newest trend in souvenirs: plants).

While Phoenix has a lot of great outdoor activities, sometimes it’s just too hot (especially in the summer). It’s recommended to visit the outdoors in early morning hikes (bring plenty of water!) and then spend your afternoons exploring some of the other highlights. The Heard Museum regularly hosts traveling art exhibitions. The museum also features important exhibitions on the many cultures and art of the southwestern Native American tribes, plus contemporary Native American art. It’s an excellent way to stay indoors and get some culture. 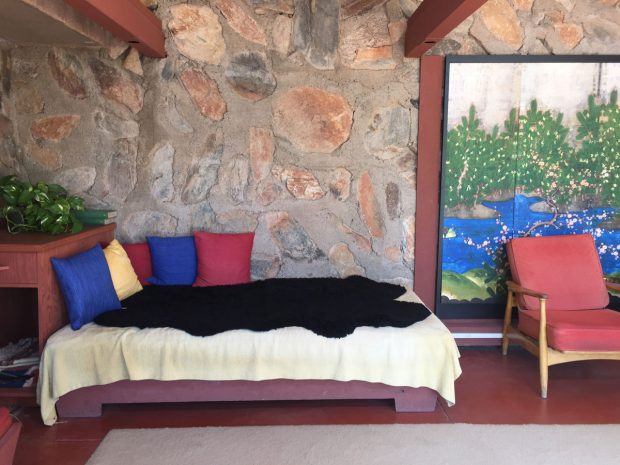 For fans of architecture (hi!), Phoenix is most important as being the winter home of Frank Lloyd Wright at his home and studio at Talesin West. The complex was built in the 1930s and still operates as an architecture school today. You can visit on a 90-minute guided tour through select rooms and buildings of Talesin West.

While many of the local Phoenicians spend their early mornings outdoors, hiking the trails or exploring the Botanical Gardens, that doesn’t mean they don’t know how to have late nights. When the weather is a bit cooler, the city comes alive with an energy unmatched by other Southwestern cities. First off, Phoenix is home to a burgeoning craft beer scene (like many other American cities). Arizona Brewery Tours offers customized to many of the locally-owned breweries. Taste the 20 different taps at Mother Brunch (as well as their legendary mac & cheese dishes—omg lush) and then visit the outdoor garden at O.H.S.O (as well as their beers and craft distilled liquors) for the perfect way to end a casual evening. 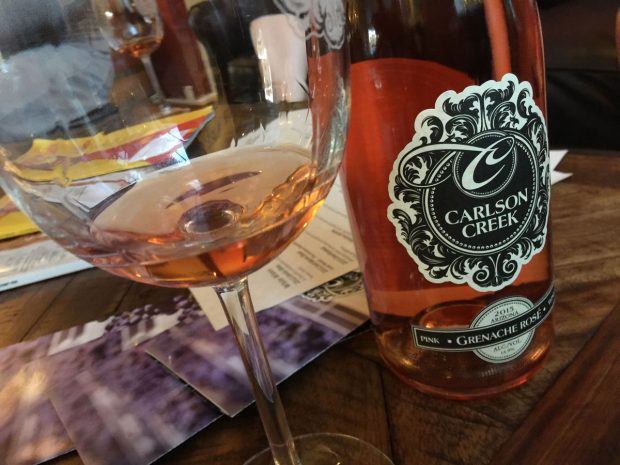 In downtown Scottsdale, you’ll find a lot of great bars, wineries and restaurants—as well as one of the region’s best gay bars: BS West. Start a healthy evening at FnB farm-to-table restaurant run by Chef Charleen Badman—a James Beard semifinalist—with truly innovative vegetarian and organic dishes. Just next door is BS West for late-night dancing (and regular weekday happy hours) with two dance floors, go-go boys and flat-screen TVs blasting all your favorite pop tunes. My first and only time at the bar and I ran into someone who knew me—BS West is clearly the place to be!

For a more comprehensive guide to Phoenix’s gay nightlife, check out the LGBT map at the back of each edition of local print magazine Echo Mag. Along with party and event listings, it’s a helpful guide to get situated. Charlie’s is the local cowboy bar with a massive outdoor patio, a mixed crowd of men and women, and regular drag shows. The Cash Nightclub and Lounge is another country bar, this one with a large dance floor for square dancing, and it’s a definite lesbian hangout. Check out their drag bingo on Tuesdays if you’re in town longer than a weekend. After hours, Karamba Nightclub stays open until 4 a.m. with Latino and top 40 hits (and a taco truck open all night out front). That’s where the real heat is! 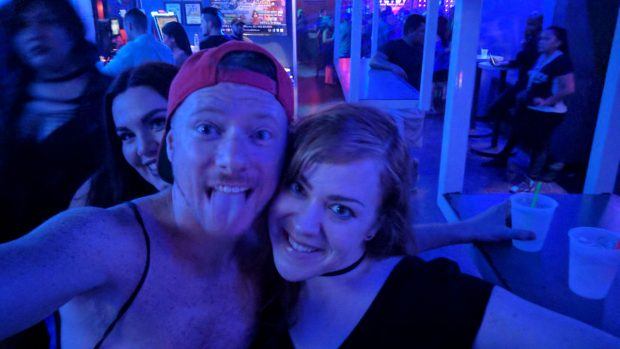 Late night in Phoenix at Karamba – shirtless, of course!

And when you’re ready to continue your party during the daytime, there’s no better place than the pool at Hotel Valley Ho in Scottsdale. Grab a cabana early, set up with some cocktails and sunscreen and spend the day lounging poolside with a mix of Phoenix’s local party crowd and a rotating mix of tourists. 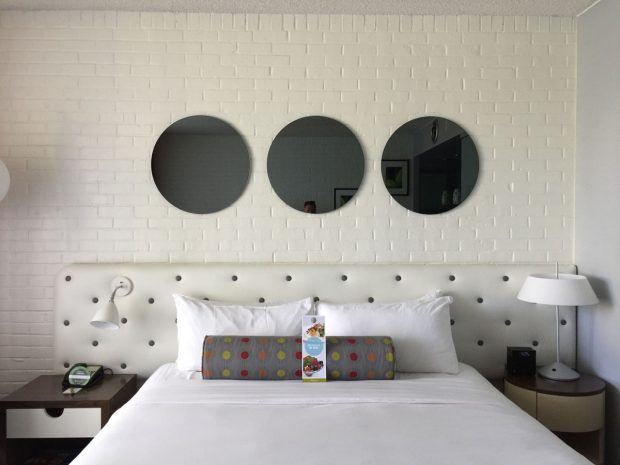 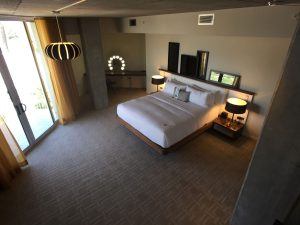 The Hotel Valley Ho is one of the most iconic hotels in the Phoenix and Scottsdale region. Though it originally opened in 1956, it was recently renovated though keeping much of the mid-century modern architecture intact. The urban resort is walking distance to historic Scottsdale and its many art galleries, wineries, and restaurants and still attracts celebrities to its chic and sunny space. Many room suites open right up to the swimming pool areas (there are two!) and the casual resort vibe, cool design and friendly environment make it a great place to stay. Room prices from $180/night. 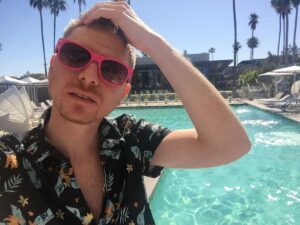 One of the newest resorts to open up in the greater Phoenix Area, Andaz Scottsdale Resort & Spa sits on a 20+ acre desert oasis designed to fit within the landscape. Palm trees sit amongst the small bungalows and a large pool area acts as a central focal point. Throughout the rooms, lobby, restaurant and gift shop, you’ll find locally produced art by some of the artists from the nearby, non-profit Cattle Track—an historic artist compound that dates to the 1930s. Room prices from $320/night. 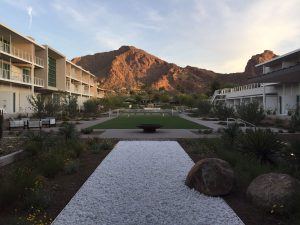 Just outside of Phoenix, in the luxury suburb of Paradise Valley, sits the new Mountain Shadows Resort—quite literally in the shadow of Phoenix’s most famous hiking trail through Camelback Mountain. While the property is new, it was earlier the site of a luxury southwestern hotel for decades—a place where celebrity guests like Liz Taylor, John Wayne and Bob Hope visited. Today, a decadent pool and golf course match the mid-century modernism style of the hotel. Room prices from $210/night.

My visit to Phoenix was supported by VisitPhoenix and VisitScottsdale. You can read more tips about the city on my complete Phoenix guide here. 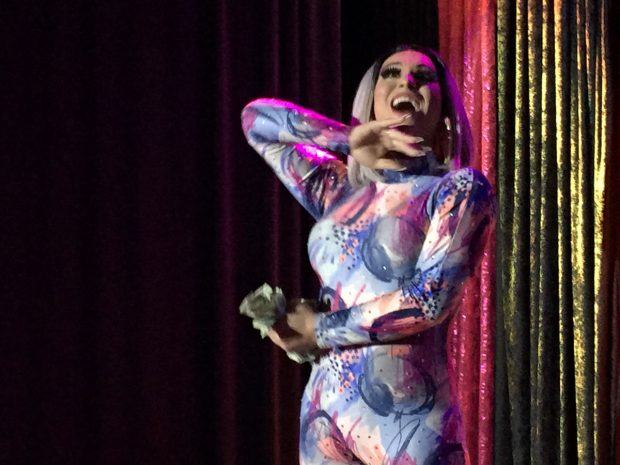