Home » Europe » Going on a Eurotrip! 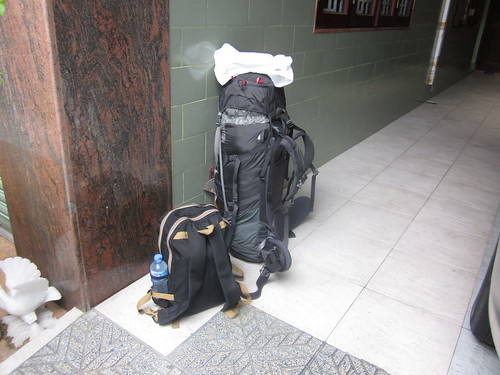 My backpack, all spiffy & clean in Saigion – ready for its next adventure!

Today I’m flying to Europe! I’ve been traveling around the world for over 13 months now and I’ve seen and done a lot, but really, there is still one place I’ve wanted to see and do a lot more—Europe. It’s a little bit of a guilty pleasure for me, because I’ve been to Europe several times already. In fact, I even started this trip last May in Spain. Whatever. I don’t care. I like Europe and even if it’s probably too expensive for my budget, I’d rather lose all my money there than most other places.

Don’t get me wrong, there are so many other places in the world outside of Europe that I want to see more of. But a few weeks ago when I was contemplating where to go and what to do with my life after Vietnam, there was one place that stood out. After three months in India and almost four in Southeast Asia (neither was enough time in each), I decided it was time to go back to Europe.

Yes, it’s probably the most expensive time of year to backpack around Europe, but hopefully with some cheap deals I can swing some good times. And so, with my backpack freshly cleaned (visiting my family in Saigon was like a whole new start to my trip), I’m ready to go.

My four weeks in Spain last year didn’t quite feel like a Eurotrip mostly because it was one country and I was never expecting to stay there as long as I did. This time it’ll be a little different. Well, kind of.

First things first, I don’t really have a plan. I do want to see more than a few places, though, so that’s something. I’ve been looking at some affordable travel options—specifically in Eastern Europe where I was originally planning to visit (but never made it to because plans change). I’m arriving in Berlin and want to spend some time there to get a good feel of the city (which I hear is very hipster). A million other cities have popped into my mind, all destinations from Berlin. But I can’t honestly say which direction I’ll go.

Second, I’m not really sure how much money I want to spend (or perhaps more importantly—how much money I actually have to spend). Well that’s not entirely true. I know how much money I have in my bank account. But because of some recent freelance work, my tax refund and what little profit I’ve made off this website, I have more money than I was expecting to at this point in my trip/life. I’m going into Europe with the knowledge that it’s expensive and that I can’t and won’t spend all my money traveling. I’m sure some people can and do, but I want to return “home” (or wherever it is I end up settling down in) with enough money to at least give me a decent start.

Cheap holidays aren’t always easy to come by, and I don’t expect Europe to be cheap at all. But I also don’t want to scrimp for the sake of extending my travels longer. I’m already going longer and farther than I expected to. For that, I’m very grateful. Seeing as how I’m still going strong, I don’t see much of a reason to sacrifice much for the sake of travel. I’m traveling to see and do things, and a few other reasons too. If I spend all my money in two weeks because I’m going to all the sights and doing all the things I want to do, then so be it!

Whatever happens when I get to Europe, I’m sure it’s going to be a lot of fun. And I’m definitely going to make the most of it. Whether it’s an ending or a beginning, I don’t care. I’m going because I want to go. And that’s just about all there is to it.