Simultaneously the sexiest and the sweetest gay film I’ve seen, Theo et Hugo dans le meme bateau (it’s English title: Paris 05:59), captures my feelings and my attitudes of being a gay millennial. While some gay movies just seem to perpetuate stereotypes, I often find them quite interesting—showing off elements of gay culture I’m maybe not as familiar with. We’re a diverse group, encapsulated under a number of different letters (LGBTQIA and it goes on!). But, in gay films, it’s often difficult to find myself represented—my own reality as a twenty-something gay man. Life for LGBT individuals has changed rapidly over the past few years—increased visibility, increased human rights and increased acceptance. And with that, we’ve seen a rapid rise in a new type of gay culture.

Gay movies, however, don’t always portray these new identities of being gay today. Too often they look back at the past, at the struggles and challenges and the advocacy. So when I stumble on a film that shows more closely the real-life experience of being gay today, I get excited. I’m excited to see myself, my identity, my experience on a big screen. I’m excited to see my feelings, my emotions portrayed in a way I can understand. Movies are often a window to our world—showing us stories that we can relate back to our own emotions. And, for me, a lot of gay movies don’t do that. But this one, Paris 05:59—it does.

And, unfortunately, I don’t think a lot of heterosexual people will see this film. Which is a shame—because it’s really a great representation of what it’s like to be a young, twenty-something gay guy in Europe today. If we’ve met in person in the past week, you’ve undoubtedly heard me talk about this film. About how it captures something really special, something really unique. It’s sexy and it’s sweet. And it leaves you wanting something more. 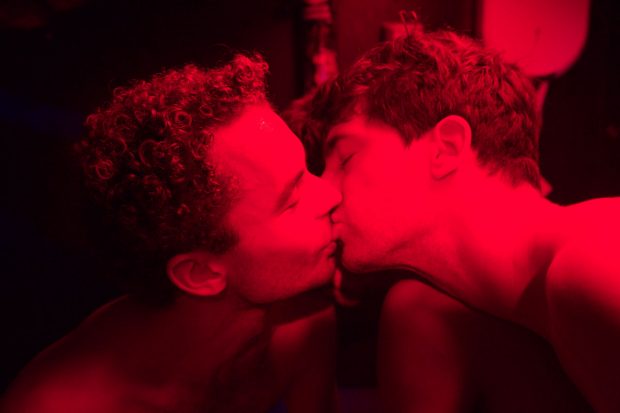 The movie starts (and this is why I think heterosexuals are going to miss out on it) with a hardcore gay orgy. Now, I know what you’re thinking. I just waxed poetic about how this movie is a great representation of my life, my experience, my generation. And while the gay sauna experience (dark rooms full of naked, sweaty guys in the throes of anonymous passion) is still alive in Europe, I don’t necessarily believe the scene is something we’re all familiar with. Plenty of my gay guy friends avoid the saunas and the sex clubs, the dark rooms and the fetish bars. But, in this age of easy sex, of drugs and datings apps and chill parties, there’s something to be said about today’s open-minded (and sometimes reckless) attitude toward sex.

Sex is easy today. And so that’s what this movie presents. It shows us sex is easy by opening with a nearly 20-minute sequence taking place in the basement of a gay sex club in Paris full of a relatively diverse group of guys, all naked, bathed in red light. Some might recognize the gay sex club experience—making eye contact with a stranger, spotting a guy across the room, freely available condoms and lube, the need to gently push someone away with a silent hand gesture. It’s all very real.

And so is the danger.

Here’s how the movie unfolds. A guy, Theo (played by Geoffrey Couet), is alone in a room full of naked men. It’s clear he’s spotted someone he’s interested in, Hugo (played by Francois Nambot). They’re each having sex with other guys and it’s not until eye contact is made that the room falls apart in their eyes—and they move to one another. In the heat of the moment, sex happens. And then, leaving together, Theo is both shy and quiet, while Hugo rambles on about this special feeling, this attachment, this almost-love. Little quips about how beautiful the other one is as they walk to one of the city bike rentals in Paris. It’s after 4 a.m. (as a timestamp on the screen shows) and the streets are mostly empty. It’s Paris at night.

It’s only as they’re riding on bikes together, side-by-side through Paris’ empty streets, that it becomes apparent Theo, in the active role, didn’t use a condom. As it’s quickly revealed, Hugo is HIV+ which Theo couldn’t have known. There’s a moment of anger, a call to the HIV/AIDS hotline and then the romance, this surreal love that comes through the two actor’s compatibility, is broken.

The night continues. Theo visits the emergency room of a hospital to get PEP treatment (emergency HIV medication needed after potential exposure), at first alone, until Hugo shows up once again—for support. Theo’s worried, obviously, after having come in contact with HIV but unsure of what happens next. A meeting with a doctor (played by a real doctor as it was revealed during the Berlinale Q&A) explains the situation. Twenty-eight days of pills and the need for a follow-up.

The movie moves on from this. And from the brief HIV scare, the boys end up going for a late night döner; life goes on. Along the way, they meet other strange and slightly surreal individuals from the night. An older, homophobic man in the hospital waiting room. A pensioner woman on the Paris metro on the ride into work at a luxury hotel. The Syrian man serving late-night kebabs. These fleeting encounters reinforce this idea that life goes on. There’s a normalcy and a simple kindness to these strangers. A reminder of the world we live in today.

As the night escalates, ultimately to 5:59 a.m., the emotions these two boys feel for one another fluctuate. There are tender and sweet moments and ones where they’re angry or scared. In short, it’s a film about a budding romance between two boys who meet, first have sex, and then a relationship (possibly?) grows out of it. They reveal secrets as if they’re fast friends, they share hopes and fears—but only after they’ve already had sex. And they share this experience of the HIV scare, the HIV test, discussions of PrEP and PEP. (Read more about what PrEP is here, including essential facts and things to know.) 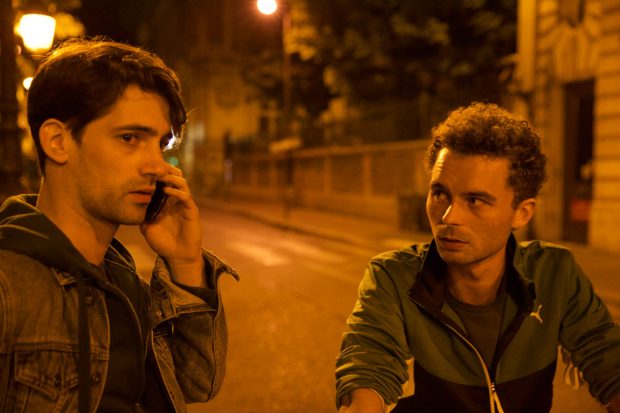 Too often, gay cinema that touches on the subject of HIV or AIDS becomes dramatic. It’s the focal point of the story. The scariness of the situation. The family troubles. In Paris 05:59, the subject matter is there, but it’s the first time I’ve seen where HIV isn’t victimized, where it relates so truthfully to it’s presence in the gay world today. Don’t get me wrong, it’s a serious issue, but what this movie does it make it relatable and real in a way only my generation (I think) can actually relate to.

In typical French cinema fashion, there are these surrealist moments—often through the words of Hugo who spills words and thoughts and ideas throughout the night, in a sort of mad and crazy way. It’s sweet and tender and romantic and reminds me of real love, those feelings you get when your mind is a mess, when love overpowers all your other sensibilities.

The movie was filmed in real-time over the course of 9 nights and 15 days (total) in Paris. The two lead actors were found from a casting call on the Internet. As revealed at the Berlinale, the directors said the original script went through the original 28 days of the PEP treatment but was changed to be just the single night. It’s something new and radical, and a way to present this new HIV normality in the gay world today. Directors Olivier Ducastel and Jacques Martineau deserve much praise and admiration for this movie, for this story, for this novel representation of what it’s like to be a young gay guy, in love, in Europe, today.

Look out for this film at future film festivals. Read more of my Berlinale film reviews here, or check the Berlinale website for additional information about the film festival.