I love words. A lot. I love them spoken, and written—on advertisements, in theater plays, scribbled on walls and shared on Twitter (sidenote: have you seen this Twitter account yet?!?). As a native English speaker, I’m more prone to enjoy English words, but Spanish ones are sexy, Italian ones bellissimo and German ones—unbelievably informative.

Words inspire me. They’re my biggest motivator. When reading, if I stumble on an out-of-place or unusual word, I might stop in my tracks, repeating the word syllable after syllable. I’ve got a copy of the book Everything is Illuminated where a single word caught my attention so much, I practically poked a hole through the page staring at it.

As a lover of words—and yes, even poetry—I’ve grown to really appreciate and value one of the English language’s greatest wordsmiths: Mr Shakespeare. So much so that this isn’t even the first time I’ve written about my love affair with Shakespeare. And on my triumphant return to London after 7 years away, I made a point of visiting Shakespeare’s famous Globe Theater. 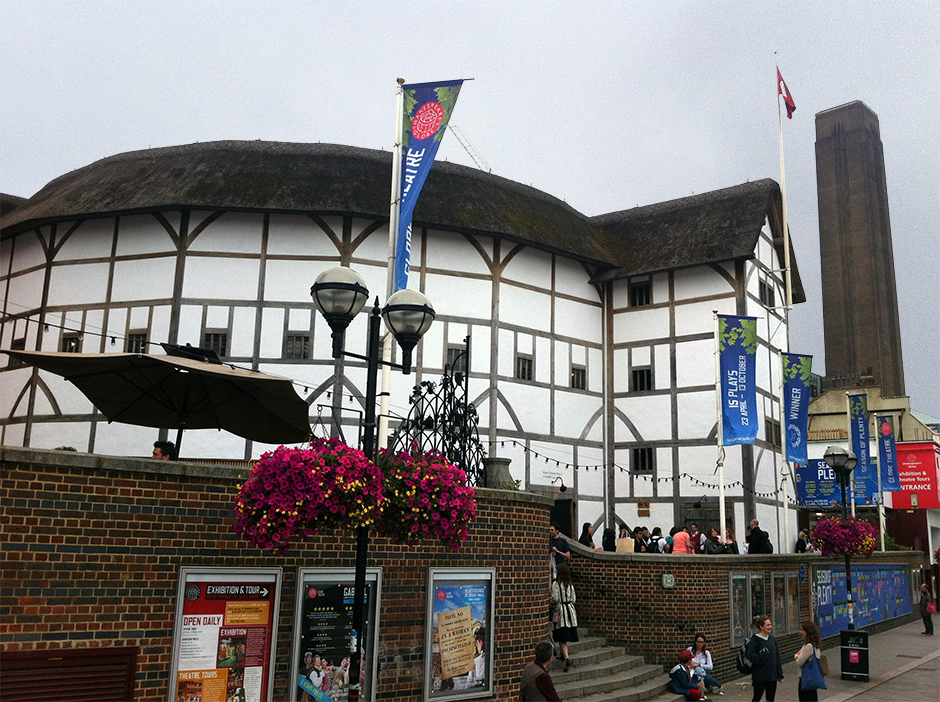 Okay — first of all, it’s technically not Shakespeare’s theater. As anyone who has seen Shakespeare in Love can attest, the theater was actually under the management of shareholders—most famously the Burbage brothers. The play company that Shakespeare worked for, however, used the Globe for its productions. The Globe today is famous for its architectural design: three stories in a circular, open-air amphitheater. Actors use the whole building as a stage.

On the ground level, the Globe originally sold standing-room spots to watch the plays for a single pence. This was meant to allow just about anyone the opportunity to see plays. Today, those same spots are sold for just £5. Naturally, those are the tickets I booked when visiting last month.

The current Globe Theater is, perhaps obviously, not the same one during Shakespearean times. In the 20th century, the Shakespeare Globe Trust was set up to research, educate and eventually found a new Globe Theater. Today that theatre stands just a few hundred feet from its original 17th century location. While little is known about the historical theater, Shakespeare’s Globe Theater was reconstructed as historically accurate as possible. Situated along the south bank of the Thames, the theater is located in one of my favorite areas of central London. 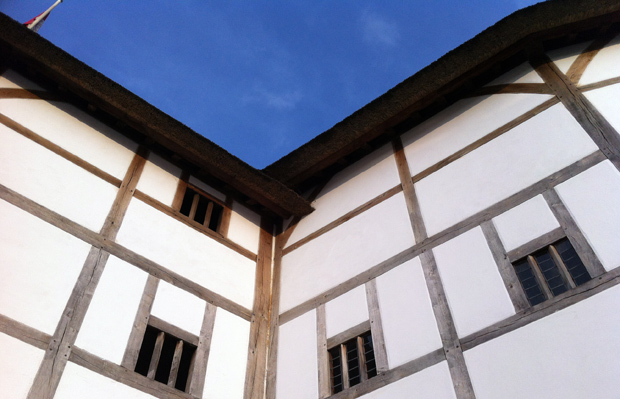 While the site of Shakespeare’s Globe Theater features an education and exhibition center, my real interest for visiting the Globe was to see some Shakespeare, hey. The Theater doesn’t exclusively put on Shakespeare plays, but from talking with one of the ushers, it seems that those are the plays that always bring in sold-out crowds (and tourists like myself). We had booked £5 standing-room only, yard tickets for two different performances during our one-week stay in London: The Tempest and Macbeth.

Having gone without theater for a few months, both were spectacular performances. The Tempest took control of the entire theater, using the balconies and the floor where we were standing to bring characters and props in-and-out of the performance. Seeing The Tempest on a rainy evening, we spent most of the play cold and under rain ponchos. But that only added to the atmosphere.

Impressed by the atmosphere inside the Globe during The Tempest, when we returned two days later to see Macbeth I didn’t really expect things to get better. But they did. The Macbeth performance was especially moving with strong, passionate acting. Lady Macbeth’s character, played by Samantha Spiro, drove me to tears.

Tips for Viewing from the Yard

BOOK TICKETS EARLY — If you plan to visit the Globe Theater during your stay in London, make sure to book tickets in advance. We booked online, paying an extra £2.50 to reserve “seats,” but otherwise it would’ve been nearly impossible to get such cheap tickets at the last minute.

SEE IT FROM THE YARD — Seeing Shakespeare from the yard was definitely a highlight of the experience. Admittedly, my feet were tired from so much walking around London and then standing during a 4-hour play, but thankfully there’s an intermission.

BRING YOUR OWN DRINKS — Food and drinks can be pre-ordered before the show and picked up during intermission, which we took advantage of. Prices were fair and the burger I had was convenient and tasty. Definitely recommended especially because the plays seem to coincide inconveniently with dinner time. The theater staff also didn’t seem to be bothered by people bringing in their own drinks (plastic only), which was a pleasant surprise. We arrived to the Globe after a full day of sightseeing with all of our daytime tourist gear (water bottles, cameras, sweaters, guidebooks), so we were thankful to not have to bother checking our bag or leaving things behind.

BE PREPARED FOR ANY WEATHER — Performances go on regardless of the weather (rain or shine), and you’re completely exposed in the yard, so bring a poncho (or purchase one there for £2) to be prepared. Umbrellas aren’t allowed; can you imagine the obstructed views?!

DON’T BE AFRAID TO MOVE AROUND — After chit-chatting with one of the ushers in the yard, we learned the most important tip for enjoying the theater. Because it’s standing-room and there are no assigned seats, you have the chance to view the stage from whichever angle you please. Our usher friend even suggested moving around during the performance. We watched Macbeth from center stage and then later from stage left. Not only were our views different, but the audience we were surrounded by changed as well. It made the whole experience that much more memorable.

London theater tickets for Shakespeare’s Globe can be booked directly on the Globe website: tickets.shakespearesglobe.com