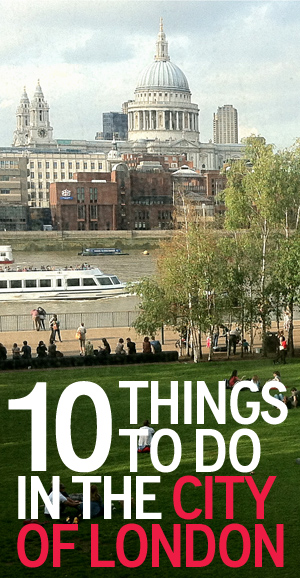 When we booked our holiday apartment in London, we found ourselves located pretty much in the centre of London. I was a bit hesitant when initially choosing the place to stay, simply because I know the City of London (that’s the name of the central London neighborhood) is the business centre of the capital city. “Business centre” is the type of neighborhood I usually want to be farthest from, but as it turns out, it’s actually quite a good location to be based in while in London.

Most London hotels are in prettier and far more beautiful neighborhoods of London. But the City of London is home to so many of the main tourist attractions, so it made for a convenient location on a short trip. Thankfully there were plenty of things to do within walking distance, and with the convenience of the London Underground and the bus system, we were near enough to the (surprisingly close) trendy East London neighborhood, as well as the more commercial and touristic areas elsewhere in central London.

If you’re looking for an apartment stay in London during a short city trip, being in the City of London can’t be more convenient.

Our apartment was just steps away from the Monument—a column commemorating the Great Fire of London in 1666. Within walking distance, all of the following things to see were no further than a ten to fifteen minute walk. I’m sure there’s actually more to discover in the neighborhood, but this top ten list of things to do should be enough to keep you covered for most 2 or 3-day trips to the City.

GoWithOh.com is an apartment rental website where you can find hundreds of apartment listings in London and elsewhere throughout Europe.

One of London’s most iconic buildings (and trust me—there are many!), St. Paul’s Cathedral is as beautiful on the outside as it is on the inside. The Baroque cathedral dates back centuries and its famous dome provides a dramatic view over London.

Cost to entry isn’t cheap (£18 adults; £16 students) so if you want to splurge and have a particular passion for cathedrals, spend a few hours at St Paul’s. Otherwise, enjoy a picnic lunch in the churchyard gardens and just make sure you snap a pic from the Millennium Bridge.

The View From the London Monument

Perhaps the cheapest view of London from above (if you can handle the 311 steps up) the view from the Monument is one of London’s best. Erected by famous London architect Sir Christopher Wren, it’s the tallest isolated stone column in the world and was built in 1677—just 11 years after the fire destroyed so much of the city. The Monument is located just steps way from where the Great Fire of 1666 is believed to have started—famously caused by a spark in a baker’s shop on Pudding Lane.

The claustrophobic climb isn’t for the faint-of-heart. But trust me—when you make it to the top and see the light, it’s a view worth climbing for. Entry to the Monument is affordable (£4.50 adults; £3 students; more information here) and convenient. Just bring your hiking shoes.

London Bridge is probably not what you think it is. When many think of London Bridge, they’re actually picturing Tower Bridge (see below). London Bridge is actually quite boring, but it’s conveniently located and connects the City of London to Southwark on the other side of the Thames River. While the bridge’s architecture and design is nothing to write home about, its’ story is quite funny.

The current location of London Bridge has been home to various bridges over time — many have been destroyed by the ravages of time, fire and war. So, in 1967 when the London Bridge needed repairs, the City of London decided to sell off the bridge before replacing it. As the story goes, an American businessman purchased London Bridge at the time, thinking that it was actually the significantly more iconic London Bridge. London Bridge was shipped overseas and now sits in a small town in Arizona.

On the Southwark side of London Bridge you’ll find several great tourist sites to visit. Borough Market, Southwark Cathedral and the Queens Walk are all places worth seeing.

Arguably one of London’s best markets, the Borough Market operates every day but Sundays during lunchtime and is home to some of London’s best street food operators and cheap eats. Students flock here for the good deals (expect to pay £3-£7 for a hearty lunch), and celebrities stop by on occasion. (Jude Law was rumored to have been spotted among the food stalls just a few days before my visit.)

Food stalls at Borough Market range from traditional English foods (meat pies!) to Indian curries, vegan and vegetarian options, greasy burgers and of course fish & chips. There are a few food tours through the market, but you might also consider joining a Harry Potter themed tour with MuggleTours.co.uk which starts here and walks you through notable scenes and spots of inspiration from the books & movies.

This complex structure is everything and nothing at once. The multipurpose Barbican Centre includes the Museum of London where you can learn more about the first days of this global metropolis—its fires and its plagues. The entire centre stands as a once perfect solution for a real state crisis. The brutalist architecture mixes fluid and solid forms, satisfying both the housing needs of London’s many citizens while providing food for the soul; libraries, workshops, cinemas and more are hidden in the Barbican core.

Some remnants of the ancient London Wall can even be spotted if you know where to look. Get lost in this architectural monster (trust me—it’s easy) and imagine how your life would be if you were one of the residents of this symmetrical nightmare. It’s a love it or hate it relationship. Guess how I feel.

The site of some rather grisly tales from the British monarchy, the Tower of London is also one of the world’s longest running tourist attractions. Throughout it’s thousand-year history, the Tower of London has been used as a royal residence, an armory, a treasury, a zoo and the Royal Mint.

Today if you visit, you can get a glimpse of the Crown Jewels if you’re willing to splurge on a ticket (£25 adults; £19.50 students). Look out for special exhibitions about British Monarchy history.

London’s most iconic bridge (though the newer Millennium Bridge could probably give it a run for its’ money), Tower Bridge is often referred to as London Bridge. The short and stubby bridge connects the Tower of London with the southern side of the Thames, but makes for some great photography.

It’s possible to visit the Tower Bridge Exhibition and get some decent panoramic views of London for under a tenner (£8 adults; £5.65 students; joint tickets available at discount with London Monument). There are so many things to do in London, but if one thing you’re almost certain to do is get a photo of Tower Bridge—try to get one from the popular Queen’s Walk promenade along the southern side of the Thames. And for a truly special London experience, check the Tower Bridge’s official website (below) to find out the bridge lift times.

Probably one of the most important art institutions in our world, the Tate Modern has a well deserved reputation. Surprising you with both its permanent and temporary exhibitions, the major goal when you visit it is to challenge your perceptions of aesthetics and beauty. Is this art? Or not? It doesn’t really matter.

If you get tired and need a rest from the Mondrian’s and Lichtenstein’s, then go to the store and check the products or visit the terrace for a lovely view of the Thames flowing by. As the entrance is free for everyone (the museums work mostly on donations), be generous. Art needs a place to sleep…or maybe to dream. The Tate Modern gallery is open every day, from 10 to 18 o’clock, except Fridays and Saturdays when you can hang around until 22:00.

No matter if you prefer to stand like the people or sit like the nobles did centuries ago, the Globe Theatre will enchant you. The performances are simply superb. How much time do these artists need to learn their lines, to move so soft? Book in advance if you want to be certain you’ll get a place.

Related: Shakespeare in London – In the Yard at Globe Theatre

On stage, the usual: Laughs, cries, blood, wine and human nature. Actors screaming from above, ships moving at your side, the magic of theatre is everywhere. And if Shakespeare did his part writing these wonderful plays—and here we are ignoring all the debate about his writing—the staff would do its best to protect you from the rain, to have your food and drink ready for the intermission (preorder is amazing) and to welcome you with a smile. Sound good? Well, then be sure to visit in the summer. No winter performances. Tickets are from £5 to £39.

For those into the darker side of history, a visit to London’s Clink Prison Museum is a good place to start. One of England’s oldest prisons, it was the site of countless tortures since it’s operation in the 12th century. The prison was so notorious in its heyday, that it’s now become part of our everyday vernacular to refer to prisons as “the clink.”

Visits to the museum are relatively affordable (£7.50 adults; £5.50 students). Inside you’ll find torture equipment and educational guides about former prisoners and what it was like inside the prison.

How to Get to London

Dohop.com is a flight, car rental and hotel search engine. I’ve been using them to look for cheap flights for about a year and they often bring up great deals I haven’t found elsewhere. Based in Europe, they’re a great resource for London, the UK and Europe whether you’re looking for hotels, car rentals or flights. Try a search and see for yourself!