Like a fair few of you, I’m a bit of a book nerd. And as the luck of my age would have it, I grew up with the Harry Potter book series. I won’t even lie to you: Harry Potter has been a big part of my life. From working five years in a bookstore (again, as luck would have it…I worked there during several Harry Potter book releases) to midnight movie screenings, JK Rowling’s fantasy world is one close to my heart.

As you’re probably aware, JK Rowling set more than a few scenes from the series in London. It’s also distinctly a British book with occasional colloquialisms—things that sometimes went over my head as an American. So from the very beginning, I’ve always associated Harry Potter with London. And as I would find out on my Harry Potter themed tour with Muggle Tours, much of that association is by design. 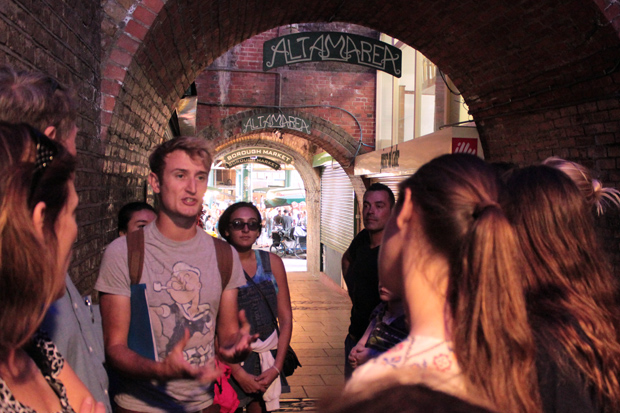 My tour guide, Adam, telling us about Harry Potter and the Southbank neighbourhood

I wasn’t originally planning to take a Harry Potter tour in London. In fact I never even knew such a thing existed! But when researching for tours in London, I stumbled on Muggle Tours and then I just knew it was something I’d have to do for myself. At £12 per person, it’s not a bad price for a speciality walking tour.

The tour started near Borough Market, which I’d only recently discovered because it was so near to where I was staying. The beauty of this walking tour is that it covers an assortment of London sightseeing destinations, but through the lens of Harry Potter (both the books and the films). Wandering through the Southwark Borough of London along the Thames South Bank, our guide Adam pointed out all sorts of sites and attractions. We learned about historic London from typical sightseeing stops near London Bridge and The Clink, as well as more modern-day aspects of typical London life and how it all shows up in the Harry Potter books and films—whether as inspiration for a particular setting or maybe a backdrop in one of the films.

For example, in the Borough Market, our guide pointed out how it was a popular place for cheap eats, but then also pointed out the flower shop Chez Michele. The shopfront was used as a film location for “The Leaky Cauldron” in one of the Harry Potter films. The mix and match between reality and fantasy, of old and new London, was a regular theme of the tour.

While the tour started in Southbank, we eventually made our way to Westminster. And while normally a metro ride in the middle of a walking tour can be disruptive, this one actually made sense. Because one of the tube stations we went through was actually a scene in one of the films. Which brings me to one of the more interesting aspects I learned about Harry Potter in London. Throughout the tour, our guide explained how the directors and writers were keen to make the films as believable as possible. JK Rowling managed to successfully create an entire world built underneath an already existent reality—and in the films, they were keen to mimic this atmosphere. Sure there are magic and spells in Harry Potter, but there are also traffic jams and tube stations.

For anyone paying attention to the films, the film locations were purposely put in realistic neighborhoods of London—because many were actually real! Southbank, being a bit of a dark and dirty area in its medieval history, was a prime location for some of the darker and dirtier scenes. In Westminster, the actual UK government offices are in just about every other building, so it’s only natural that JK Rowling’s fictional Ministry of Magic would be located nearby. Naturally, our guide told us, that’s why the film producers used buildings and settings from Westminster in film scenes—because that’s how it would actually be if the world of Harry Potter was actually real!

Overall I found the tour to be interesting and informative—and a good way to explore London for a few hours. Our group was a mix of young adults and families with small children. The guide I had, Adam, was friendly and personable (he’s an actor, so it’s not surprising!) and he went out of his way to make the tour interactive. Asking trivia questions and trying to get the kids talking. While some of the stops on the tour may have seemed a bit of a stretch with their Harry Potter connections, there was almost always a silver lining—interesting tidbit facts about JK Rowling’s influences or something new to learn about London today. If you’re a Harry Potter geek like myself (did I mention I have a Harry Potter-themed tattoo?), this is a good walking tour to get a sample of London’s most touristic neighborhood (Westminster) and central London’s most scenic neighborhood (Southwark). And all with a healthy dose of talk about wizards, witches and magical spells! 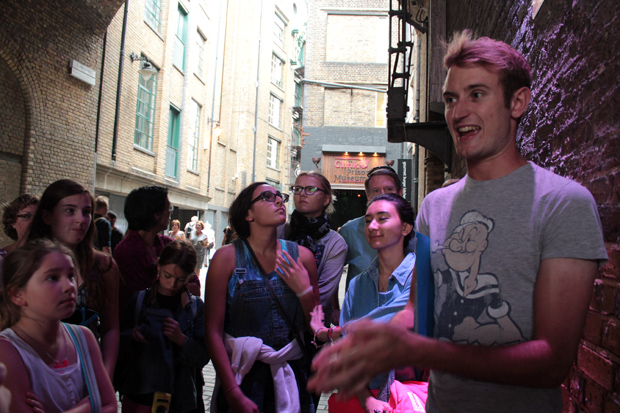 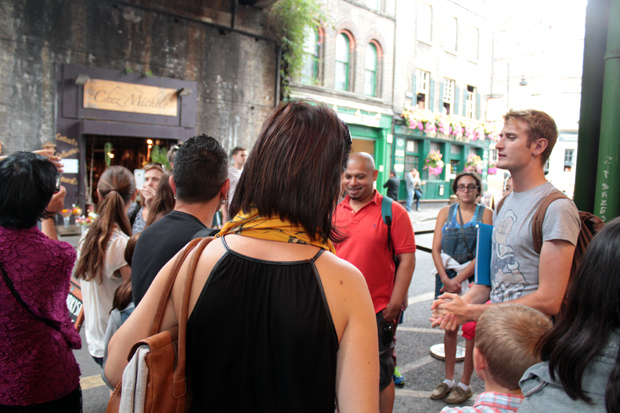 At Borough Market, the Chez Michelle shopfront was used as a film location 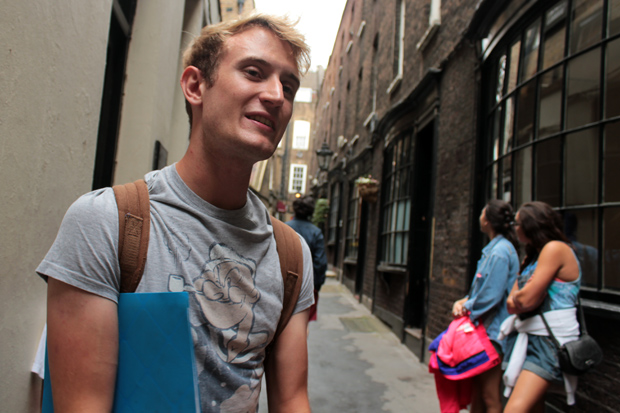 Near Trafalgar Square, our guide tells us about this little street which served as the inspiration for Knockturn Alley 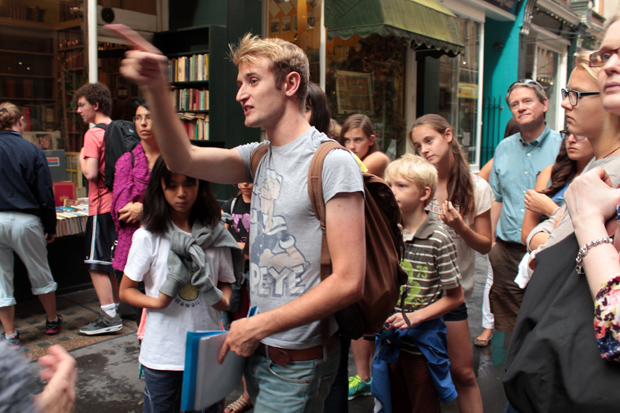 Just across the street from Knockturn Alley, our guide points out what JK Rowling has said to be one of her favorite streets in all of London—which coincidentally served as an inspiration for the Diagon Alley film location