Hebrew Words for Travelers in Israel

A fun guide to some of the more useful (and some less useful) Hebrew words and phrases for travelers to Israel. 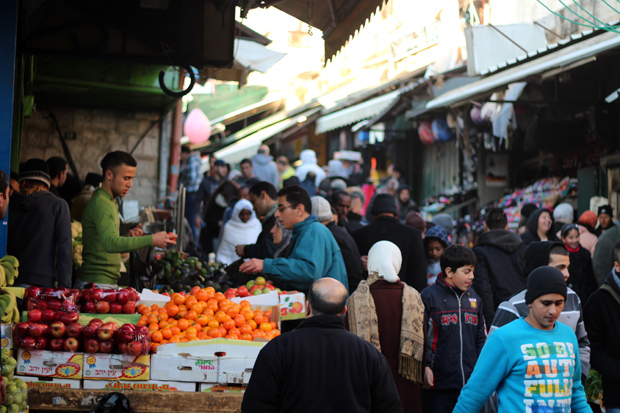 Okay, so I’ve already shared plenty of tips on my favorite things to do and places to see in Israel, but one of the things I haven’t covered is the language. The very first time I traveled to Israel, I quickly become fascinated with the language. But not in such a positive way. Israel has two official languages: Hebrew and Arabic. The sounds are similar, both read right-to-left, but if you look at the letters, the two languages appear quite different. That’s because Hebrew uses block letters and Arabic uses script. If you look at many (but strangely not all) of the street signs in Tel Aviv, you’ll quickly notice the complications of a country with two languages. 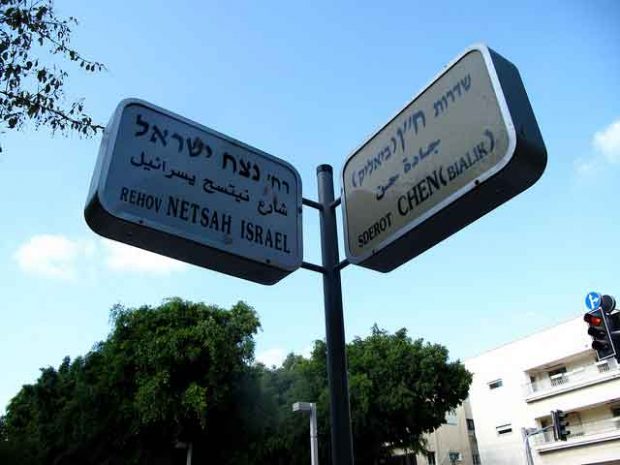 And honestly, if you ask me, the Arabic script is strangely beautiful while the Hebrew letters come across as big and clunky. In speech, I always preferred the sound of Arabic over Hebrew. But in Tel Aviv, you’ll find Hebrew to be the go-to language. Also important to note is that just about everyone in Israel and even Palestine speak perfectly fine English. In Israel it’s even highly likely that the Israelis you might be speaking to are actually American—ones who’ve made Aliyah. Made what now?! Yeah, that’s what I felt the first time I heard the phrase in Israel. That’s why below you’ll find a random selection of the Hebrew words and phrases that you’re likely to come across. I’ve tried to simply share their meanings but with some helpful tips on how and why you might have to use these Hebrew words.

So with Hebrew being a different alphabet and all, there are some English-ified words based on pronunciation. That’s what you see below.

Shalom
Literally means “peace” and if you learn one word to use in Israel, make it this one. Used for hellos and goodbyes, and plenty of other uses in between.

Sababa
Alright, this is your basic “cool”, “great”, “alright”. A word to use whenever you really feel like. I essentially see its’ use as similar to awesome in USA English. Want to go to the beach? Sababa. Want to ride bikes? Sababa. Want to make out on the roof? Sababa.

Beseder
When awesome is too much, but you don’t want to turn down that make-out session. This is a more neutral word for “let’s do this. Okay, everything’s in order.

Ma nishmá
What’s up? Friendly way of asking friends “do you want to go to the beach and have a good time, maybe buy some cheap beers and make up funny stories about the tourists on the beach?” Also related: Ma koreh (what’s happening?)

Toda (also Toda Raba)
Thanks and “Thanks a lot!” This is a fun word to say because it sounds like you’re a 5-year-old who’s just finished a dance recital. Ta-da!

Be te’avon
If you like to eat, you’ll learn this one quick. It’s Hebrew for Bon Apetit!

L’chaim
The toast/cheers when you clink beer glasses, it translates “to life!”

Bevakasha
Spend enough time around Israelis and you might quickly discover an innate sense of brusqueness. But that doesn’t mean they avoid basic manners. Bevakasha is the Hebrew word for please.

Slicha
Lest you forget you’re in the Middle East, learn slicha early in your trip. It’s Hebrew for excuse me or sorry! You’ll use it when cutting in front of people in queues, when brushing past them on the crowded Tel Aviv boulevards, and when climbing over other passengers in the Israel public transport.

Tov
When something goes well, say tov — it’s Hebrew for “good” and has plenty of uses in everyday conversations.

Lehitra’ot
See you / bye. As in adios, amigo!

Nachon
Like the Hebrew word tov, nachon has plenty of uses. It could translate as “right” or “correct”, but in a friendly, casual way, usually in reply to a new friend’s ridiculous suggestion. Person A: Let’s get some hash and go to a rave in the desert! Person B: Nachon. 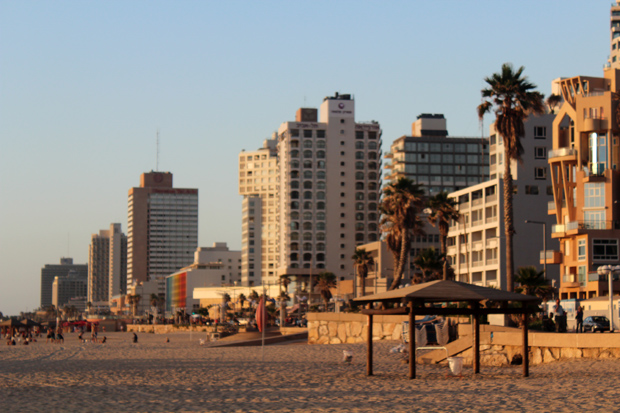 Ach shely (or Achi)
In American frats you’ve got “brah”, and in Israel, you’ve got ach shely. Roughly translates as “My Brother” (or Brother).

Arsim (or Ars)
There are chavs in England, bogans in Australia, douchebag gangsters & white trash in America and arsim in Israel. Like obscenity, you’ll know it when you see it.

Gever
Slang for man, for when you’re just not already enough of a machismo.

Other Words Worth Knowing for Travel Within Israel

Shabbat (also Shabbos)
The Jewish holy day, if you’re in Israel on a Friday evening, you’ll have plenty of opportunities to learn about Shabbat. If you ask around, I’m sure you could get invited to a Shabbat dinner. And if you do, then you’ll need to know the next Hebrew phrase…

Shekel
That’s the currency. It’s a fun word, don’t you think? Good luck figuring out the conversion. It’s always been at an odd amount when I visited, which makes quick conversions in my head rather difficult.

Kibbutz
One of those unusual, quirky things you’ll only find in Israel, a Kibbutz is historically a collective community based around the Utopian ideals of harmonious living. Farming is often essential to the success of a Kibbutz and you’ll find them scattered throughout Israel’s countryside. Many are home to great restaurants and cafes, or even strange amusements like an ostrich farm (one I went to near the Sea of Galille). It’s possible to volunteer at a Kibbutz where you work for your room & board (plus a small salary) but it typically requires a minimum 3-month contract. So if you’re on a short trip, it’s possible to visit independently or on day trips & tours from Jerusalem.

Birthright
This isn’t a Hebrew word, but it’s a thing worth knowing about it depending upon when you visit. The Birthright program is a program set up for young Jews around the world (famously America) to come to Israel. Essentially if you can prove you’re Jewish (which can be rather complicated), this association offers you a 10-day, all-expenses paid trip around Israel. Thousands of Birthright tourists arrive every year, most commonly in the summer, but also in December and January. The program allows applicants from 18-26 and has several restrictions. If you’re just a tourist yourself in Israel, you’ll likely bump into a Birthright group or two—they’re hard to miss. (Note: I’ve never taken a Birthright trip myself, but they’re nearly impossible to miss.)

Making Aliyah
If you run into enough Birthright tours in Israel, then this is a phrase you might hear a lot. Making Aliyah refers to the process of immigration to Israel for Jews. As a relatively small country, Israel provides citizenship to Jews around the world. There’s a lot that goes into this subject, and nothing I really care to talk about — but knowing the fact that if someone says they’re “considering making Aliyah” — just know that it means they’re considering immigrating to Israel.

Zionism
Yeah that’s a big, loaded word, right there. Zionism is essentially Jewish nationalism for a Jewish state in what is Israel today. Zionists typically believe that they should immigrate to the Jewish homeland. For better or worse, it’s a word you should probably be aware of when traveling in Israel. There are whole books on the history of Zionism as well as critics and supporters of the movement & ideology.

Did you enjoy this post on useful Hebrew words and phrases? How do you find using the language when traveling in Israel?

Ed: Note the first edition of this guide mistakenly left out the word used when clinking beer glasses.