Recently I realized if I were to call Berlin my home, I really should discover more to the city. You see, there are so many people coming and going through the city, but I so want to be one of those that stays put. I love to travel, but I think I love Berlin more. So with a renewed interest in discovering Berlin, I was invited to take a tour with David from The Hidden Path.

The Hidden Path consists of three native Berliners, who are friends and study art or graphic design. Compared to other “alternative Berlin” companies, their tours are the real deal. Tour groups are small (2 – 8 people) and show off Berlin’s coolest stuff: the city’s original street art and its sustainability projects.

What I loved most about the tour was my guide’s personal stories about his experience in Berlin. Obviously knowledgable about Berlin’s history with street art (David’s a native Berliner, naturally), he seemed to have first-hand knowledge about many of the city’s most famous street artists & graffiti writers.

The tour began in Rosenthaler Platz — a favorite area of mine with many bars & cheap eats. Just around the corner, on a street I’d never made it down before, David pointed out a former squat and started with a history of Berlin’s street art. Touring Mitte, we stopped at an art gallery and bookshop — hangouts popular with Berlin’s creative class.

Along the way David pointed out several notable Berlin street art — works by Alias, Prost and new paste-ups by JR. Because we were on bike, we were able to quickly make our way to Kreuzberg where we learned about several large-murals. These were fairly large murals that I’d either never noticed or seen before (including the one by Blu below).

What was most interesting for me on this unique Berlin tour was being able to learn more about the city’s untold history. Other tours gloss over the alternative aspects of Berlin, but David from The Hidden Path embraces it. While I took the street art tour, the sustainability tour offered is certainly unique among Berlin’s many tours.

View a few photos from my tour below, and then be sure to put The Hidden Path’s Berlin tours on your itinerary! 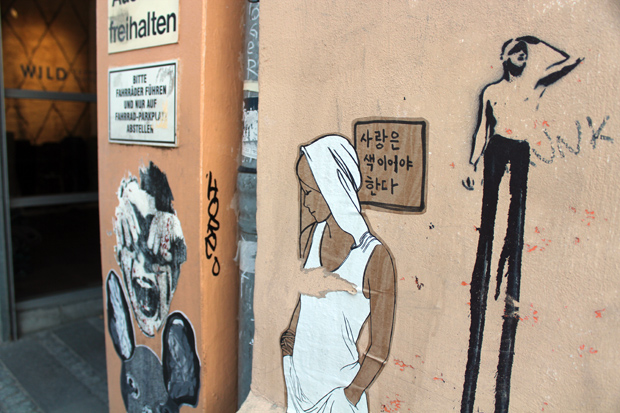