Road Tripping in Illinois - The Highlights

Earlier this month I visited Chicago and northern Illinois on a road trip. The goal was to experience a bit of Americana—those things so typically American, so typically traditional of one of the world’s largest countries. Road tripping with Illinois Tourism through “the heartland” of the USA, my personal plans for the trip were what you might consider basic: eat, drink, take pictures and enjoy—but the trip turned out to be much more surprising.

On the road from Chicago, northern Illinois proved to be much more interesting than expected. During other road trips I’ve taken through the state (to visit friends at colleges across the midwest), there were always lots of cornfields and long, monotonous, flat roads. This time, though, exploring the northern part of the state from Chicago and Lake Michigan all the way to Iowa & Wisconsin, the terrain was different and the stopover cities were more interesting. Illinois is a surprisingly diverse and interesting part of America—a true melting pot of cultures, U.S. history and contemporary trends. 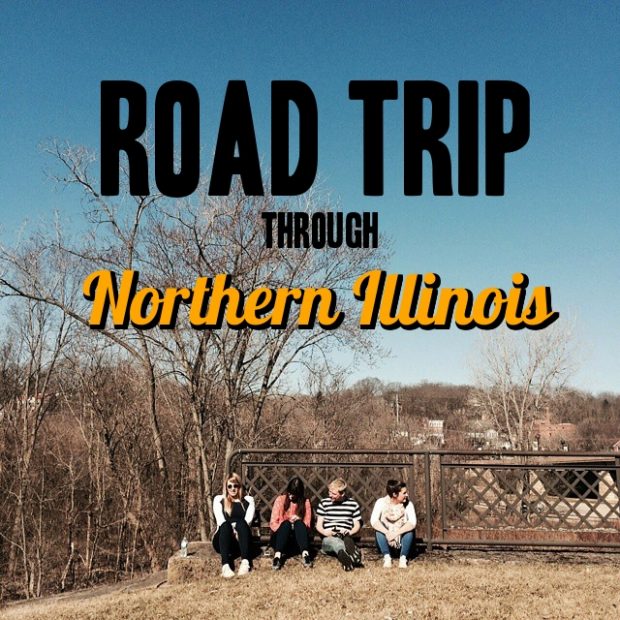 My one-week holiday in Illinois began in Chicago—a city I’ve always enjoyed traveling to on more “accidental” visits, but now sits right up there as one of my favorite American cities. There’s something special about such a large city (almost 10 million people in the metropolitan area) but one that maintains that midwestern friendliness so wonderfully stereotypical of the region.

Any road trip through the midwest is likely going to include stops along America’s most famous road: Route 66. But the road actually begins right in the center of Chicago. And, in typical American fashion, it begins just steps away from a diner. Not just any diner, though. This is Lou Mitchell’s.

It’s an American institution. When entering Lou Mitchell’s, you’re likely to be greeted with a donut hole and also a small box of Milk Duds. The friendliness (and food portions!) at this diner just never stops!

For those looking to quickly get out of the “big city” and head to nature, there doesn’t seem to be a better spot than Starved Rock State Park and its surrounds. Just a short drive from Chicago (under two hours, even—easy to do on a day trip), it’s a nice escape from the city. The State Park features several different hiking trails, a trolley tour and more than a few scenic viewpoints. The Lodge, though, is where I spent most of my time. The friendly bar staff in the restaurant (with a outdoor patio looking out over the bluffs and river below) made it an easy escape from the city.

While most people visit Utica and the surrounding area (including the nearby city of La Salle) for the state park, there are enough other things to do in the area. Personally, I loved the wine tasting experience at the August Hill Winery. Some of their wines are available in Chicago, but my favorite was one called Bride of Freak of Nature—a bubbly infused with Oolong tea. It sounds weird, I know, but it’s so, so good!

For the tourists, the Hegeler Carus Mansion is a private homestead turned into a restoration project. The home was built in the 19th century by the same architect of several prominent buildings elsewhere in Illinois (namely their state capitol building), but what was most interesting was the home’s historical owners: the Hegeler & Carus families. They founded a publishing house which promoted philosophy, science and religion—often intersecting the diverse disciplines, most notably in Paul Carus’ somewhat controversial Gospel of Buddha. The house also features what is considered to be the world’s first indoor home gym (though I don’t know if I’d trust the climbing rope today). It’s a unique little stop for a bit of weird history out of Illinois’ past.

Utica and the nearby La Salle are a nice escape from the busy city life. With a handful of tourist attractions, it’s no wonder so many Chicagoans escape here for the occasional weekend break.

Just minutes away from both Iowa and Wisconsin, the small town of Galena has established itself as a tourist destination for much of the midwest. It’s funny how many people talk about Galena — considering it’s a city with a population just over 3,000. And yet, the city’s picturesque Main Street and the many historical and unique tourist attractions make it one of the best weekend getaways I’ve experienced in rural America. Many regional bands stop over in Galena to play at the legendary Miss Kitty’s Grape Escape. Couples come for romantic getaways (and even destination weddings) and others, like me, are just looking for a bit of Americana. Galena serves it all up with a bit of style and freshness.

But don’t think just because you’re visiting “small town America,” there’ll just be the stereotypical things to do. Oh no! The bed and breakfasts here are all creative and cater to diverse clients. The city is also home to German restaurants, hipster cocktail bars of the same ilk you’d find in Chicago, a craft whiskey distillery (serving a popular moonshine) plus all that usual American history stuff. Throw in a pretty backdrop along the Galena River and some scenic viewpoints and this is a city you just can’t miss when driving through middle America.

I can’t stop broadcasting what a special place Galena is. You might think it’s just a small town, but there’s so much more to this undiscovered destination…

Rockford is a bigger city, one that’s hard to miss when driving through northern Illinois. The city hosts a number of different events and conferences throughout the year, but there are plenty of reasons to visit as a tourist. I won’t lie… I specifically wanted to visit Rockford for one reason and one reason only: the sock monkey.

Not many people know this, but the symbol of American kitsch (the sock monkey, clearly), was invented and first produced in Rockford thanks to a Swedish immigrant who made red-heeled socks without seems—perfect for making sock monkeys! The city is now home to a historical museum which features a small exhibition on this history, as well as other cultural contributions to the city’s history. The sock monkey exhibition was a bit disappointing, to be honest, though the gift shop had a decent range of sock monkeys available for sale (I couldn’t help myself).

The city has more than just American kitsch, though. There’s also a riverside brewery, Rockford Brewing Company, with a nice selection of local, craft beers available in their restaurant—and in the summertime, plenty of public events.

There’s also the Burpee Museum of Natural History (ignore the name, it sounds silly) where you’ll find two truly impressive dinosaur fossils: a young T-rex (Jane) and also a near complete Triceratops fossil (Homer). Both are strangely impressive, as anyone who has visited Sue in Chicago’s Field Museum might attest. Stumbling upon these in a small but surprising museum makes it all the more surreal—there were dinosaurs wandering around America at one point (these two particular fossils come from Montana). Next door to the natural history museum is another cultural institution: the Rockford Art Museum which, though small, manages to put on some impressive contemporary art collections.

Rockford is also home to one of Frank Lloyd Wright’s houses. As a bit of an #architecturenerd, I made a point to visit the Laurent House—important because it was the only home Wright agreed to build for a physically disabled client. There are a lot of interesting design quirks in the house, plus the typical FLW style—look out for a photo essay on that soon. Entrance to the house is pretty particular; check their website for available tours ($15 admission).

To see more of Illinois beyond the places mentioned above, take a look at these pictures over on the Expedia Viewfinder gallery—everything from the Anderson Japanese Gardens in Rockford to Sue (the dinosaur) in Chicago!