Meat and Potatoes Dishes from 14 Different Cities Around the World

One of the best parts about traveling to a new city is trying the new cuisine – no surprise there. But sometimes finding that iconic meal from a particular city can be challenging. Everyone’s got their own recommendation on what to eat and where to find it. But that’s part of the charm of being a “culinary tourist.” Below are some of my favorite local dishes from 14 different cities from around the world, collected in partnership with Dohop.com and UK-based illustrator Edward McGowan.

With Dohop, you can search for flights and hotels, often at the best prices available. Try Dohop.com to find flights to each of these cities if you’re feeling hungry ;-) 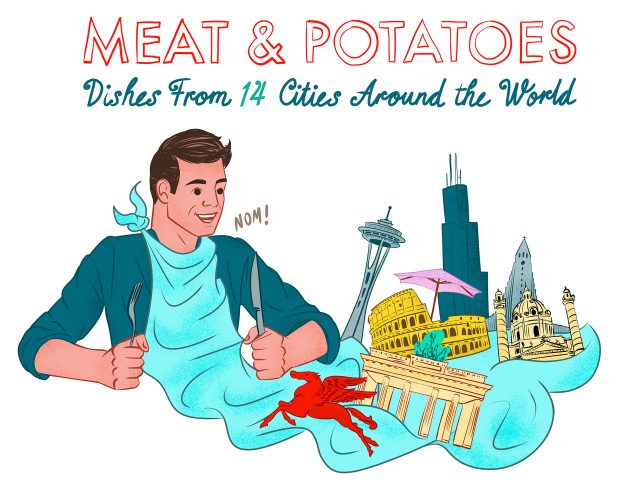 Meat and Potatoes
Iconic Foods from 14 Cities Around the World 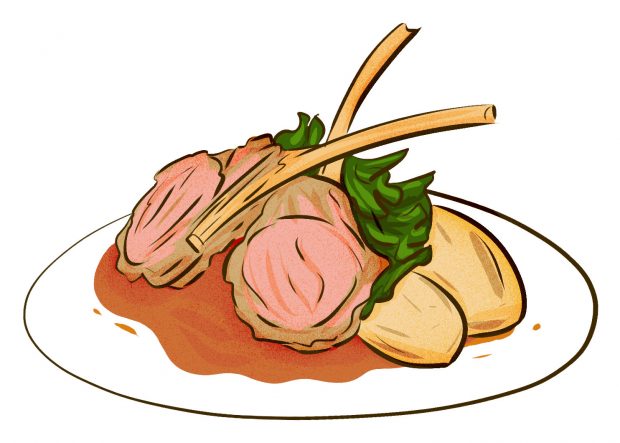 I first tried this dish on my most recent trip to Rome. Everyone always assumes Italian food is all about cheeses and pastas and tomatoes, but there’s actually so much more to the local cuisine. Sure, pizza is widely available, but Italian food has much more variety than you probably expect. Rome has a bit of a working-class flair to the cuisine, so you’ll find a lot of grilled meat dishes, including this one. Grilled lamb chops (which translates as “burn fingers”) are usually a Sunday meal, or eaten especially during the Easter holiday.

Where to get it: In Rome, sometimes you’ll find it served with another one of the city’s most iconic food dishes: Roman-style artichokes (carciofi alla romana). Try agnello alla scottadito at Hosteria Grappolo D’Oro near Campo de’ Fiori in Rome. 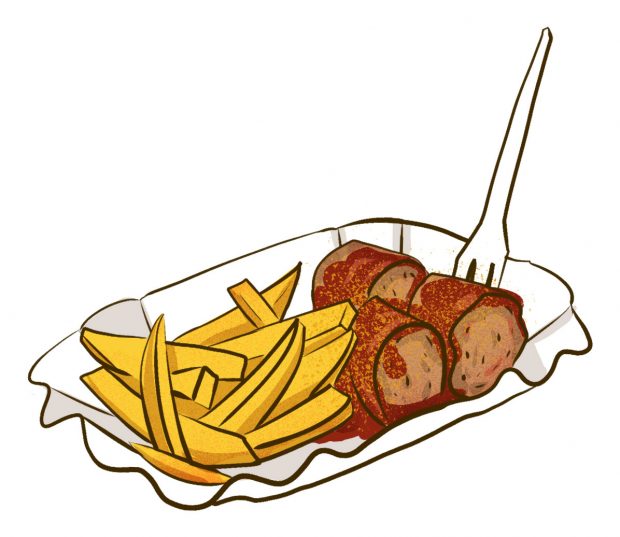 Germany is best known for its sausage and beer, but one of the most iconic meat dishes from the country is currywurst. Hamburg and Berlin both lay claim as the originating city for the dish, which is just as fine because personally I’m not sure why anyone would want to be the proud father of this simple food. Currywurst is a simple sausage served either with or without the skin and then slathered in a curry-ketchup (a spiced ketchup) and usually, for extra measure, a bit more curry powder put on top. It’s not particularly the best food you’ll eat, but it does help cure the late-night munchies after a crazy night out in Hamburg’s Reeperbahn district.

Where to get it: You’ll find it at just about every imbiss fast food stand, but the ones served at Kiez Curry (just off the Reeperbahn) are especially good. It’s pretty much the perfect after-party snack. 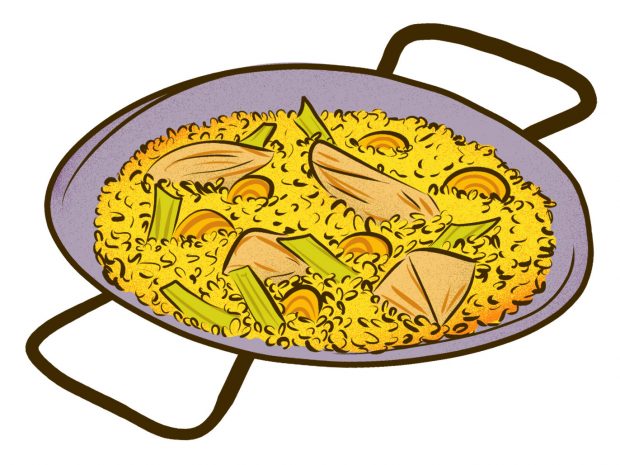 Okay, maybe this isn’t strictly “meat and potatoes” but as Spain’s most iconic food, and one served simultaneously as a meaty and starchy meal. Paella originated in Valencia because of the low-lying rice fields surrounding the city (Spain’s third largest). There are hundreds of varieties, but the most traditional paella in Valencia is one served with chicken, rabbit and land snails. You’ll often find it with seafood varieties as well, but the traditional one is all meat. It’s served in a large skillet, and just like Rome’s iconic meat-and-potato dish, it’s a popular family meal on Sunday afternoons.

Where to get it: In Valencia you’ll find it at many of the traditional restaurants, but you’ll also find cooking schools and food tours offering it as part of a culinary experience. Find out more on the Visit Valencia website, or else try it at the Panorama Restaurant located on the Valencia beach. 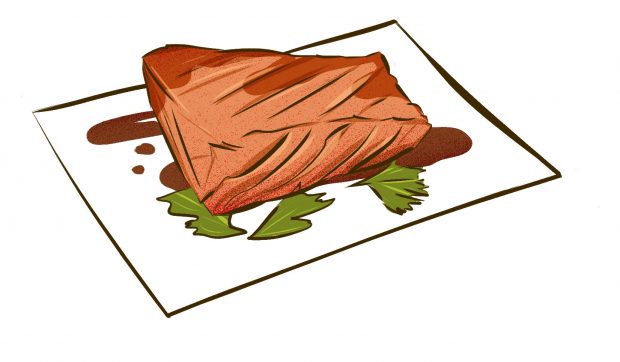 You might think that fish served in a Japanese marinade is about as far away from “meat and potatoes” as you can get. You’d be wrong. Meat and potatoes is a state of mind as much as a meal and for the advanced palettes of the people of Seattle, this is it. In fact, three percent of Seattle area restaurants have “teriyaki” in their name. 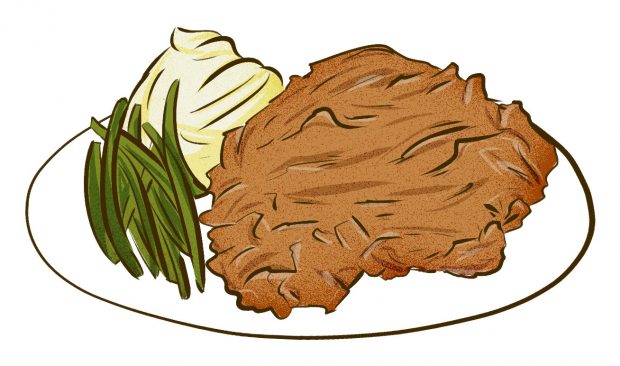 While most tourists come to Dallas-Fort Worth looking for a top-quality steak (which they’ll find, because this is Texas after all), the locals are all eating the actual local traditional steak meal. And it’s fried. There must be hundreds of varieties of this local dish, but the one thing that’s consistent is the fact it must be served with mashed potatoes with country gravy. Country gravy, if you haven’t had it, is absolutely delicious. Creamy and sweet, but chunky with bits of sausage and whole kernels of black pepper, it’s the perfect accent to the meal. But what is chicken-fried steak, you ask? It’s a steak tenderloin that’s pan-fried. You can also find chicken-fried chicken, but that’s basically sacrilege.

Where to get it: As a popular southern USA dish, you’ll find it at roadside diners and small, local restaurants throughout the countryside. But in Dallas, where the culinary scene is flourishing, there are countless varieties. My favorite comes from AllGood Café in Dallas’ hipster neighborhood of Deep Ellum. The restaurant uses local food providers and regularly hosts live music. Go for the Sunday brunch. 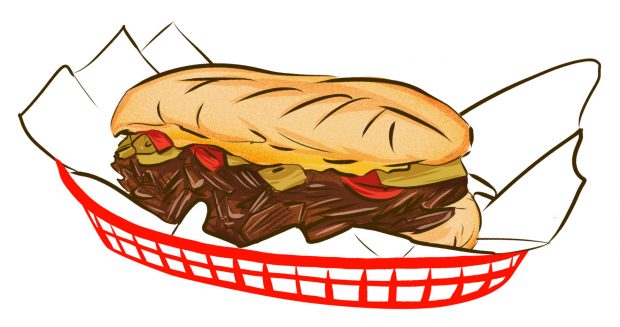 Chicago’s location in the Midwest, the center of the heartland of America, makes it a popular stomping ground for foodies. Chicago’s culinary scene is heavy on the hearty and meaty meals, so it’s no surprise that this is the city where the Italian Beef Sandwich originates. It’s a sandwich made of sliced roast beef dipped (or double-dipped) in their juices, served in bread also dipped in the meat-juice. To top it all off, the sandwich is served with pickled vegetables. Chicago has always been a bit of a messy city with its corrupt politicians so it’s no surprise that their most iconic sandwich is a bit messy, too ;)

Where to get it: Besides the Italian beef sandwich, Chicago is also famous for its countless hot dog stands. You’ll find the sandwich available and the Chicago-style dogs available at most stands and kiosks throughout the city. But the most famous restaurant serving the iconic dish is without question Al’s #1 Beef. 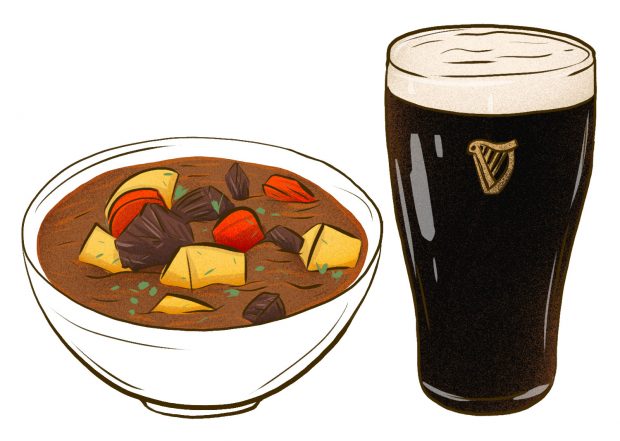 It’s meat and potatoes. Stewed in Guinness! Plus, when you’re in Ireland, it’s basically a legal requirement to drink a Guinness before, during and after your meals. It’s hearty and warm and heavy—the perfect way to bury your feelings when the Irish weather isn’t quite cooperating. And if the Guinness in your hearty stew of beer, beef, bacon, carrots and onions isn’t enough, there’s always the Guinness Storehouse in Dublin where you can take tours and sample even more of the beer.

Where to get it: Go all Irish and make a proper night out in Dublin’s nightlife hotspot area, the neighborhood of Temple Bar. You’ll find hundreds of pubs there and many serve meals during the day and early evening.

No matter that Tel Aviv was recently named the vegetarian and vegan capital of the world, here in the Middle East, shawarma is still king. Middle Eastern shawarma is often lamb, chicken, beef or a mix of them all, that’s roasted all day on a rotating spit and served in a pita sandwich, a laffa (wrap) or on a plate. In Tel Aviv, shawarma is widely available from just about every small restaurant, served with a salad of pickled vegetables.

Where to get it: One of Tel Aviv’s most famous falafel and shawarma stands is Hakosem (corner of Shlomo HaMelekh and King George Street) where you’ll find a line out to the sidewalk no matter what time you show up. The shwarama lasts as long as it does, but the restaurant’s falafel are churned out constantly and even served as free appetizers to guests waiting in line. And if you want to do as the local hipsters do, there’s even a vegetarian shawarma restaurant, Veg Shawarma, located on King George Street that serves tofu and seitan dishes resembling the traditional shawarma. 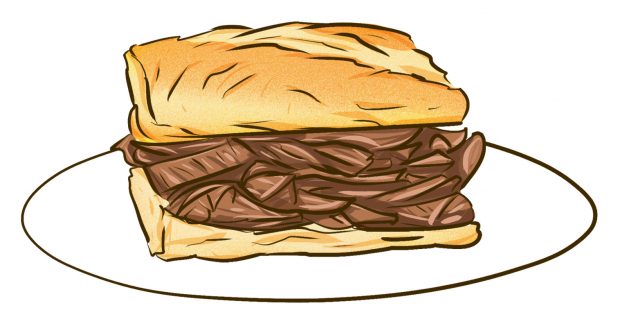 In the American southeastern states, barbecue is taken very seriously. But one dish that’s fairly consistent is the pulled pork sandwich. The meat is slow cooked at low temperatures until it can be pulled off the bone, and then usually scooped onto a bun and served with a side of slaw. North Carolina barbecue style is based around pork dishes and the pulled pork is probably the tastiest of the bunch (or at least my personal favorite). 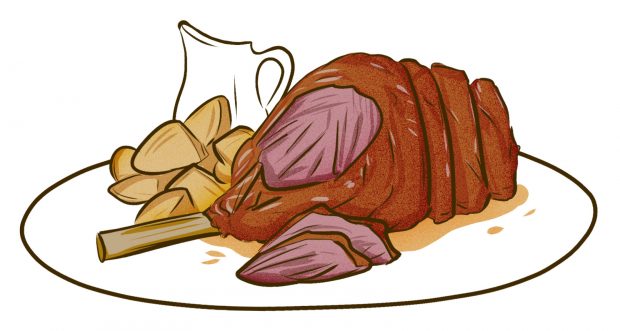 There’s organic free range and then there’s the Icelandic version of organic free range lamb. Almost without fail, Icelandic sheep are set free in spring, literally. They roam around the countryside for the summer, eating grass and herbs in the fresh Icelandic mountain air. When the nights get long again, they are rounded up.

Then all the lambs are killed and their legs roasted with spices and eaten with potatoes. #Iceland 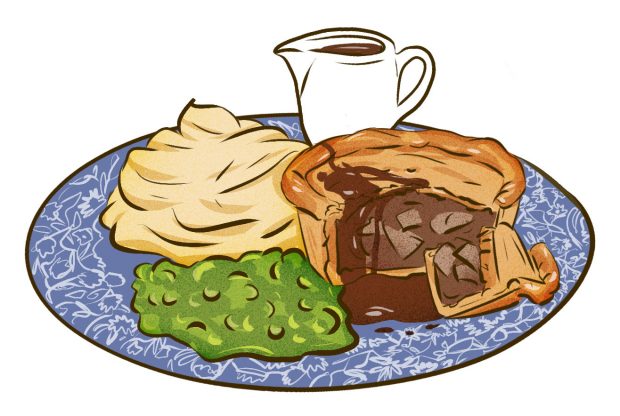 Like Dublin’s Guinness beef stew, this pie is quintessentially Manchester..ish. At heart, it’s simply stewed meat (usually beef) baked into a pie with potatoes, carrots and onions, but it also has a number of varieties including versions with cinnamon, redcurrant and blue cheese. Blasphemy! It’s a traditional working class meal and Manchester is at the heart of working class history in England, especially the now-trendy Northern Quarter. It’s often found in gastropubs or “chippies” (a traditional fish-and-chips, fast food shop) and may be served alongside mashed potatoes or chips—with extra gravy, of course. 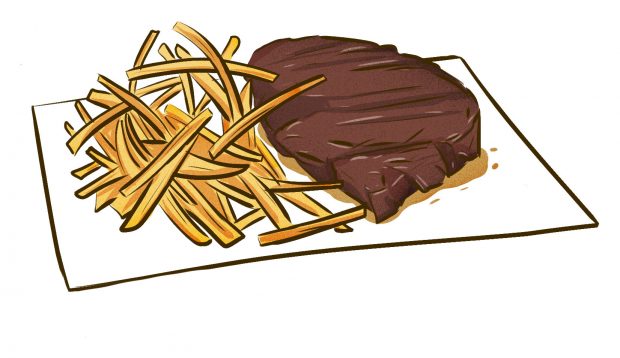 Ah, Belgium. Home of having fries and mayo for dinner. Belgium is also home to steak frites, basically just a steak with fries (Belgium is clearly a nation composed of geniuses.) Brussels‘ version of meat and potatoes is…meat and potatoes, most likely washed down with a big mug of a locally brewed Belgian beer—of which there are many! Thanks to the city’s location at the heart of political Europe (and proximity to France), the city has a rich culinary tradition with quite a few fancy restaurants—each with their own spin on the classic steak frites. 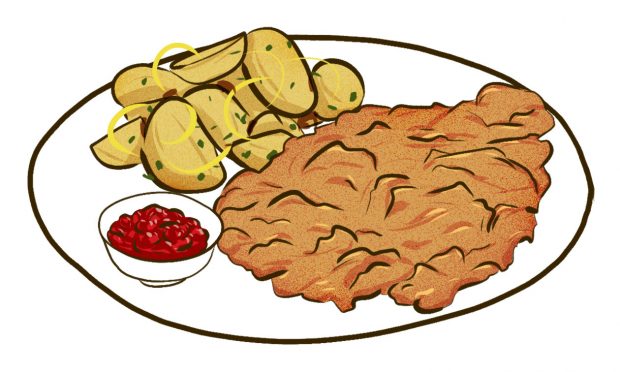 You take veal and beat it wafer-thin with a meat tenderizer. Then you cover it with spiced wheat and fry it in a lake of butter, making sure to toss it about. You might think you end up with a greasy and unappetizing lump of butter-meat but what you actually get is a large golden-brown bit of magic on a plate.

Add fries. Eat. It’s the best part about Vienna. It’ll come with any variety of potatoes (kartoffel) whether mashed, broiled or in a creamy potato salad. 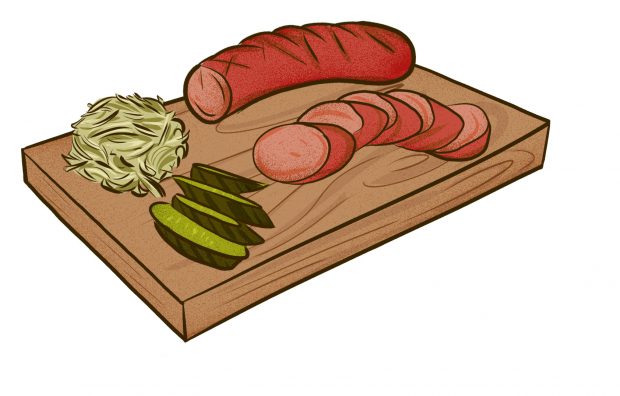 I don’t know many words in Polish, but kielbasa I know. It’s sausage. And it’s served either boiled or fried, depending upon the type of kielbasa you’re eating. With bread and mustard (and sometimes fried onion) and served with a side of potatoes, sauerkraut and pickles, it’s a tasty meal that will cure any hangover. You’ll find it at snack stands throughout Warsaw, or at traditional Polish restaurants.

Check flights to all these tasty cities with Dohop, where you can also book hotels and rental cars.