Home » Europe » Netherlands » Amsterdam » The Search for Awesome in Amsterdam

Woot! My weekend in Amsterdam may have ended, but that adrenaline I picked up after days of filming, fun and new friends is still rushing through. Even more so because I’ve got the first video diary from the trip to share with you!

With a reputation for drugs and red lights, Amsterdam is probably one of Europe’s most popular weekend destinations. But when I visited this time (my first time!) with STA Travel, I was determined to get past the tourist highlights and see if Amsterdam could exceed my expectations. Short story: it did. Amsterdam is awesome.

To be completely honest, I wasn’t expecting to find that many cool things to do in the ‘Dam. I thought it was all about late-night parties, drunk revelry and coffee shops. Turns out there’s a lot more to the city and if you take a peek at the video below, I think you’ll see what I’m talking about. And just in case you’re not convinced, below are my top tips for finding all the awesome in Amsterdam. No matter how many days you spend in Amsterdam, you’re sure to have a fantastic holiday!

10 Cool Things To Do & See in Amsterdam 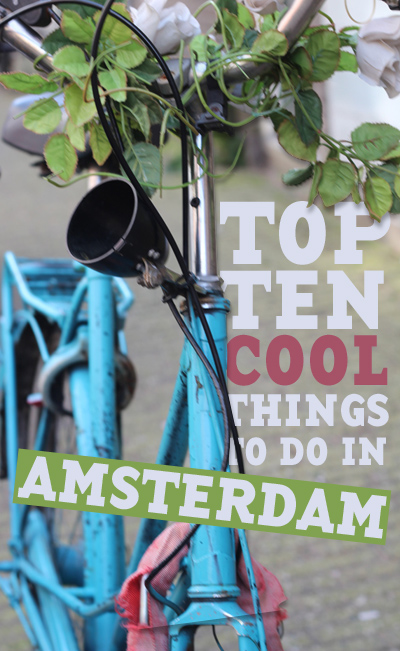 My Amsterdam travel tips might seem a bit out of the ordinary — but that’s the point! I want to show that there’s much more to Amsterdam than the typical tourist sites. And in fact, in my weekend in Amsterdam I ended up missing out on a lot of the major tourist sites and instead focused on having a good time and seeking out unexpected adventures. Here’s what I found!

In a city as famous for its bicycle culture as anything else, this might seem a bit obvious. But seriously: one of the best ways to have some fun in Amsterdam is to get on a bike and see the city on a fixie. You can go farther and see more than if you’re on the tram or a bus. Just be careful: the bike lanes can get a bit crowded!

Read more about cycling in Amsterdam on Wikipedia or check out STA Travel’s list of tours and sightseeing tips which include bike tours.

De Pijp is a former working class neighborhood which has seen its share of gentrification over the years. And you know what that means! Now it’s a hipstery ‘hood with cute cafés, underground bars and street art. Also cool in this area is the Albert Cuypmarkt — a daily food market with cool shops and great street food.

Make sure to visit the Albert Cuypmarkt (open every day except Sunday from 9-6pm) to find quirky clothing, street food and fresh fruit & veggies. And for a bit of fun at night, check out the bar Gollem which sells local brews.

Go for a stroopwafel (the most delicious cookie EVER) at the Albert Cuyp market — or you can get them at many cafés in Amsterdam because they go so well with coffee. You’ll also want to try other Dutch food specialities such as poffertjes (small pancakes served with powdered sugar), bitterballen (fried meatballs of ghoulash or other fillings) and cheese (gouda is the local speciality). After my weekend in Amsterdam, the biggest takeaway for me was how good the food can actually be in the Netherlands. I didn’t really know what to expect but the food in Amsterdam was definitely top quality! (Even if some of my meals included 5am kebabs and burgers!!)

Visit the restaurants in the Jordaan neighborhood for an eclectic mix of styles and check out the Amsterdam Foodie blog for restaurant reviews.

4. Go to a speakeasy

While there are plenty of beer bars in Amsterdam, there are also more than a few cool cool places for cocktails. It’s all a matter of knowing where to go, but here’s an easy tip: Door 74 accepts reservations (see here) so all you have to do is find the hidden entrance along Reguliersdwarsstraat.

Check out Shoshannah’s blog, Awesome Amsterdam, for a list of the best cocktail bars.

5. Lounge about in Vondelpark

Just a beautiful, big green space, Vondelpark is one of the coolest places to hang out on a sunny day in Amsterdam. And since 2008, it’s apparently legal to have sex in the park (as long as it’s nighttime and you don’t leave behind any condoms). Not really sure why they needed a law about that, but hey — that’s Amsterdam for you.

Check out the Vondelpark in the summer when there are open-air festivals.

6. Hang out at Hannekes Boom

Along the water, this bar and café has been around since 1662 (that’s a long time!). People pull up to Hannekes Boom along the canal on their boats and end up just chilling out among the picnic tables. There’s music, outdoor seating, fun people, cheap beer and good food. Really: you can’t go wrong here!

If you’ve got a boat, pull up in style. When it gets to be too crowded, just find a seat along the water edge. 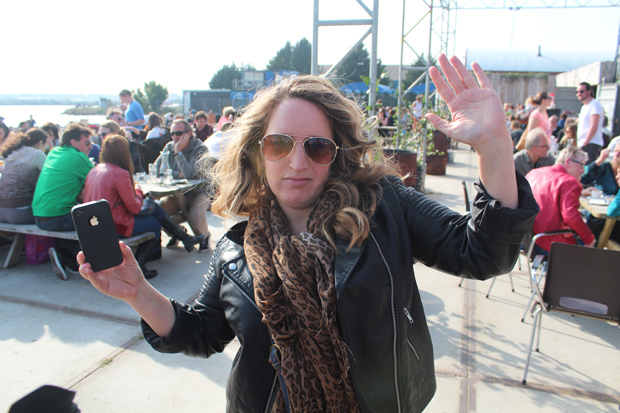 Most people when visiting Amsterdam, leave the Centraal station and head straight for the Red Light District. But instead of doing that, if you turn around and go out the back of Centraal station you end up at the ferry port. There you can catch a FREE 20-minute boat to Noord (NDSM). Once on the northern side of the city, you’ll find warehouses full of art projects & artists spaces, a skatepark, festival grounds and shipping containers that have been converted into beachside bars & restaurants. Über cool.

Check out the bars Pllek or Cafe Norderlicht for cool places to chill out on a sunny day.

8. Check out the street art on Spuistraat

This street in central Amsterdam is full of cool street art and graffiti. Bring your camera because some of it is definitely photo-worthy!

This area is a hot mess — really. I wasn’t sure what to expect of it before seeing it for myself…and it ended up being one of the more surprising things I saw in Amsterdam. Sure, I guess I always knew sex was easy to come by in ‘Dam but it was still a bit weird to see it all right there.

STA Travel offer tours through the Red Light District which visit places like the Sex Museum, but if you want to experience it on your own, I recommend staying at a hostel like the famous St Christopher’s Inn. There you’ll be in the thick of things. The atmosphere (fun, loud, lively) is definitely infectious! (Let’s hope that’s the only thing…) 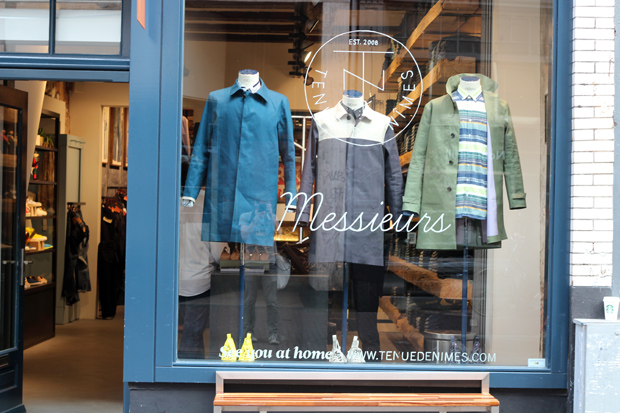 Shoshannah from Awesome Amsterdam told me to visit this street (and the nearby Jordaan neighborhood) on Sunday morning and it was a definite highlight! There were a lot of cool shops selling everything from fine Dutch cheeses to cool mens clothing. There was even some street art along the way. Plus with bars, cafés and restaurants all open, it was a great place to just wander around and get lost.

Check out Vinnie’s Deli for a bit of pretentiousness — though the food is great (and healthy!). Just take a walk down this street and you won’t be disappointed with what you find!