London is a great city for experiencing almost everything and we have to thank its incredible amount of diversity for that. Big cities like Paris, Berlin, New York and London are hard to imagine without the influence of migrants, who came from far away and brought their culture with them.

In my last trip to London, I was running from meeting to meeting, but I had some free time to visit some new places. I wanted to watch a West End musical (of course, Wicked! is my favorite, but I decided to see something new) and one I ended up going with was Miss Saigon, currently playing at the Prince Edward Theater.

The musical has a plot similar to the one of Puccini’s Madame Butterfly. It tells the story of a Vietnamese girl who falls in love with an American soldier during the times of the Vietnam war. I thought it was interesting to see a modern version of the story (after watching the trailer in YouTube) and I was curious about how Vietnam would be portrayed in the play, considering it’s a country that I know relatively well. (I spent a month in Vietnam visiting family and backpacking back in 2011).

The musical, as expected, was honestly great. And there was a scene, right in the middle of the play… It was during a moment when people are trying to escape Vietnam, storming the USA Embassy. Screams and emotions and people with dreams trying to leave the country. To be free. Typical me, I cried, of course. Disregarding politics, I think freedom is an ideal we all have. The scene reminded me of a story I heard recently in Prague. The story of the East Germans who tried to escape the USSR and sought refuge in the West German embassy in Prague. The scene also reminded me of other conflicts that force people to move and go away, from Palestine to México. It was a deeply moving scene, and quite cinematic too.

After the play, I visited London’s Chinatown for a late dinner. London’s Chinatown is fairly recognizable. It’s in the middle of the city where everything is different, from the Chinese newspapers to the facades of the buildings. This is what diversity adds to a city. It’s not just the culture and the people, it’s also the scenery. London’s Chinatown is just a couple of blocks away from the gay area of London (hellooo Soho!), separated only by Shaftesbury Avenue (yes, the one of the Harry Potter movies). 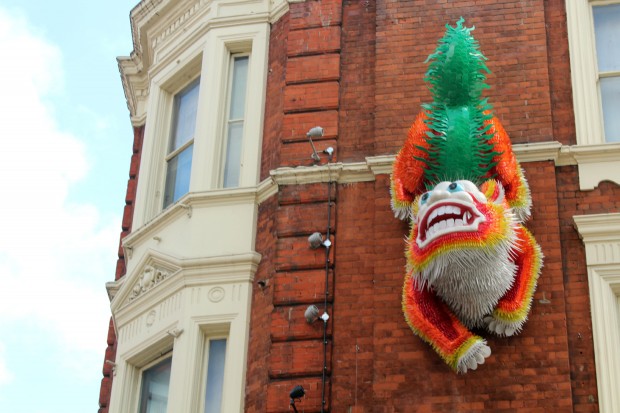 It’s so difficult to imagine London without this Asian influence (not only China and Vietnam, but even India) just as it would be to imagine Berlin without its Turkish influences. If you want to see just a sample of London’s incredible diversity (and maybe also taste some of it), then the only thing you have to do is to walk around Brick Lane on a Sunday, during the market. Choices are innumerable. Everything I sampled when visiting last month was not only delicious but also affordable. There were Argentinian empanadas, food from Sri Lanka, Thailand, Cuba, Japan, Jamaica and even Germany. And that’s just what I nibbled on and shared for lunch; there was so much more!

For me, it’s really hard to think about a world without migration and without this type of cultural influence. I really don’t understand those people who oppose immigration based on economic principles, especially considering their facts are probably wrong. While in London this November, the TV and the newspapers seemed to be plastered with stories about the side effects of European migration to the United Kingdom. But everywhere in the city, it was clearly visible that there are people from every single country in London. Working, making things happen and sharing their cultures and their stories.

I’ve always loved London because I feel it’s one of the more diverse cities of the world. Certainly more diverse than Berlin. You see it the streets, the faces, the languages, the clothes. Foreigners add so much to their countries. Why are some people unable to see this? I think the world should be like a huge Brick Lane; one where everyone is different and welcomed, no matter where you come from or who you are. I love that experience of difference and diversity. I mean, we travel because of that, no?

Let’s Adore and Endure Each Other – Street Art in East London, near Brick Lane

Plan your Stay in London

Disclosure: This article was written by myself and all views are my own. Please get in touch if you have questions about the advertising on travelsofadam.com.