I’m about to fly back to America for the Thanksgiving holiday so thought I’d share some of the funny things I’ve noticed while living in Berlin as an “expat” (but please don’t call me that in public!). These are 7 funny German things I’ve learned about since living in Berlin…

I don’t fully understand why but apartments in Berlin (and Germany, too, I believe) aren’t numbered. Instead, apartments are recognized by their owners’ name. While I can’t tell my friends to just ring the buzzer for Apartment #3, they’ve got to know my name (or the name of whose apartment I’m subletting). It’s much more personal but a lot less useful in my opinion. Still, I kind of like it.

History is everywhere and nowhere at the same time

Berlin…berlin berlin berlin. The city’s name is one I’ve heard, read and seen a million times. History has played a big role in shaping Berlin. There are hundreds of museums in Berlin centered specifically around its long, complex and undeniably interesting history. But at the same time the city is very much forward-looking. While there is a respect and presence of Berlin’s history all over the city, many people here don’t dwell on the past so much but instead look to the future. 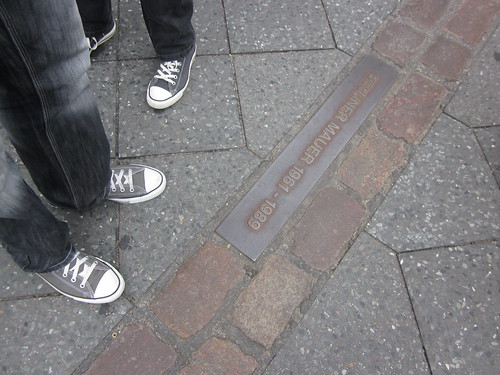 It seems to be some sort of fascination in Germany (or Berlin, specifically) to embed history within the sidewalks. There are embedded plaques in the sidewalks in front of many buildings which display the names of Jewish families who once lived there—a memorial to the Holocaust. These plaques are literally everywhere. My little street in Kreuzberg is filled with them.

Besides the plaques, the route of the Berlin Wall has been completely enshrined in a brick path that snakes through the entire city. Again, the wall once ran down the street in front of my apartment building and everyday I step over what once was a border. I walk past these things everyday and sometimes I think about the past, but mostly I’m thinking of the future. Berlin has so much potential and that’s why I love this town. 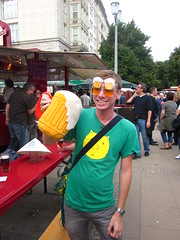 Don’t ask. This is me at the Berlin Beer Festival over the summer.

Free tissues at the pharmacies

Pharmacies here always give you a free pocket-size pack of tissues with just about every purchase. It’s a nice gesture. Not sure why they do it. But, hey, it’s free so I’ll take it.

For some reason, Germans prefer squares to rectangles when it comes to sleeping—funny, no? Pillows are rather large rectangle shapes rather than those of the more horizontal persuasion. A small little design quirk but maybe there’s something to it.

Germans are quite notorious for following the rules. It’s a stereotype, yes, but I’ve found that many of my German friends are quite content to follow the rules when it comes to jaywalking. Red light means stop; green means go. I think I’ve shed a bit of my eagerness (Americanism?) and actually enjoy stopping when I’m supposed to stop now myself. 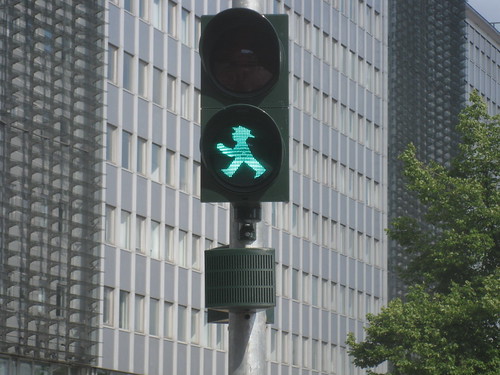 I’ve also noticed some fierce debates about the honor system on Berlin’s public transportation. You see, there are no ticket barriers to get on and off the trains, buses or trams. You’re just supposed to have a ticket (which you can buy on the platforms). Many people—coughcough—don’t always buy a ticket and sometimes ride the train “black” (ie, without a ticket). There are of course people who patrol the trains every now and then and that’s how they keep the system working. But it still amazes me to think that there’s no defensive controlling of the ticketing. Yet the system works.

The German economy isn’t what it seems

With all the talk about financial crises and economies, Germany inevitably comes up. I won’t pretend to know much about the German economy (or the European one for that matter), but I have learned quite a lot since living in Berlin. I’m still trying to figure out more, but one of the strangest things I’ve learned is that Germany doesn’t actually have a national minimum wage. (View a list of countries and their minimum wages on Wikipedia.) As a bleeding-heart liberal, this pretty much infuriates me. I won’t get into it here.

Expat culture is alive and thriving

Regardless of all the funny little German things I’ve learned since living in Berlin, this city is certainly interesting and I hope to stick around. As a foreigner in a foreign city where I knew very little about the culture, language or traditions, I’ve certainly been lucky to get the chance to stay here. One of the most useful resources I had to help with the transition was CouchSurfing.org.

The CS forums are one of the best places to find interesting things to do and meet new people. Just about everyday there are people posting events such as whisky taste testings, blackjack games and museum outings. It’s some of the best ways to meet other expats and to find out about what’s happening around town. I’ve also used it to post questions and almost always I get a quick reply and answer.