The Berlin, Tel Aviv connection: why these two cities are so cool

It might not be immediately apparent—especially to outsiders—but Berlin and Tel Aviv share a special bond. There’s no doubt that Germany and Israel have an historically important relationship, but the two countries’ central cities are much more connected than might be expected.

Berlin, the political capital of Germany, is more than just government and history. It’s also one of the trendiest cities in Europe and, maybe the world. Tel Aviv, though not Israel’s official capital is without a doubt the cultural capital of the small Jewish nation. Tel Aviv is the capital of cool for much of the Middle East, maybe the whole of the Mediterranean.

And though Berlin and Tel Aviv don’t share the same climate, time zone, or city size, they’ve got plenty of other things going for them that more than make up for their differences. Both cities are seemingly set up to become international hotspots for the cultural and creative—if they’re not already at the top of those lists. Here’s what makes both Berlin & Tel Aviv so cool. 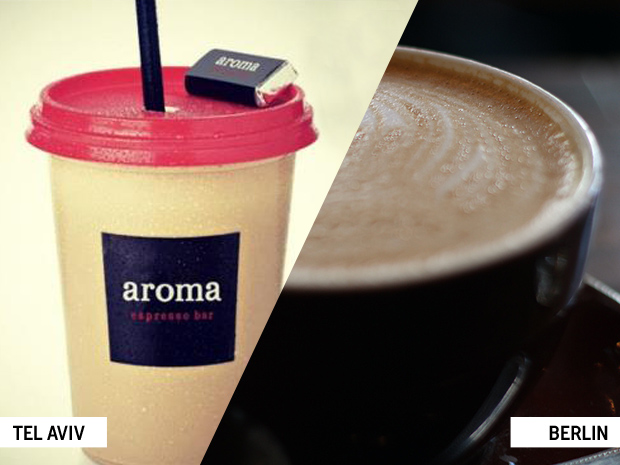 A coffee culture served up in both cities

Coffee fuels creative types almost as much as inspiration and brainpower, but in both Berlin and Tel Aviv, coffee seems to flow as freely as the cheap beer. So much so, that both cities have their pick of 24-hour cafes for those that want to burn the midnight oil. In Berlin you’ve got Mein Haus am See—a 24-hour cafe and coffee shop (with free wifi) that caters to the many hipster Berliners, in addition to the Macbook-filled St Oberholz across the street. In Tel Aviv, there’s the always popular 24-hour The Streets, a cafe & restaurant with wifi and good music on the stereo.

The Tel Aviv coffee culture is almost legendary. With so many sunny days in the spring & summer, iced coffee is inevitably the way to go. My favorite place is the Saquella cafe across from Dizengoff Center on King George street. It’s hard to miss and they serve the best iced coffee (it’s more like a frappe or milkshake) in Tel Aviv.

In Berlin, with so many creative professionals making a living out of daytime freelance jobs, there’s a big culture for coffee and coffee shops. The Barn is often cited as one of the best places to find coffee in Berlin, but I’m also partial to Bonanza Coffee Heroes. TimeOut Magazine has a great listing of Berlin’s coffee scene. And one coffee shop that you’ll find in both Berlin and Tel Aviv is the Israeli chain, Aroma. 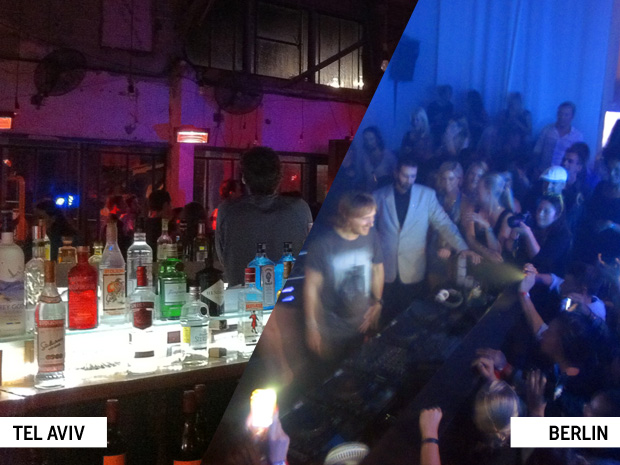 Both Berlin and Tel Aviv host any number of international DJs for what are truly legendary parties. In Tel Aviv, the DIY Alternative Guide regularly posts information on the party scene there, while BANG BANG BERLIN publishes regularly bout Berlin’s club scene. The summer is obviously the more popular time of year for nightlife in each city, though winters are surprisingly alive in both Berlin & Tel Aviv. With 24-hour bars and clubs, neither city is boring—any time of year.

Besides having non-stop nightlife, there’s also overlap in the types of bars you’ll find. So much so that the drink that fuels Berlin’s club kids—Club Mate—is even available in Tel Aviv. It’s not a common drink outside of Berlin, but I found it for sale inside the Anna Lou Lou bar in Jaffa. 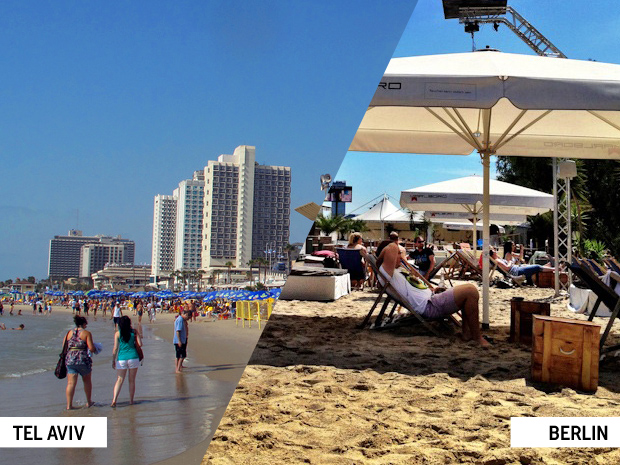 Both Berlin and Tel Aviv have beach bars. Yes, Berlin’s got a beach despite being hundreds of kilometers from the coast! The River Spree winds through Berlin (the city has more bridges than Venice, did you know?) and during the summer, the river banks are arguably one of the best places to chill out in the city. There are plenty of beach bars and clubs located along the shores of the river as well. Sure, the beaches in Berlin don’t beat the Mediterranean coast in Tel Aviv, but hey, at least the city’s trying to make the most of what they’ve got!

Special thanks to rearviewmirror.tv for the photo of the Berlin beach bar 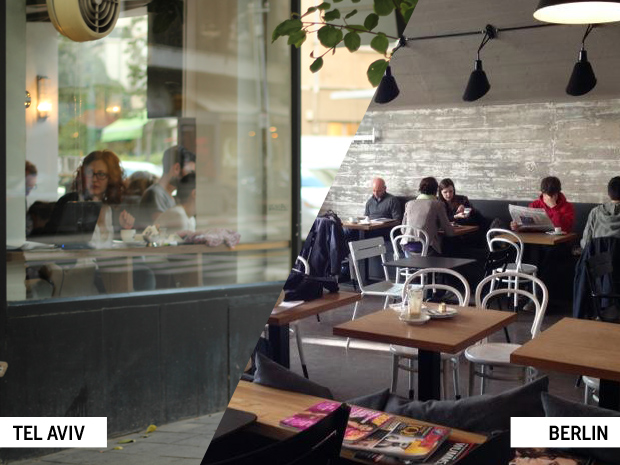 With Google headquarters in both cities, it’s no surprise to find out that Berlin & Tel Aviv are technologically-savvy cities. Plentiful co-working spaces, a thriving start up scene and an influx of creative professionals are just some of the reasons that make both cities standouts in the technology sector. Tel Aviv has been an established hotspot in the start up scene for a while now, and Berlin’s reputation is quickly rising.

For co-working spaces, Berlin has the Agora Collective, Betahaus and Co-up and Tel Aviv has Misanthrope, The Junction and the TechLoft. And each has many more! 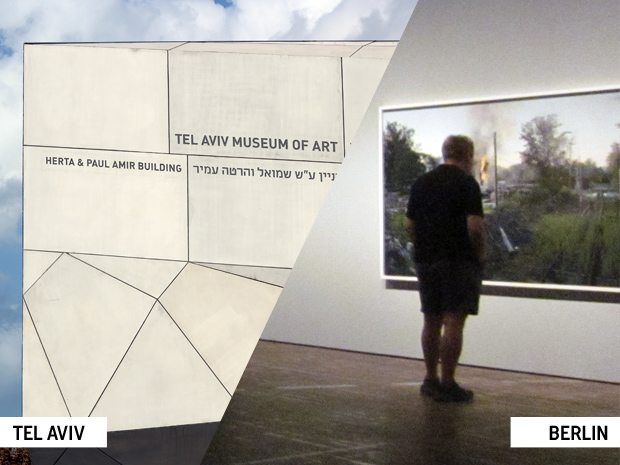 Neither city is necessarily renowned for their big museums or art collections, but Berlin and Tel Aviv each have quite a bit of support for independent artists and galleries. And their respective city museums aren’t bad either. Berlin’s got well over 100 museums dealing with archaeology, culture (the Film Museum is pretty cool), modern & classical art—just to pinpoint a few topics. Tel Aviv has it’s fair share of history museums, as well as an impressive Design Museum. The city’s largest museum, the Tel Aviv Museum of Art regularly hosts international exhibits. 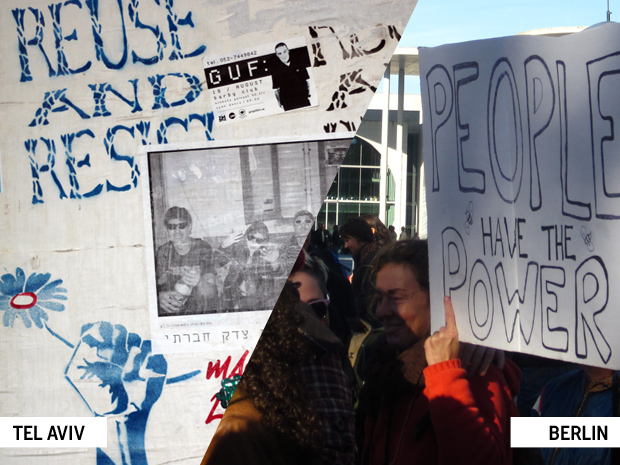 Both Berlin & Tel Aviv have a bold history, ones marked with social change and political movements. Tel Aviv’s Rothschild Boulevard was the site of the popular Tent City protests two years ago, and in the past year, African migrant workers & refugees have taken to the streets. Political activism is increasingly more alive in the Middle Eastern city that is often referred to as being in a “bubble.” Berlin, for its part, is no stranger to activism. With its sordid history, and as the capital of Germany, the city hosts demonstrations & protests almost every week—if not every day.

In both cities, much of this activism manifests itself as graffiti and street art. In Tel Aviv, you’ll find street art in both Hebrew and English (and maybe even some Arabic), purple eggplants, stencils and painterly murals. Berlin covers the gamut with as much political street art as pretty graffiti. 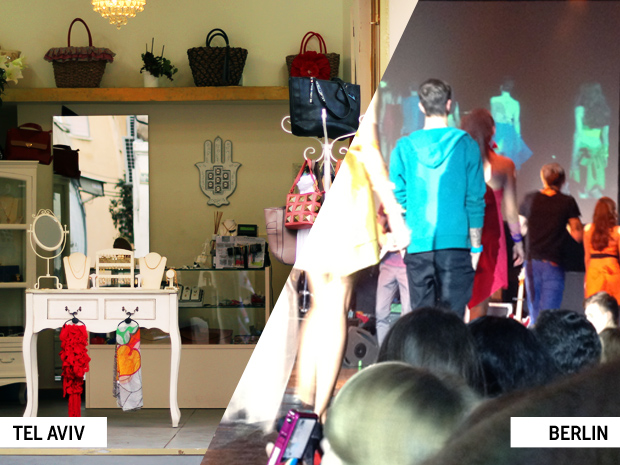 A sense of style

In cities as hedonistic as Berlin and Tel Aviv, the cultures seem to thrive on a certain level of independence and culture. That’s probably why indie designers and artists find such a strong sense of style in both cities. While I found Tel Avivians to be generally lazy in regards to street style (oftentimes in the summer, people pretty much just wear a swimsuit and call it a day), that doesn’t mean the city doesn’t have its fair share of fashion designers. Just walk along Shenkin Street and I dare you not to shop!

In Berlin, Fashion Week is oftentimes a big deal for the city when designers flock to the city. But with all the hipsters and design-savvy individuals in Berlin, the city’s fashion is often photographed on more blogs than you’re able to count (try überlin). Berlin is also home to the annual Bread & Butter trade show each winter—a great showcase for t-shirt designers. 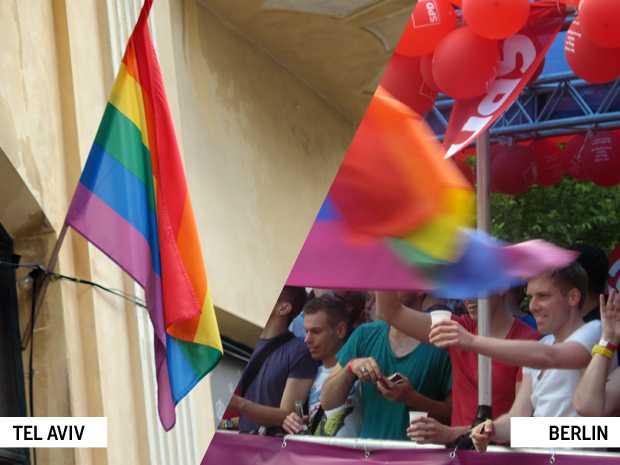 Hotspot for the gays

Maybe it’s the open-minded, liberal attitude from each city. Or maybe it’s the legendary nightlife, the relaxed atmosphere and the young demographics. But both cities have been declared among the top travel destinations for LGBT travelers. Tel Aviv’s annual gay pride on the beach is often one of the most photographed around the world (something about those Israeli men…), and Berlin’s Christopher Street Day is one of the largest pride events in Europe.

Germany and Israel share an incredibly unique bond—tied together by an unfortunate history and plenty of political relations in the past 20+ years. The people who cross between the two cities—immigrants, tourists, expats and visitors—are only strengthening the bond. A Facebook group of Israelis in Berlin has over 4,000 members and there are new Israeli immigrants to Berlin every year. The Israeli embassy in Germany even maintains a blog about Israeli events in Berlin and beyond – check their blogroll for additional resources.

Germany and Israel are connected with several flights a day from numerous budget airlines. And while each city shares many similarities, the atmosphere of each is unique and original—so much so that you can it’s hard not to notice how each city is hip in its own way.

Check out my hipster city guides below 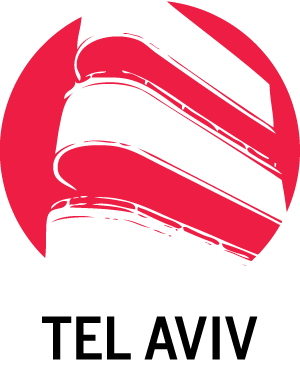 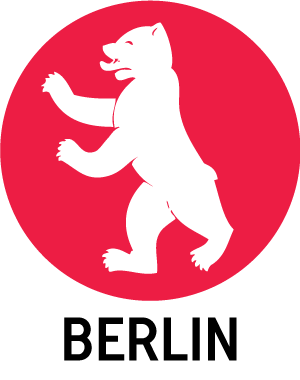 Have you visited either Berlin or Tel Aviv? What were your impressions?